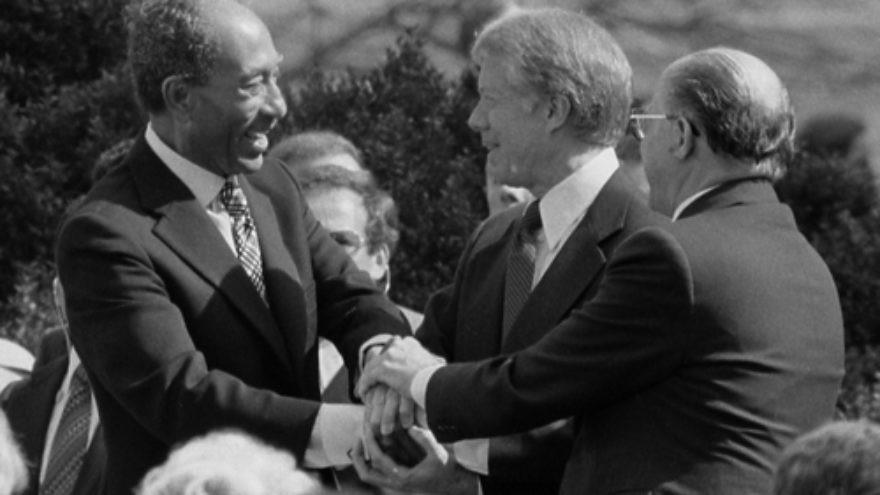 From left: Egyptian President Anwar Sadat, U.S. President Jimmy Carter and Israeli Prime Minister Menachem Begin at the White House for the signing of the 1979 Egypt-Israel peace treaty. A photo of the peace treaty's signing was added to the new edition of “The Geography of the Arab World and the History of Modern Egypt,” a ninth-grade Egyptian textbook. Credit: Warren K. Leffler via Wikimedia Commons.
Republish this article
1179 WORDS
Spread the word.
Help JNS grow!
Share now:

(January 7, 2022 / MEMRI) In an article in the London-based Saudi daily Al-Sharq Al-Awsat, Jordanian journalist and former culture and information minister Saleh Al-Qallab wrote that the Arab states’ perception of Israel recently underwent a historic shift. Weary of the decades-long conflict with this country, most of the Arab states no longer regard Israel as the “Zionist enemy” but as an integral part of the region. Al-Qallab urged Israel to take advantage of this turnaround and act towards the establishment of a Palestinian state, thereby providing its own people with stability and security. He also advocated forming a regional peace camp to defend the changes that have taken place against the extremists who seek to sabotage them, chief among them Hamas, the Muslim Brotherhood, Iran and the militias loyal to it.

The following are translated excerpts from Al-Qallab’s article:[1]

“Israel has apparently started to realize that the one who benefits from the weakening of Fatah and the Palestinian Authority is Hamas and the other miniscule, wretched terrorist movements that have nothing but a name and are supported by Iran, Syria and some say also by the Iraqi militias. Having become part of the Middle East, with a significant diplomatic and political presence in several Arab countries, Israel must stop harming [the P.A.] and weakening the Palestinian leadership headed by [leader] Mahmoud Abbas, who was and remains more willing to conduct historic negotiations with Israel that any other Palestinian leader, past or future, including president Yasser Arafat.

“Israeli leaders, headed by Binyamin Netanyahu and his group of extremists, who wave the slogan of ‘[Israel] from the river to the sea and far beyond [the river],’ opposed every solution to the Palestinian problem, including [the solutions] proposed by international elements, and held on to Jerusalem, Al-Aksa and the Dome of the Rock. This continued until it became clear that the main ones who profit [from it] are Hamas and the other extremist organizations, whose role has been to put up barriers and create unrest, as well as some rejectionist Arab countries, some of which used and continue to use the Palestinian political refusal as an excuse to oppose the forces favoring peace, both Palestinian and Israeli. The Israeli extremists already [managed to] eliminate the symbols of the peace process, namely [the late Palestinian] president Yasser Arafat and [the late Israeli prime minister] Yitzhak Rabin. [Rabin] was assassinated first, and Arafat followed … 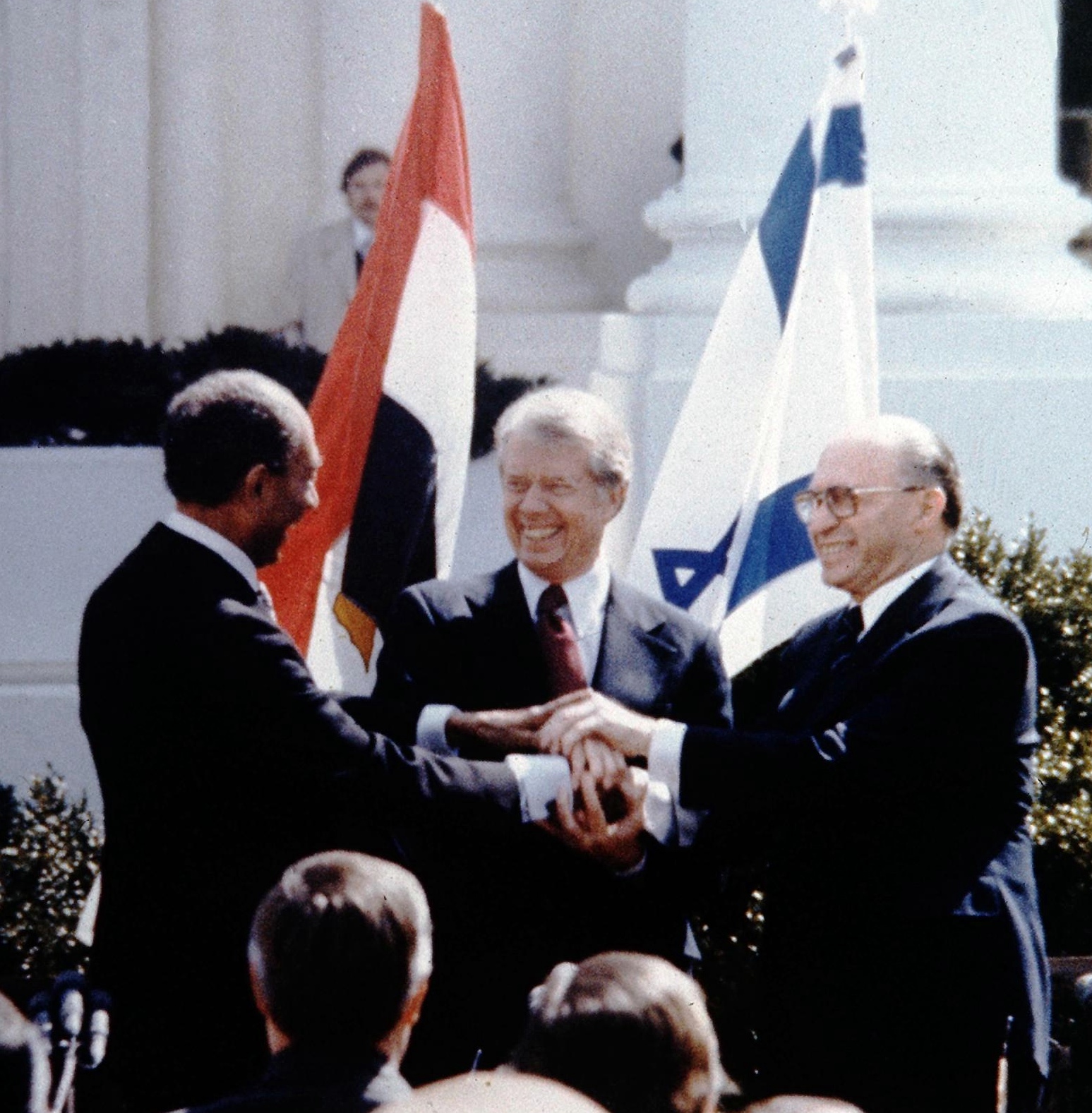 “[When] the Israeli pressure on Abbas came to a head, Hamas thought it could ‘take the camel with all its load,’ as the saying goes. The Muslim Brotherhood-affiliated [Hamas], which still seeks to eliminate Fatah and the PLO, began preparing to supplant Fatah, the Palestinian National [Authority] and everything else. But the international [community] and America intervened, trying to convince the Israelis that their conduct bordered on political and historic foolishness, and that if they stuck to their policy and positions, aimed at ‘thawing’ [the relations] with the Palestinian resistance movement [Hamas], this would place them face to face with the most extremist among all the Palestinian elements and rejectionist organizations.

“This convinced Binyamin Netanyahu and the extremist right-wing Israelis that they must take advantage of this historic moment, turn their backs on Hamas, and treat it and other organizations like it as terrorist organizations. [They understood] that they must take advantage of the Palestinian situation, which was now ready for a historic change [of its position] on this conflict that has destabilized the Middle East throughout these long years.

“In the same period, Israel also managed to overcome the situation that had characterized it since the 1980s–of a country trapped between the river and the sea, as it liked to say–when [Israeli] embassies were opened in several Arab states and economic and security relations with them [developed].

“Therefore, it will be political foolishness [on Israel’s part] not to seize this historic moment and become part of the Middle East–as is [already] happening on the ground today, for the narrative of the ‘Israeli enemy’ is completely gone. [In fact,] some people treat [Israel] as an Arab country because the Arabs of 1948 [i.e., Israeli Arabs] have become a major element in the Israeli political [scene].[2]

“In practice, the ones who benefited from all of this, in addition to Israel itself, are President Mahmoud Abbas, the P.A., and, of course, Fatah and the Palestinian organizations affiliated with it, since Israel now treats Hamas as a terrorist organization, and its [members] are persecuted and hounded throughout historical Palestine. At the same time, the Israelis have begun to treat [other] Palestinians as present and future partners, out of the [assumption] that there is no alternative to establishing an independent Palestinian state in the 1967 borders, with East Jerusalem as its capital.

“The hoped-for Palestinian state … has become a certainty, and it will surely be established alongside the state of Israel. This is certain because most of the Arab states already support this historic turnaround. The rejectionists are now counting on Hamas, the Muslim Brotherhood, Iran and all the sectarian organizations and factions subordinate to it, who now control many major Arab countries, such as Iraq, Syria and Yemen …

“What is certain is that the ones who profit from all these changes are the Palestinian people, whose hoped-for state will surely be established now, and the Israelis, who have started to gain recognition and are rid of this historic conflict. Additional beneficiaries are the Arabs, who are weary of this conflict and who have been targets for extortion by the countries of Western Europe, the United States, and several other Muslim and non-Muslim countries.

“This is a truly historic turning point, and the Israelis must understand that they have become part of this region and part of the Middle East, and that the wise among them should defend this turnaround and not let the unrestrained elements within the Zionist movement destroy all these achievements. For the first time in many years, during which there were many destructive wars, Israel has become part of the Middle East and a state accepted by most of the Arab countries. This [achievement] must be maintained. Israel has embassies in many Arab countries, and the Israeli people are entitled to enjoy stability and not go on living in tanks. This requires Israel to recognize an independent Palestinian state on the 1967 borders, whose capital is East Jerusalem, with Al-Aksa, the Dome of the Rock and the Church of the [Holy] Sepulchre included in its [territory].

“There must be a genuine [regional] peace camp, which will defend all these historic accomplishments while taking into account that the rejectionists–Hamas, the Muslim Brotherhood and the countries and organizations that side with them–will always continue to try to destroy this historic turnaround. The Eastern and Western superpowers should [also] defend it, for the forces of evil will continue to oppose this historic turnaround, that has arrived after all these long and costly years.

[2] Apparently a reference to the incorporation of the Ra’am party, headed by Mansour Abbas, in Israel’s ruling coalition.

This article was first published in MEMRI.