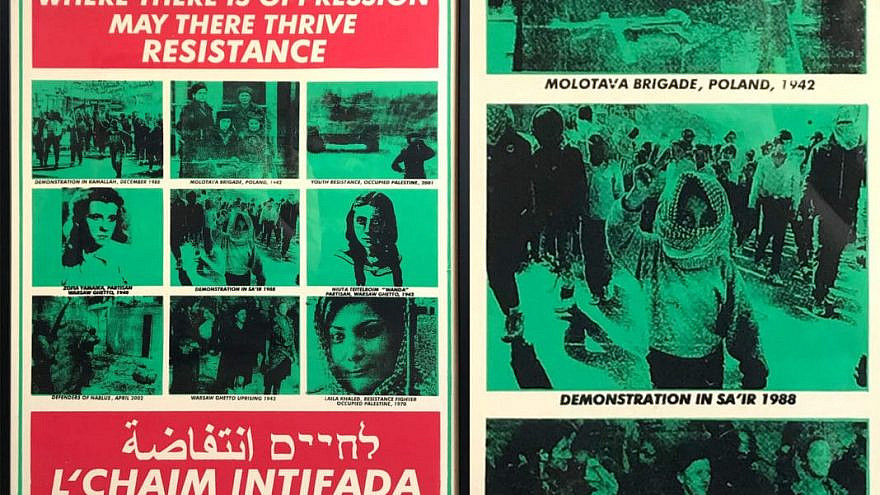 A poster featured in a since deleted tweet posted on Dec. 8, 2020 by Jewish Voice for Peace. Source: Screenshot.
Spread the word.
Help JNS grow!
Share now:

(December 10, 2020 / Jewish Journal) Jewish Voice for Peace (JVP), an organization that supports the BDS movement, has come under fire for a since-deleted tweet that appears to glorify the First Intifada.

The Dec. 8 tweet featured a poster from a member stating “where there is oppression, may there thrive resistance” and “L’Chaim Intifada.” JVP described the First Intifada in the tweet as “a series of mass protests against Israeli settler-colonialism and occupation.”

“277 Israelis, mostly civilians, were murdered during the First Intifada,” tweeted Avi Mayer, director of global communications for the American Jewish Committee. “What do you call a group that celebrates the deaths of Jews?”

He added in a subsequent tweet that the poster featured in the JVP tweet “equates Palestinian rioters with partisans during World War II, suggesting that Israel is akin to Nazi Germany. As a reminder, this is defined as a form of antisemitism by the [International] Holocaust Remembrance Alliance.”

The Israel Advocacy Movement, a pro-Israel group in Britain, similarly tweeted: “This utterly repulsive antisemitic tweet from JVP will shock you. In it, they compare the Al-Aqsa Martyrs Brigade terror group and [Leila] Khaled [a terrorist who hijacked a plane] to Jews who resisted the Nazi genocide. This is disgusting, even by their standard.”

International human-rights lawyer Arsen Ostrovsky tweeted: “[The] 1st Intifada was a brutal and violent Palestinian uprising. But trust [JVP] to stand up and glorify the terrorists.”

JVP did not respond to the Jewish Journal’s request for comment.