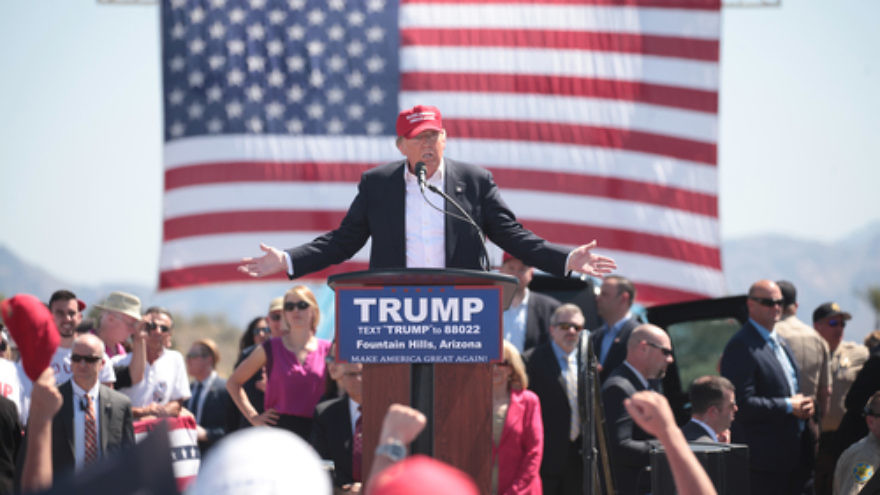 The omission of Palestinian statehood from this year’s Republican Party platform is neither a radical change nor a departure from immutable U.S. policy, as some critics are claiming. In fact, both parties’ platforms have repeatedly changed positions on Israel-related issues over the years, in keeping with the preference of the presidential nominee or the changing mood among their rank and file.

The first time the Republican platform mentioned a Palestinian state was in 1980. In that year’s race, GOP nominee Ronald Reagan positioned himself as the pro-Israel candidate, after four years of clashes between President Jimmy Carter, Israel, and the American Jewish community. The Republican platform followed accordingly: “We believe the establishment of a Palestinian State on the West Bank would be destabilizing and harmful to the peace process.”

The next three Republican platforms echoed these sentiments, characterizing a Palestinian state as “inimical to the security interests of Israel, Jordan and the U.S.,” and rejecting the notion that Israel should even negotiate with “the Palestine Liberation Organization and its homicidal subsidiaries,” much less give them a state.

But four years later, the party shifted again. Four years of suicide bombings, “jihad” speeches by Arafat, and frequent Palestinian violations of the Oslo Accords fueled skepticism among Republicans about Palestinian statehood. The Palestinian Authority’s threats to unilaterally declare a state seemed likely to ignite new turmoil. The 2000 Republican platform asserted: “A unilateral declaration of independence by the Palestinians would be a violation of [the two sides’] commitment [to resolving disputes through negotiations]. A new Republican administration would oppose any such declaration.”

Soon the platform was shifting again, to accommodate a Republican president. In 2002, George W. Bush became the first president to endorse creation of a Palestinian state, and the 2004 GOP platform echoed his position—but with conditions. While embracing “President Bush’s vision of two states,” the platform added that “for such a vision to become a reality, the Palestinians need a new leadership, not compromised by terror…If Palestinians embrace democracy and the rule of law, confront corruption, and firmly reject terror, they can count on American support for the creation of a Palestinian state.”

In 2008 and 2012, the Republican platform again attached conditions to its endorsement of Palestinian statehood. For a Palestinian state to become “a reality,” it said, “the Palestinian people must support leaders who reject terror, embrace the institutions and ethos of democracy, and respect the rule of law.”

Those conditions are the key to understanding this year’s decision to omit the “two states” formula from the GOP platform. For 12 years, Republicans have been waiting for a “new Palestinian leadership,” one that is “not compromised by terror” and “embraces democracy.” Instead, they see a continuation of Arafat’s leadership through his loyal deputy, Mahmoud Abbas. They see the Palestinian Authority inciting terrorism instead of suppressing it. They see a Palestinian dictatorship instead of a Palestinian democracy. It would have been more remarkable, perhaps, if the Republicans had chosen to ignore their own declared conditions and continued supporting a Palestinian state.

The Democrats’ platform, too, has shifted on Israel many times over the years. It went from calling for the “internationalization of Jerusalem” in 1948, to supporting “Jerusalem as the capital of Israel” and urging that “the U.S. Embassy should be moved from Tel Aviv to Jerusalem,” in 1972 (long before the GOP took a similar stand). In their 1968 platform, the Democrats called for “the establishment of a non-provocative military balance” between Israel and the Arabs; four years later, talk of “balance” was dropped and the platform called for “provid[ing] Israel with aircraft and other military equipment in the quantity and sophistication she needs to preserve her deterrent strength.” From 1956 through 1964, the Democrats’ platform called for “the resettlement of Arab refugees in lands where there is room and opportunity for them.” Then that language was dropped.

Party platforms are not set in stone. They change to suit the policies of the nominee or the incumbent president, or to reflect shifts in opinion among the party’s membership. The Republican Party opposed Palestinian statehood for 16 years, and then, in response to the Oslo Accords, reversed itself. Now, after supporting Palestinian statehood for 12 years, the GOP has, in response to Palestinian terror and incitement, reversed itself again. Whether or not one agrees with the Republicans’ position, there’s nothing radical about it; it’s their assessment of the facts on the ground in the Middle East.

Dr. Rafael Medoff is the author of 16 books about Jewish history and Zionism, including “Herbert Hoover and the Jews: The Origins of the ‘Jewish Vote’ and Bipartisan Support for Israel” (with Sonja Wentling).