(August 14, 2022 / JNS) On Aug. 6, a rocket fell in Jabalya in the Gaza Strip, killing seven Palestinians, including four children.

Those with a tidy view of warfare likely viewed Israel as responsible. After all, the rocket fell during a round of fighting between Israel and Gaza’s Palestinian Islamic Jihad, during which Israeli struck at PIJ targets in Gaza and the Palestinian terror group fired rockets toward towns in Israel.

But those familiar with the history of Palestinian misfires might think twice. During a round of fighting last summer, 680 Hamas rockets fell short, landing in the Gaza Strip instead of Israel and killing perhaps scores of Palestinians. In this month’s brief conflict with PIJ, meanwhile, about 200 Palestinian rockets meant for Israeli cities instead landed in Gaza, killing an estimated 15 Palestinians—among them the seven killed in Jabalya, according to radar data released by the Israeli military and an investigation by the Associated Press.

Enter NBC News, which seemed eager to hide this information from its readers, effectively covering for Islamic Jihad by burying, obscuring, and misreporting the facts.

The Jabalya blast that killed Khalil Abu Hamada, one of the seven Palestinians killed and the subject of a somber NBC News human interest piece, occurred at around 9 p.m. that Saturday evening.

The Israeli military had not conducted any airstrikes in the area at the time, it noted, and hadn’t for the preceding two hours. Islamic Jihad, though, had announced a rocket attack on Ashkelon, which lies just to the north of Jabalya, at around the same time as the explosion, AP reported.

Israel released video it claimed showed the Palestinian barrage, in which one of the rockets can be seen drifting wildly off course and falling short.

Watch this failed rocket launch which killed children in Gaza.

This barrage of rockets was fired by the Islamic Jihad terrorist organization in Gaza last night.

Israel also shared radar tracking data showing several misfires from that launch, including the one that hit Jabalya at the time.

Ahmed Tibi, an Arab member of Israel’s Knesset and a staunch critic of Israel, had initially posted on Twitter a photo of casualties from the incident along with a scornful message suggesting Israel was responsible. Tellingly, he later deleted the post, the Jerusalem Post reported.

AP, which sent reporters to Jabaliya, described what was effectively a coverup at the impact site: “When the AP visited the site on Monday, the casing was gone and the hole had been filled in with dirt. Palestinians are usually keen to display evidence of Israeli airstrikes to international media.” The reporters, according to AP, “saw none of the telltale signs of an Israeli strike — the wide craters left by F-16s or the narrow holes caused by drone strikes.” 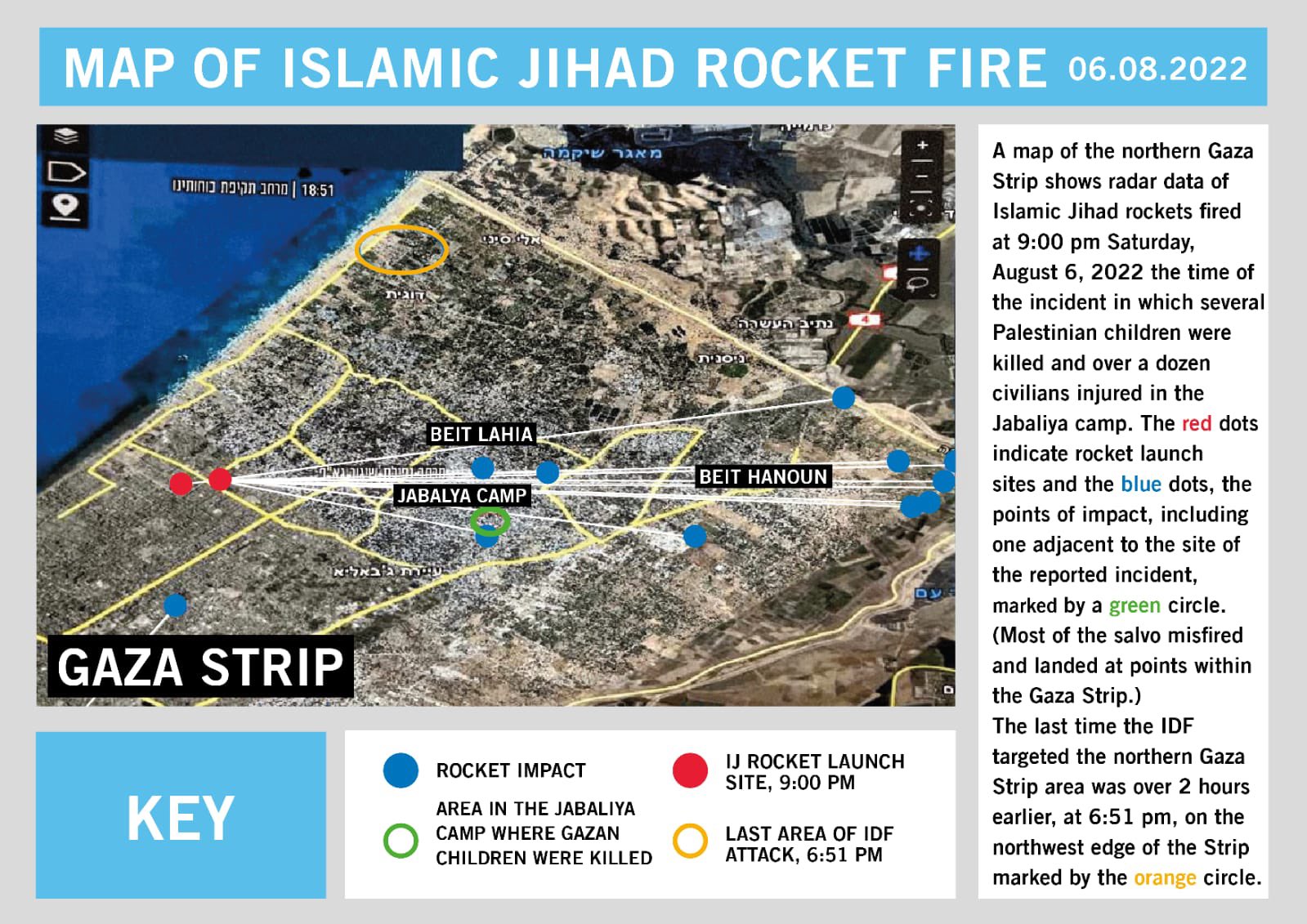 Israeli officials, who accepted responsibility for other strikes in which civilians were caught in the crossfire, were categorical in comments about the Jabalya incident. “A failed rocket attack by Islamic Jihad is responsible for the killing of children in Jabalya,” wrote Lior Haiat, head of diplomacy at the Prime Minister’s Office. Video evidence proves “beyond a shadow of a doubt” that the incident was not the result of an Israel Defense Forces strike. “It has been irrefutably proven that this incident was the result of the misfiring of a rocket launched by Islamic Jihad.” Israel’s investigation “unequivocally showed that this was not an Israeli strike but rather a rocket launched from within the Gaza Strip which fell in the heart of Jabalya.”

AP was more subtle after its investigation, but the message was as clear: Israel’s assessment of Palestinian casualties caused by Palestinian rockets, including the one that hit Jabaliya, “appears consistent with independent reporting by The Associated Press,” the wire service reported.

Clarity, though, was not what NBC News seemed to strive for.

Its piece on the incident, by Wajjeh Abu Zarefah, Paul Goldman and Corky Siemaszko, opened as follows:

“It took five rounds of in vitro fertilization treatments for a Palestinian woman named Najwa Abu Hamadeh to conceive her only child. It took just one missile to take her son away from her forever.”

And over the next 17 heart-wrenching paragraphs, it left readers to believe that the missile was an Israeli one. Israel that caused the mother’s “mourning”; the “screaming”; the “grieving”; the “choking dust and wreckage”; the “search”; the “body”; the “future … wiped away in one short burst.”

Only readers who made it to paragraph 20, past paragraphs of pain and an explicit reference to Israeli jets “hitting Gaza,” would encounter a buried hint. And even then, NBC News seemed intent on concealment. The vividness of the preceding paragraphs suddenly disappeared, replaced by murky writing and misrepresentations.

The final paragraphs of the piece cited Israel and AP, but carefully tiptoed around their most relevant conclusions:

“Israel estimated a total of 47 Palestinians were killed, including 14 killed by misfired Palestinian Islamic Jihad rockets—numbers that could include Khalil.”

This is an error of omission. Israel didn’t say that various Palestinian misfires could have killed Khalil. They said that one absolutely did.

“The Israeli military said it carried out no operations in the area of the Jebaliya refugee camp at the time of the strike that killed Khalil. It released video footage that purportedly showed a barrage of rockets fired by militants, with one falling short.

Why do they again conceal that Israel explicitly said that footage was of the specific incident in question?

“The militant group had announced a rocket attack on the southern Israeli city of Ashkelon, just north of Jebaliya, around the same time as the explosion, according to The Associated Press.”

Why does NBC stop short of sharing other damning details from AP’s investigation, including its statement that its findings were consistent with Israel’s investigation? And might it help readers to understand that Palestinian Islamic Jihad isn’t just a “militant group,” but an internationally designated terrorist organization?

“Israel said Islamic Jihad fired 1,100 rockets toward it in total over the three days [of the conflict], with about 200 of them falling short in Gaza.”

Again, a grave error of omission, in what looks like an attempt to conceal Israel’s specific findings about the subject of NBC’s piece.

“The militant group has not responded to Israel’s claims that some civilians were killed by the misfired rockets. It has held Israel responsible for all the deaths.”

In another error of omission, NBC refers to Israeli claims about “some civilians,” but conceals its unequivocal assertions about the specific civilian that’s relevant to the piece.

“NBC News has not verified the claims of either side.”

Nor has it fairly reported on the claims.

NBC News told CAMERA that its report is fair, and refused to correct or clarify the piece.

Al Mayadeen, a pro-Hezballah satellite television station based in Lebanon, captured video another of PIJ rockets landing in Gaza. In an Aug. 7 clip shared widely online and translated by MEMRI, a rocket is seen being fired from Gaza, spinning wildly and quickly losing altitude before it lands with an explosion close to the cameraman’s position.

It’s no surprise that a pro-Hezbollah station would want to avert its lens from the facts. Islamic Jihad’s responsibility for destruction in Gaza just isn’t part of the narrative. But for NBC News to effectively do the same with its prose—to take pains to prevent readers from learning what Israel and the Associated Press said about their respective investigations—is more surprising. And it’s a terrible disservice to NBC’s audience.

Gilead Ini is a Senior Research Analyst at CAMERA.

This article was originally published by CAMERA.