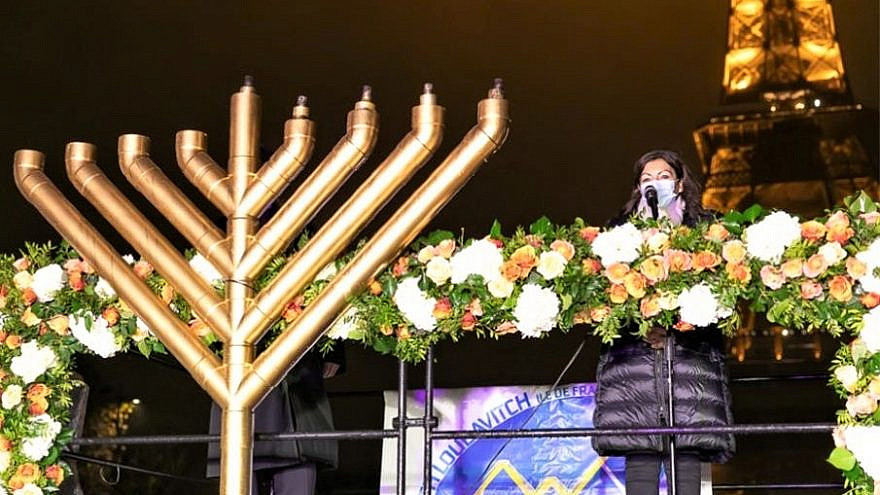 (December 15, 2020 / Chabad.org/News) In most years, the Eiffel Tower menorah-lighting in Paris is an awe-inspiring event that draws crowds in the thousands and is seen by millions on international broadcasts. But with the city in the midst of a lockdown and gatherings curtailed, permits were not forthcoming. It was clear that in this year of the coronavirus, the Eiffel Tower would not have its menorah.

Until the mayor’s office called.

And just like that, the Parisian Hanukkah tradition that seemed to be in danger of being extinguished blazed back into being.

Rabbi Mendel Azimov, regional director of Chabad-Lubavitch in France, who was busy coordinating hundreds of COVID-safe Hanukkah events throughout the capital city and across France, leapt into action.

To ensure that crowds wouldn’t gather, the event would have to be kept quiet, and the proud Jewish community of Paris wouldn’t be able to attend in force. But their representatives could. In addition to Azimov and Hidalgo, notable attendees included Francis Kalifat, president of the Conseil Représentatif des Institutions Juives de France; Chief Rabbi of France Rabbi Haïm Korsia; Ariel Goldmann, president of the Fonds Social Juif Unifié (FSJU); and Daniel Saada, First Counselor of the Israeli Embassy to Paris.

After remarks from the assembled dignitaries, Hidalgo lit the shamash (the “helper candle”), and Korsia kindled four lights on the menorah against the backdrop of the brilliantly illuminated Eiffel Tower. It was yet another example of the global Hanukkah awareness campaign launched in 1973 by the Rebbe—Rabbi Menachem M. Schneerson, of righteous memory—an effort that this year saw some 15,000 public menorahs go up around the world.

And as the small gathering dispersed after the 20-minute abbreviated ceremony, the City of Light shone a little brighter. 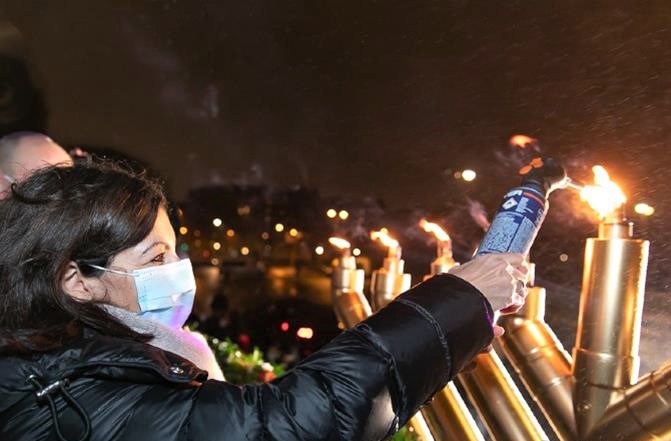 Paris Mayor Anne Hidalgo lights the shamash, the “helper candle,” on the fourth night of Hanukkah, Dec. 14, 2020. Photo by Thierry Guez via Chabad.org/News.
Republish this article in your newspaper or website