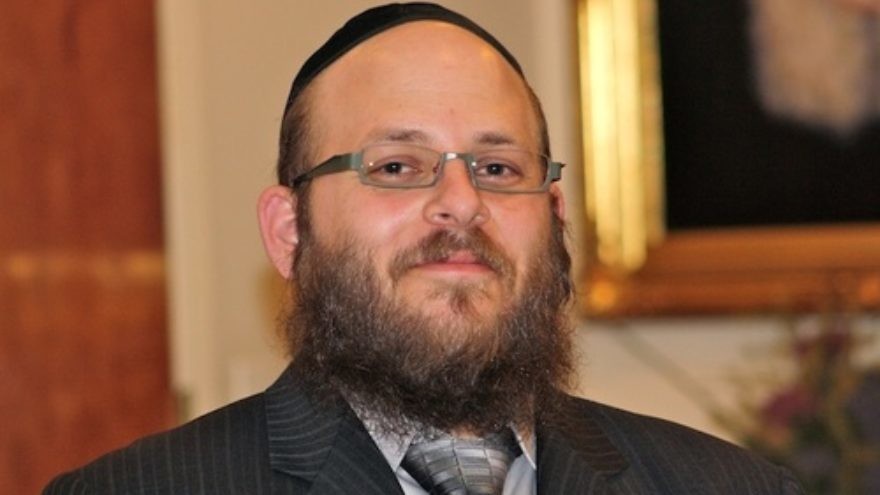 Click photo to download. Caption: Rabbi Menachem Stern, pictured, was sworn in as a U.S. army chaplain in December 2011 following the resolution of his lawsuit against the army over its "no-beard" policy. Credit: Chabad.org.
Republish this article
955 WORDS
Spread the word.
Help JNS grow!
Share now:

The Pentagon has issued a directive that loosens restrictions for U.S. troops who wish to wear religious garments such as head scarves, turbans, and yarmulkes with their military uniforms, or to grow beards. But while the U.S. Department of Defense’s new policy should in some cases benefit Jews, Muslims, Sikhs, and members of other faiths, men and women in the military must still seek special approval from their commanders to be allowed to wear religious garments, and such requests can still be denied.

“The new policy states that military departments will accommodate religious requests of service members unless a request would have an adverse effect on military readiness, mission accomplishment, unit cohesion and good order and discipline,” Navy Lt. Cmdr. Nathan J. Christensen, a Pentagon spokesman, said in a statement.

Prominent constitutional law attorney Nathan Lewin told JNS.org in an email that despite the loosening of the restrictions, the requirement for soldiers to seek permission from their military departments for religious clothing and beards, or the existence of “any requirement of prior approval,” violates religious apparel statute 10 USC 774. Passed by Congress in 1996, the statute allows members of the armed forces to “wear an item of religious apparel while wearing the uniform of the member’s armed force.”

According to Col. (ret.) Rabbi Sanford Dresin, director of military programs for the Aleph Institute and Aleph’s ecclesiastical endorser to the Department of Defense, the loosening of these restrictions is a “terrific thing,” but it remains to be seen how the changes will be implemented.

The Aleph Institute is one of three endorsing agencies for Jewish chaplains in the U.S. military. The Department of Defense “provides instructions, but the details are left to the individual departments,” such as the Navy or the Marines, Dresin told JNS.org.

Dresin explained that these military departments “have a certain degree of autonomy,” and that he hopes they “will not set any obstacles” for individuals who apply for permission to wear religious garments.

The Department of Defense decision conjures echoes of the case of Rabbi Menachem Stern, who was sworn in as a U.S. army chaplain in December 2011 following the resolution of his lawsuit against the army. The army had refused to budge for Stern on its “no-beard” policy for several years, but finally decided it wasn’t “going to take a chance with a lawsuit because they didn’t know what the judge could do,” Lewin—who represented Stern pro bono—said at the time. U.S. Sens. Charles Schumer (D-NY), Kirsten Gillibrand (D-NY), and former Senator Joseph Lieberman (I-CT) had all advocated for Stern’s cause.

Lewin won a similar case for Rabbi Michell Geller in 1976. But in the 1986 U.S. Supreme Court case Goldman v. Weinberger, an Orthodox rabbi represented by Lewin was told by the U.S. Air Force he could not wear a yarmulke indoors while he was in uniform and on duty at his base. The rabbi argued that this policy violated his freedom of religion, which is protected under the First Amendment. The Supreme Court, however, upheld the military’s policy in a 5-4 vote.

Justice William Rehnquist’s majority opinion in that case stated the military is a “specialized society separate from civilian society,” and that to “accomplish its mission the military must foster instinctive obedience, unity, commitment, and esprit de corps.” One of the ways the military achieves this is through requiring its members to wear uniform clothing.

Then came the passage of 10 USC 774 in 1996. Under that statute, Lewin said, the Department of Defense “is not authorized to institute a system under which prior approval has to be obtained to wear an item of religious apparel,” although the military can later prohibit a soldier if it deems that the religious clothing item or facial hair interferes with “the performance of the member’s military duties,” or if the item is determined to be “not neat or conservative.”

“If approval is denied, the applicant can go up the ladder within the military service to seek approval. If he or she goes directly to court, the service may claim that he or she has to exhaust internal military remedies, but I think there is a good argument if the applicant is denied the right to wear religious clothing (or a beard) while the process is ongoing that this is an infringement of a freedom-of-religion right that warrants immediate relief in a court,” said Lewin.

“The new policy doesn’t make any drastic changes, nor does it allow any items previously prohibited. However, it does clarify the process for granting religious accommodation, and potentially opens the door for observant Jews to serve and observe mitzvot with greater ease,” Jason Rubin, a spokesman for Jews in Green, told JNS.org.

Rubin added that the policy also includes loosened regulations on religious observances such as Shabbat and dietary considerations.

“Perhaps the most important thing about the update is that it shows the DoD’s recognition that religious observance is something that is important to our service members, and by making reasonable accommodations we can be a stronger and more effective force because of it,” he said.