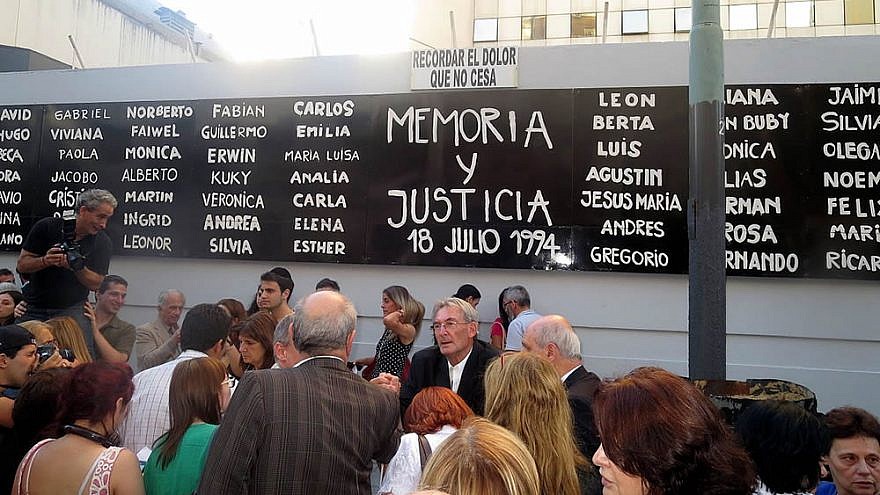 The front of the AMIA building in Buenos Aires, with the names of the 85 people who died in the July 18, 1994 bombing that also left more ta 300 injured, July 18 July 2015. Credit: Wikimedia Commons.
Spread the word.
Help JNS grow!
Share now:

(August 27, 2021 / JNS) A prosecutor in Argentina told Israel Hayom he will not stop trying to apprehend those responsible for the 1994 deadly bombing of the Jewish community center in Buenos Aires, following news that one of the alleged terrorists was named Iran’s new interior minister.

Former Quds Force commander Ahmad Vahidi was appointed to his new position earlier in August. He has been wanted by Interpol since 2007 over his alleged role in the July 18, 1994, bombing of the Mutual Israelite Association of Argentina (AMIA) Jewish center, which killed 85 people and wounded hundreds.

Argentina previously issued an extradition order against Vahidi, and prosecutor Sebastian Basso said on Thursday, “We are doing our utmost to bring the perpetrators to justice in Argentina. But there is not much we can do outside the borders of the state except to ask the executive authority to move forward on the matter.”

“The case is open, and the extradition orders are in force, and the prosecution is more interested in this person [Vahidi] standing trial in Argentina,” he added. “We continue to investigate the case. We are working, among other things, to identify all those who were involved in carrying out the attack. We are aware, however, that after 27 years, it is a rather difficult task.”

Basso said that Vahidi’s appointment as Iran’s next interior minister does not surprise him, but “what makes me sad is that we cannot bring Vahidi to Argentina.”

Basso has been leading extradition efforts since 2015. His predecessor, Alberto Nisman, was assassinated a day before he was scheduled to testify to an Argentine congressional panel about Argentina’s then-President Cristina Kirchner and her alleged cover-up of Iran’s role in the bombing. Kirchner is now Argentina’s vice president.