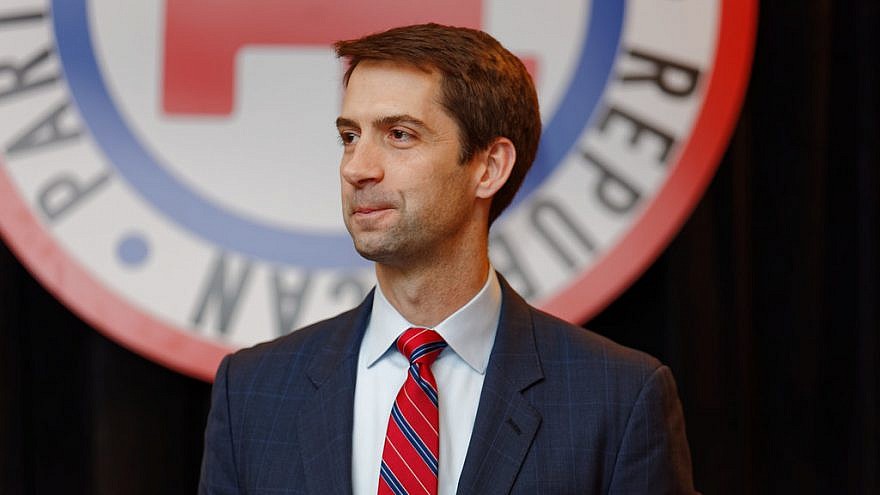 (July 30, 2021 / JNS) A group of Senate Republicans led by Sen. Tom Cotton (R-Ark.) introduced a bill on Thursday that would prevent the Biden administration’s State Department or U.S. Customs and Border Protection from rescinding late 2020 federal guidelines that allow goods produced in Judea and Samaria, also known as the West Bank, to be labeled “Made in Israel.”

If passed, the bill titled the Anti-BDS Labeling Act, would require that current laws regarding the marking of products with “Made in Israel” codified by executive order on Dec. 23, 2020, to be enforced and cannot be changed without an act of Congress.

In a news release supporting the bill, the senators said that the bill intends to fight back against efforts to delegitimize Israel through the Boycott, Divestment and Sanctions movement and to allow all products made in areas under Israel’s authority to proudly state “Made in Israel” on its label.

“Left-wing activists abuse county-of-origin labels in order to stigmatize products made in Israel,” Cotton said in a release. “Our bill will defend the integrity of the Jewish state by ensuring that Israeli products may proudly bear the label ‘Made in Israel.’”

“The anti-Semitic [BDS]movement is engaged in discriminatory economic warfare targeting the Jewish state of Israel. Last year, President [Donald] Trump dealt a serious blow to the BDS movement when he ended the U.S. government’s discriminatory treatment of Israeli goods produced in Judea and Samaria and required these imported goods to be labeled as ‘Made in Israel.’” Hagerty said in a release. “I’m proud to support Senator Cotton’s important legislation to counter efforts by the BDS movement and its anti-Israel supporters to pressure the Biden administration into reversing President Trump’s pro-Israel policy changes.”

According to Cotton’s release, the United States first began requiring products made in Judea and Samaria to bear the label “Made in the West Bank” in 1995 during the Clinton administration. The guidelines were again republished in 2016.

Trump’s executive order was lobbied for by Cotton in November 2020 in a letter sent to the president, shortly before the administration created the new guidelines.

“We must not allow the Biden administration to roll back existing policy and allow the singling out and discrimination against products made in Israel,” said Blackburn. “It is a double standard that is not applied to other sovereign nations involved in territorial disputes.”

Despite the bill’s introduction on the floor, it is unlikely to move any further due to Democratic Party control of the Senate and House of Representatives.