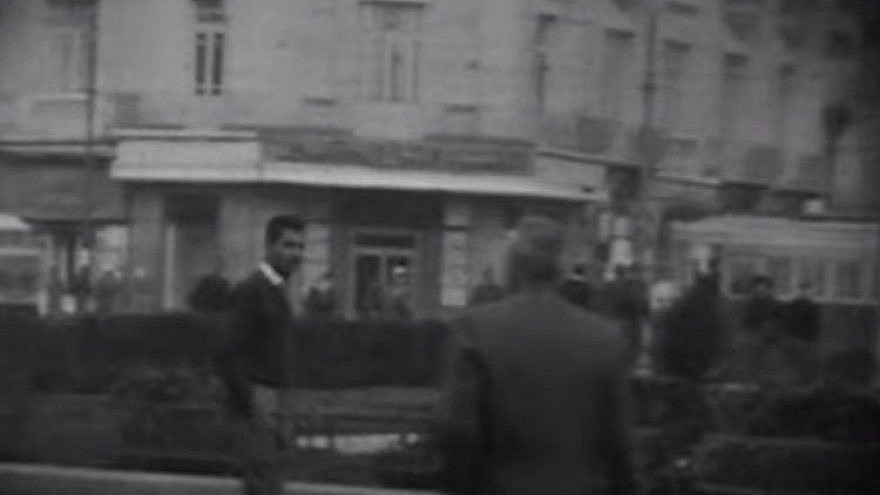 The broadcast came as Moscow was mediating efforts to return an Israeli woman who had crossed the border into Syria.

According to RT, the rare footage was discovered in film taken by a Russian military attaché in Damascus at the time. The half-hour clip includes a street brawl and images of police officers arresting drivers, as well as images of the bustling market in Damascus’ Old City. Alongside the tourist scenes, the film also allegedly contained snippets from a military base visited by the Russian attaché and of Eli Cohen walking through the streets of the Syrian capital.

It is unclear whether the Israeli spy was caught on camera by chance or if he was filmed on purpose. According to RT, the clip was filmed near Syrian Air Force headquarters, in the heart of the city’s government district, and the vicinity of Cohen’s apartment.

Cohen’s widow, Nadia, told Israel Hayom that she had watched the clip with excitement. “This is another reminder of my Eli,” she said.

She blasted Israel’s treatment of her husband and the fact that his remains are still in Syria—something that she finds particularly egregious following the return of the Israeli woman who had crossed the border into the enemy country two weeks ago.

She said that Israel was guilty of “an indescribable crime” for sending her husband into Syria despite knowing officials had become suspicious of him.

“When you sit here among your people, and you see them raise their children and grandchildren, and they look at me and my children—there is no change, no compassion. Let’s hear them; let’s hear what they have to say to each of us. It’s something indescribable from beginning to end.”

“The people are great. A prime minister and another one everyone knows is a murderer were involved in his murder. The nation’s embrace is what compensates us. They see his fame, his work before their eyes. Day by day, I gain sympathy for Eli. It doesn’t come from above but at eye level. It’s amazing, and there really are no words for it.”

Lambasting the government, Cohen said, “Nothing comes from the decision-makers. Our anger … after [late Mossad chief] Meir Dagan, we were like flies they batted away. Meir Dagan embraced us, but after that, we were done.”

Cohen had previously said that Dagan had contacted U.S. officials to help obtain Cohen’s remains in 2011, at the outset of the Syrian civil war.

She said that late Israeli Prime Minister Yitzhak Rabin, Shimon Peres and President Reuven Rivlin complained when they were called murderers, “but you murdered them,” she said. “They don’t like it. So what did they do? Did they not murder him? Did they not murder his children? Me? People like [German Chancellor Angela] Merkel, the pope, come. We give them a letter, and the letter gets crumpled up in their hand and doesn’t get passed on to anyone.”

Calling her husband “the people’s hero,” she said.”We will not be silent. We will continue to commemorate him. We will soon embark on a campaign to establish a museum in his memory. Just a week and a half ago, we built a private monument next to the Upper Custom House [in the Golan Heights]. There were a lot of graduates, generals. Everything comes from the people: the love, the embrace, the affection.”