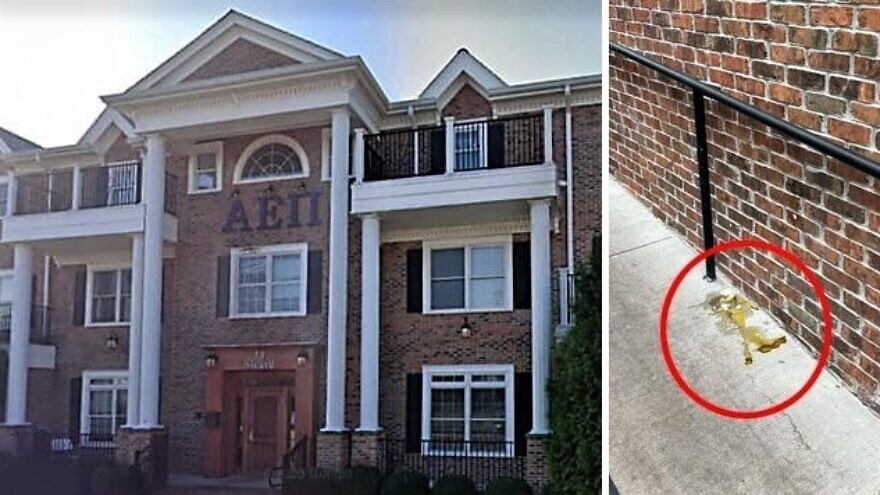 For the second year in a row, the AEPi fraternity house at Rutgers University was egged the night of Yom Hashoah, April 27, 2022. Source: StopAntisemitism.org.
Spread the word.
Help JNS grow!
Share now:

(April 28, 2022 / JNS) Rutgers University in New Brunswick, N.J., is beefing up patrols around a Jewish fraternity after a series of anti-Semitic incidents in recent days.

“The university received reports of harassment of Jewish students at the AEPi fraternity on [April 22]. The incident involved yet-to-be-identified individuals who appear to have targeted the Rutgers fraternity entirely because of the Jewish identity of its members,” said chancellor-provost Francine Conway. “Initial representations regarding the incident are disturbing. We understand and are sensitive to the concerns of those who were targeted and stand by our Jewish students, faculty and staff.”

StopAntisemitism.org released a video over the weekend that showed members of Students for Justice in Palestine sitting in cars outside of the AEPi fraternity house at Rutgers waving Palestinian flags.

According to the watchdog group, the protesters called the Jewish students “baby killers” and “terrorists.” A release from Hillel Rutgers said that some students were spat on.

Rutgers is home to one of the largest concentrations of Jewish students at a public university, according to Hillel International with some 6,400 Jewish undergraduates.

The anti-Semitic incidents continued on Monday night when members of the fraternity were gathered for their annual Holocaust remembrance program, “Unto Every Person There Is a Name.”

According to Rutgers Hillel, “eggs were discovered to have been thrown at the house while brothers were reading the names of Holocaust victims overnight in commemoration of Yom Hashoah. Sadly, this is the second year that eggs were found thrown at the house during this program.”

On Wednesday, the Anti-Defamation League, New York/New Jersey, tweeted: “Outraged at repeated targeting” of Rutgers AEPi, including during Yom Hashoah events. “We will continue to support students and partner with the administration to address and prevent these terrible actions from recurring.”

In response to the incidents, Rutgers said it will be increasing police patrols “in and around the building,” as well as providing “counseling and support to students who are experiencing trauma or other effects of these actions,” according to the school’s chancellor.

As for fraternity members, they are raising funds to “support Holocaust education, as well as Jewish Ukrainian refugees.”

“The brothers of AEPi want to show that we are not intimated by anti-Semitism,” they said in a post online, “and will use this as a way to raise money and awareness for Jewish causes alike.”