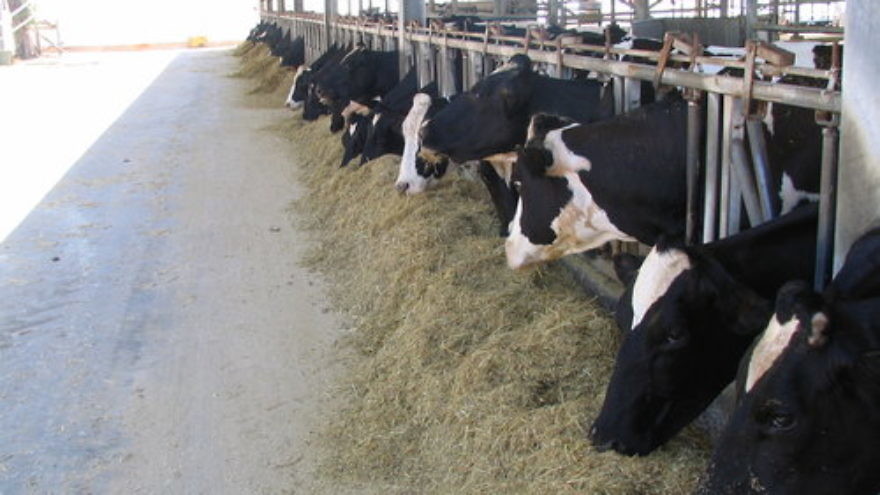 Amid all the buzz around Israel’s “start-up nation,” including Intel’s recent $15 billion acquisition of Mobileye, a lesser-known phenomenon is the high-tech and hyper-efficient Israeli dairy industry.

Surprised? Don’t be. The combination of Israelis’ high demand for dairy products and the Jewish state’s well-documented ingenuity makes the cutting-edge dairy industry a natural development in what the Bible describes as a “land flowing with milk and honey.” The demand for dairy in Israel is particularly high for Shavuot (marked May 30-June 1), when eating dairy is a holiday tradition.

The Israeli love for dairy

Michal Kraus, executive director of the Israeli Dairy Board, tells JNS.org Israelis prefer milk, yogurt, cottage cheese or soft cheeses during the warmer summer months because these dairy products are cooler and easier to digest. Hard cheeses tend to be consumed in foods such as toast and pizza, and more frequently during the winter months. Israeli supermarket shelves feature about 800 varieties of dairy products.

The latest trends in Israel’s dairy market involve “going back to basic, nostalgic products but also clean label [production]” and the “reduction of salt and sugar,” says Tzvika Dor, director of business development at the premium dairy plant Gad Dairy, whose production represents 5 percent of the Israeli dairy market.

The quota system and the ‘Herd Book’

Milk production in Israel is carried out under a quota system that exists in only two other nations—Canada and Norway.

“In case of an increase or expected increase in the demand for milk products, the Dairy Board lifts the quota…The Dairy Board advises the farmers, considering the expected high demand for holidays and summer months, allowing the farmers to plan and get organized accordingly,” says Dr. Ephraim Maltz, a senior researcher emeritus at the Volcani Center, the Israeli Ministry of Agriculture’s research arm.

Israel’s dairy sector functions in a unified manner because the country is relatively small, Kraus explains. All the industry’s players know at any given moment about virtually each individual cow, what its environment is and if it carries any germs. This information, she says, provides an advantage in the cultivation of herds—Israel uses artificial insemination to breed cows—and enables increased milk production.

More than 80 percent of the country’s cows are registered in the Israel Herd Book, a computerized database that allows tracing the genealogy, history, milk yield and other factors for each cow. Theses metrics “are monitored continuously for production health and reproduction,” Maltz says.

Israel’s Holstein cows—the nation’s specific breed of dairy cattle, which has adapted to a warm climate—produce about 3,000 gallons of milk per cow per year. This figure is “among the highest productions in the world, if not the highest,” says Maltz.

With the government’s support, Israeli farmers have learned to breed cows by better utilizing the natural environment, despite the nation’s arid climate and chronic water shortages. The farmers’ methods include feeding cows with recycled natural foods, using recycled water to grow fodder and reusing manure in agriculture. Several delegations from other countries have visited Israel to learn from these techniques.

Most Israeli dairy farms use electronic methods to detect a cow’s estrous cycle—the reproductive cycle of mammals such as cows—“by using individual cow activity as an indication for insemination time,” he says.

“It’s like placing a watch on a person’s hand and measuring blood pressure, body temperature or any other parameter you want to know,” Kraus says.

These sensors improve cows’ health and reproduction, and increase efficiency in the milking process. The monitoring and production technologies are managed by two Israeli companies, Afimilk and SCR, that are internationally known dairy industry pioneers who export their product all over the world, says Maltz.

More cutting-edge technology comes from Tnuva, Israel’s largest food manufacturer. Recently, the company began feeding some cows with a substance containing flax, which the company says improves both the cows’ health and their milk. Based on this technique, they rolled out a new brand of milk, “Chalav Hameshek,” which is rich in Omega-3 fatty acids.

Tnuva aims to expand the project—still in its early stages at a few dairy farms—so it will ultimately be implemented for all farms whose milk is delivered to the company, says its head scientist, Zeev Paikowsky.

Israel has experienced a notable growth in demand for dairy products since 2016, Kraus says. The demand for Shavuot can largely be met, she says, because the holiday “falls in a period of the year (roughly December to June) that in the Northern Hemisphere is the period when cows produce the most milk.”

One challenge, however, is milk plants might be closed for several consecutive days for holidays or Shabbat.

At Gad Dairy, being prepared for Shavout means increasing production as many as five or six months before the holiday, Dor says.

“The combination of high milk production [around the time of Shavuot], together with careful planning,” says Paikowsky, “enables [the company] to provide the full range of products before the holiday.”