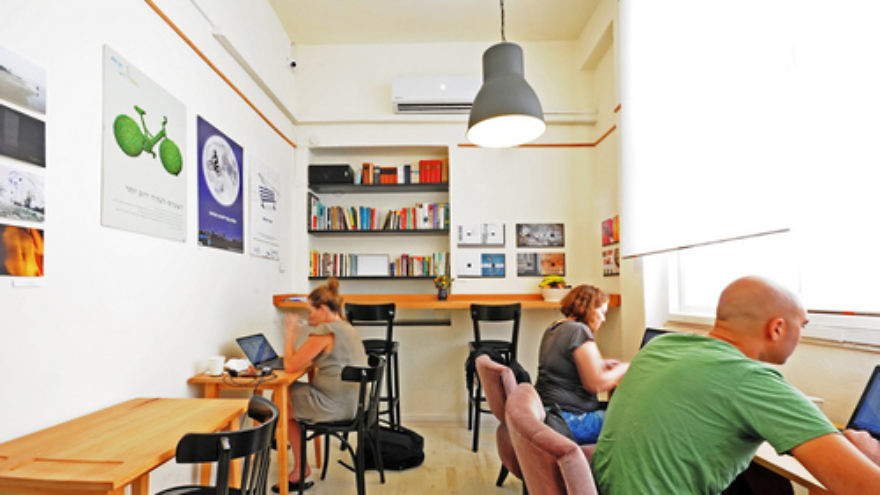 But the writing life is rarely lucrative. Israeli authors suffer diminishing returns from their work, and many feel trapped by an increasingly antiquated publishing model. Nevertheless, their continuing commitment to their craft and to storytelling—despite financial hardship—is prompting tremendous innovation, conversation, and experimentation within Israeli society.

Last month in Tel Aviv, Ido Angel—founder of the shared workspace Misanthrope and author of “Children’s Story,” a Hebrew novel about a troubled pregnant woman and her spouse—interrupts the silence in his establishment to offer a toast.

“Today we celebrate three years in business,” he quietly explains, distributing small paper cups of whiskey to a full house of patrons. There are modest cheers, then the silence resumes. Dailysecret.com has called Misanthrope an “antithesis to a café.” In return for a small hourly fee, customers enjoy unlimited free coffee, fresh fruit, WiFi, and a comfortable public quiet space to work on personal projects. This is where Angel is writing his next book.

The name Misanthrope may be a little extreme. Angel certainly doesn’t hate human society, but he intends the workspace to be used solely in the spirit of self-interest. “You can’t be committed to anything [while] in your underwear,” Angel tells JNS.org. “In order to write, I need the feeling that I’ve left the house. I need people around me, but I don’t necessarily need to talk to anyone.”

Angel has made the best of a difficult situation. “Being a writer in Israel is a nice hobby, but unless you’re the elite, like David Grossman or Meir Shalev, you can’t make a living at it,” Roni Gelbfish—author of “A Dirty Little Story,” a prize-winning Hebrew novel about a man who wonders if he is guilty of raping a young girl in his youth—tells JNS.org.

Misanthrope “provides a steadier income and allows [Angel] to spend most of the day writing,” Gelbfish explains. Other writers offer writing workshops, or work as editors and news reporters, to supplement their income from book royalties.

Ironically, the financial difficulty that Gelbfish and Angel describe is in part the result of an enormously successful bookselling initiative. In recent years, Steimatzky and Tzomet Sfarim—Israel’s dominant booksellers—began offering incredible discounts. These companies control the distribution of Hebrew literature in Israel through numerous chain stores. During the December warehouse-clearing sale, readers can purchase four books for as little as 100 shekels, or roughly $28.

Not surprisingly, readers love the deal, and Israelis stock up on a year’s reading. On the surface, this sounds like good news in a world where literacy is in decline. For the writers, however, the annual sale is disappointing. “My book was on sale almost from day one,” says Gelbfish. “The publishing houses are exploiting the writers. You get an advance, and then that’s it.”

A new law that takes effect in Israel beginning in February 2014 will regulate the book market and provide new incentives for writers. In addition to prohibiting the discounting of new books for the first 18 months following publication, the law provides tax breaks and prize money to support and encourage struggling authors.

Regardless of the new law’s good intentions, Gelbfish expects a rocky start. “Israelis may be addicted to cheap books,” she says. “It may take some time before they are willing to pay full price for anything.” Both Gelbfish and Angel see the real opportunity for authors lying outside the realm of print. “It’s obvious that in three to four years, everything will be digital,” Angel says. “So let’s have it already.”

“We don’t want a print market. This makes you need the booksellers. The digital market sets writers free,” Gelbfish says.

To a large extent, this has already taken place. Gelbfish demonstrated the vibrancy of the online reading community with a single post on Facebook. When she posed the question “Who is the best example of a non-conformist character in Israeli literature?” replies poured in, suggesting books, authors, characters, and scenes that ran the gamut of all Hebrew literature. Hardly a one-way dialogue, the writers and readers participating in the thread debated each other’s answers, advocated for their favorites, and explored their cultural heritage, all through modern social media.

Despite the mounting pressure to digitize, prize-winning Israeli author Eshkol Nevo—whose novel “Homesick” explores troubled homes and relationships—is taking everything in stride. “Every writer wants his creation to reach as many readers as possible,” Nevo tells JNS.org.

Nevo admits that, although he personally avoids social media tools such as Facebook and LinkedIn, they do sell books. But even in the future when “everything will likely be streaming,” the “basic act that readers value will still be storytelling,” he says.

Indeed, Israelis love a good novel. At the core of this communal passion for books lies the public’s need and desire to understand the ever-changing nature of what best-selling writer David Grossman calls “the situation:” a summary word for the so-called peace process and the intractable violence that plagues the region.

Grossman’s acclaimed novel, “To the End of the Land,” is a story that grew out of the author’s personal loss. Widely translated, the novel tracks a mother’s escape from civilization. Dreading news of her son’s final mission in the army, she and her lover trek across Israel’s Galilee trail. “I wanted to tell a story that asked, what does it mean to be a normal human being in an abnormal situation,” Grossman tells JNS.org. “I wanted to show how even though this small family tries to protect itself from the brutality of the situation, the reality of the conflict is so sharp.”

“‘Homesick’ hit a similar nerve,” Nevo observes. “Everyone is looking for a home here. This is unique to Israel. Ever since 1948 the borders are still not clear. One missile from Gaza and everybody checks their passports to make sure they have a way out. Israel is home, but existence is not assured. There is still a wandering Jew.”

Israel’s most talented writers skillfully chronicle these complex and deep-seated problems affecting their society. When a book gets the situation right, its influence is resounding. Unfortunately, the difficulty of procuring translations prohibits many Israeli writers from reaching an international audience. The lack of a U.S. readership for Israeli authors particularly disheartens Nevo. “Jewish Americans share a connection to Israel,” he says. “It’s such a pity that their readership is so unknowledgeable about our writers.”

In Israel, the digital revolution creates opportunity, but harsh social, political, and economic realities continue to isolate the country’s writers. To cope with this situation, many writers find comfort and direction in the very basis for their profession—the Hebrew language. Grossman seemingly regards his writing almost as though it is a secret, accessible only to Hebrew-speaking audiences.

“I have a feeling that my books really only exist in Hebrew,” he says.

But the key to Grossman’s success—the work ethic that is a fundamental trait of all aspiring authors—is no secret.

“I work whenever I am in the moment,” he says. “Then there is a passionate desire to tell a good story.”

Part of the JNS.org special section on Jewish books.