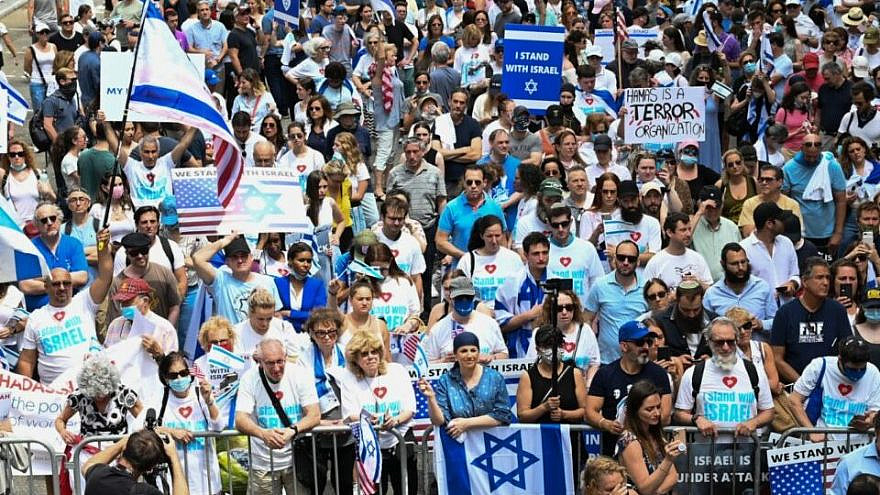 (May 24, 2021 / Israel Hayom) Thousands gathered on Sunday for a pro-Israel rally in New York in response to a series of antisemitic attacks on Israeli and Jewish American communities in the United States in the wake of Israel’s “Operation Guardian of the Walls” in the Gaza Strip.

The demonstration, “United Against Antisemitism. United Against Terror. United for Us,” took place at Ground Zero and in 14 other cities across the United States, among them Miami, Los Angeles, Orlando, Austin, Denver, Houston and more. It was organized by the Israeli-American Council together with 100 other Jewish community organizations.

IAC co-founder and CEO Shoham Nicolet said “we have chosen the World Trade Center site in New York because it is a symbol of the American nation’s resilience against terrorism and hatred. Throughout the United States and in front of the whole world, we have shown how united we are against terrorism and anti-Semitism here and in Israel.”

Elisha Wiesel, son of Holocaust survivor and Nobel Peace Prize laureate Elie Wiesel; Sarri Ringer, who was wounded in the Davidka Square bus bombing in Jerusalem in 2003; and Ross Todmowski, who lost his sister in the 9/11 terrorist attacks, all spoke at the rally.

In his speech, Wiesel referred to his father’s book The Jews of Silence and said, “Once again, too many of us have become Jews of silence. We have fought for every cause except for ourselves. Today is the day we remove the silence and say out loud—we are here, we are not going anywhere.”