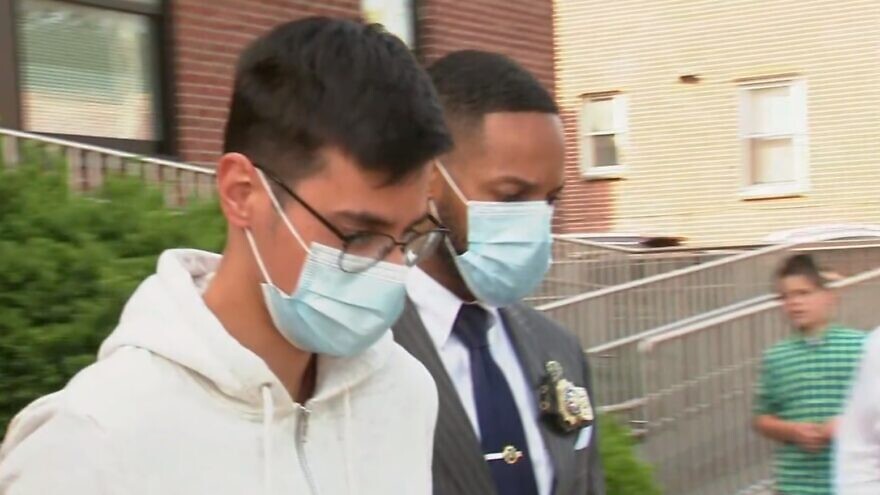 Three men from Brooklyn, N.Y., have been charged in relation to two hate-crime incidents in May 2021 that targeted religious Jews. Source: Screenshot.
Spread the word.
Help JNS grow!
Share now:

(July 23, 2021 / JNS) Three men in Brooklyn, N.Y., have been charged in relation to two hate-crime incidents that targeted religious Jews.

According to a police investigation, the defendants stopped their blue Toyota Camry outside a synagogue in Borough Park on May 22 and yelled “Free Palestine, kill all the Jews!” Shaukat and Anjam then allegedly left the car and approached two Jewish men who were dressed in religious attire. They repeated the same anti-Semitic statements before banging on the synagogue door, as children and adults hid inside. Anjam also allegedly kicked the side mirror of a nearby parked car.

Later that day, the trio stopped two other Jewish men who were walking home from a synagogue in the Kensington neighborhood of Brooklyn. Anjam and Shaukat again exited the Toyota, approached the two victims and demanded repeatedly that they say “Free Palestine.” They allegedly punched one of the victims several times and put him in a chokehold, and Azad punched one of the victims in the head.

Anjam also chased the victims with a wooden cricket bat as they ran away. A Lyft driver who saw the incident unfold offered the victims assistance and drove them away to safety, according to the investigation.

Anjam was arraigned last week, Shaukat was arraigned on Monday, and Azad will be arraigned at a later date, reported the Brooklyn Daily Eagle. They were released on $4,000 to $5,000 bonds and must return to court on Sept. 9. If convicted, they face a maximum sentence of one to to four years in prison.