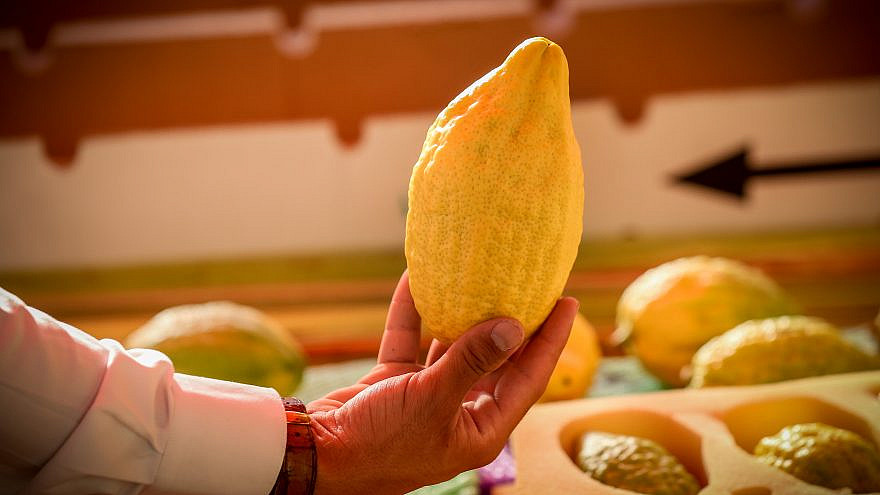 The “etrog” (citron), one of the “Four Species” or “Four Kinds,” on sale at a market in the northern Israeli city of Tzfat, ahead of the holiday of Sukkot, Oct. 10, 2019. Photo by David Cohen/Flash90.
Spread the word.
Help JNS grow!
Share now:

(September 20, 2021 / JNS) The United Arab Emirates helped coordinate the delivery of around 500 citrons, known as etrogim in Hebrew, and packages of myrtle to Iran’s Jewish community to be used for Sukkot, reported The Jerusalem Post.

Citrons and myrtle, called in Hebrew hadas, are two of the “Four Species” traditionally used during prayers over the Sukkot holiday, which begins this year at sundown on Sept. 20 and lasts through sundown on Monday, Sept. 27, followed by Simchat Torah on Sept. 28.

“Jews have been practicing Judaism across the Muslim world for thousands of years,” said Rabbi Mendy Chitrik, chairman of the UAE’s Alliance of Rabbis in the Islamic States, which coordinated the deliveries to Iran. “It is just natural for Jews in Muslim countries to help each other facilitate holiday needs to enable other Jews to carry out their religious obligations.”

Both citron and myrtle do not grow in Iran. In past years, the Iranian Jewish community imported citrons through Turkey, but organizing delivery from the country has been challenging in recent weeks due to Turkey’s rise in coronavirus cases.

Iran’s community has been successful in locally sourcing the other two species used during Sukkot: palm fronds (lulav) and willow branches (arava).