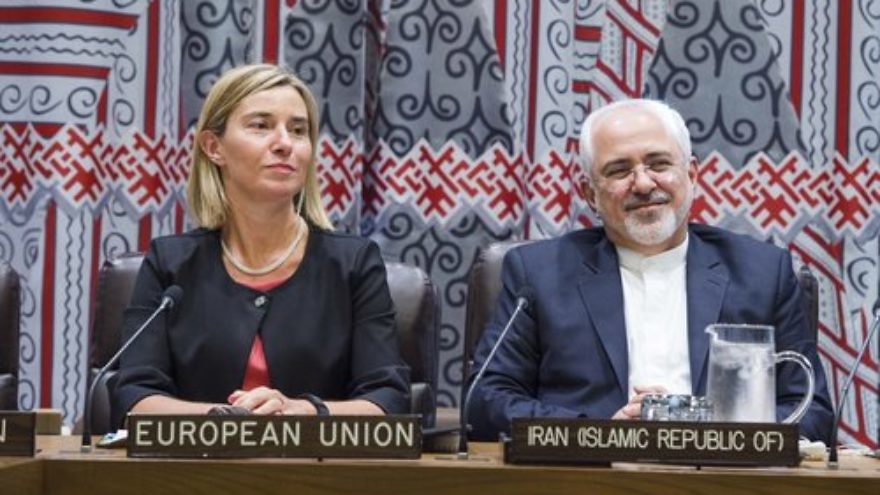 Iran is unlikely to halt its drive towards nuclear weapons and ballistic missiles in the aftermath of President Donald Trump’s recent refusal to recertify the Islamic Republic’s compliance with the 2015 nuclear agreement, experts say.

Trump’s move empowers Congress to decide whether to reimpose sanctions that were lifted as part of the deal between Iran and world powers. The Iranian leadership has made aggressive statements in response to the announcement of America’s new and tougher approach, with the Islamic Revolutionary Guard Corps saying Thursday it would accelerate its ballistic missile program despite increased U.S. pressure, the semi-official Tasnim News Agency reported.

“Iran just keeps threatening to do what it’s already been doing—continuing its path to nuclear weapons,” Emily Landau, director of the Arms Control and Regional Security Program at Tel Aviv University’s Institute for National Security Studies (INSS), told JNS.org. “The most it changes is the pace of progress and that’s precisely the problem with the JCPOA (the nuclear deal’s formal name): it doesn’t stop Iran.”

Raz Zimmt—an Iran expert at two Israeli think tanks, INSS and the Forum for Regional Thinking—echoed this sentiment, saying, “Under no circumstances would Iran change the [nuclear] deal.”

How will the nuclear deal unfold?

The first option is that the status quo continues, with no new sanctions enacted by the U.S. or the European Union (EU). Iran would continue building its economic ties with Europe, explained Zimmt, but with more difficulties due to the threat of possible new U.S. sanctions hanging over business deals, potentially scaring away EU businesses.

The second scenario would involve the U.S. unilaterally reimposing sanctions. The Europeans would oppose this, and most businesses on the continent would not want to risk their connections to the U.S. over Iran policy, said Zimmt.

“If this were to happen, the Iranians might completely withdraw from the deal, or at least take some actions in violation of the deal,” he said.

The third possibility would be a total collapse of the nuclear deal.

The most likely scenario, Zimmt said, is the second option—which would mean the U.S. unilaterally imposes sanctions, but Iran would continue to do some business with the EU and therefore would not want to withdraw from the nuclear deal.

“The U.S. president showed by his remarks again that the U.S. government is not trustworthy and the U.S. behavior towards the nuclear deal persuades views of countries like North Korea,” Boroujerdi said during a meeting with his Turkish counterpart Yousef Bayazid in Tehran, the Fars News Agency reported.

Iranian Foreign Minister Mohammad Javad Zarif has argued that by threatening to withdraw from the Iran nuclear deal or seeking to alter the accord, the Trump administration would discourage other countries such as North Korea from reaching long-term agreements with the U.S.

Yet Landau said, “The argument that North Korea would not want to negotiate with the U.S. now that they see America wavering on Iran is completely bogus.”

“North Korea has not wanted to negotiate on its nuclear program for almost 10 years now, and let’s not forget how former President [Barack] Obama waited eight years for them to come to the table,” she said.

According to Landau, the U.S. is signaling it does not intend to leave the deal for now, but rather, it wants to strengthen the agreement and restore American deterrence vis-à-vis Iran.

Zimmt commented, “The most dangerous path Iran could take if put under more pressure would be to follow the North Korean model,” adding Iran could “seek to renegotiate after it achieved nuclear weapons [capability].”

The immediate threat to Israel

While top Israeli leaders have long argued Iran’s nuclear program is the most dangerous threat Israel faces, what constitutes arguably a more immediate concern is Tehran’s encroachment on the Jewish state’s northern border. Through proxies such as the Lebanese terror group Hezbollah, which together with Iran is supporting President Bashar al-Assad’s regime in the Syrian Civil War, Iran is striving to establish a land corridor from Tehran to Beirut, reaching Israel’s doorstep.