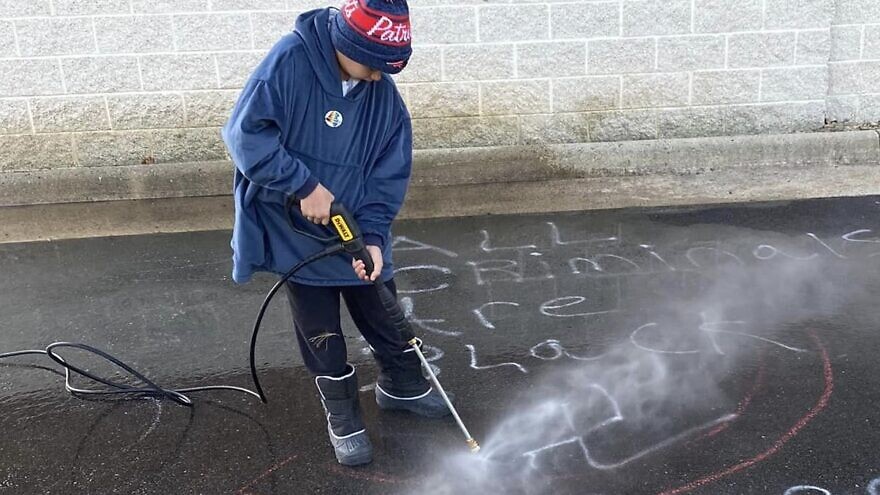 Residents of Loudoun County clean up antisemitic and racist messages that were spray-painted in the South Riding area of the county. Credit: Facebook.
Spread the word.
Help JNS grow!
Share now:

(December 5, 2022 / JNS) Residents of Loudoun County, Virginia, rallied against hateful and racist graffiti that was found near the Food Lion grocery store in the South Riding Town Center on Friday. Dozens of local residents participated in the rally, which took place near where the graffiti was found, along the Tall Cedars Parkway.

“We are showing up to let South Riding know we won’t tolerate this and show support for our diverse, inclusive community,” said a statement from the Facebook event, which was organized by the group Loudon4All.

The graffiti was removed due to the help of community members and Timbers Landscaping Care LLC. The company described the move as “erasing hate” in a Facebook post.

“Thank you to our wonderful community for showing solidarity & coming out to show support!” the company wrote. “Great to see local government officials as well as local families standing against racism.”

Gil Preuss, CEO of The Jewish Federation of Greater Washington, said his organization was “deeply disturbed” by the discovery of the graffiti—which included swastikas as well as offensive language directed at Black, Hispanic, Asian, LGBTQ+ and Jewish people, as well as the white supremacist symbol 1488.

“The use of the symbol ‘1488’ in particular indicates the perpetrator’s endorsement of white supremacy and its beliefs,” Preuss stated. “As we experience an uptick in antisemitism and hate in popular culture, we encourage our community to continue to speak out to show that hate has no place here.”