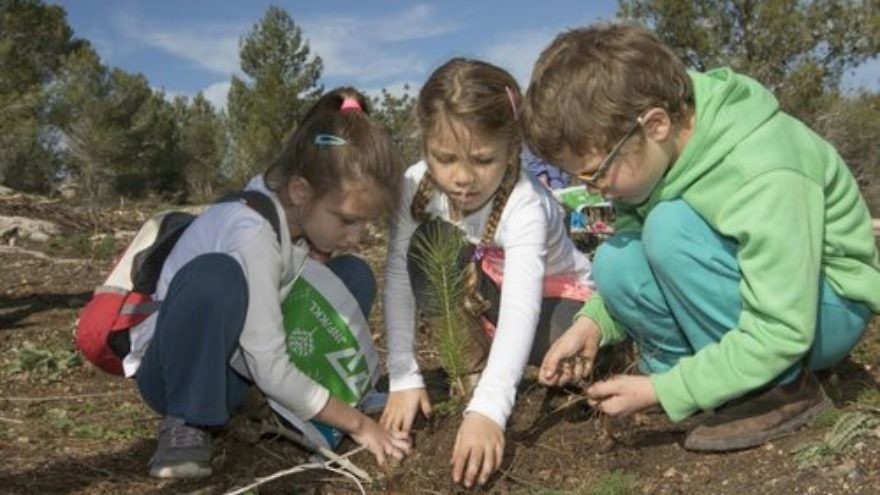 The Midrash in Kohelet Rabbah teaches that God told man He created everything for him. “Be careful not to spoil or destroy my world—for if you do, there will be nobody after you to repair it,” God said.

For more than a century, Keren Kayemet LeIsrael-Jewish National Fund (KKL-JNF), which calls itself “Israel’s largest environmental organization,” has followed that tenet by protecting and preserving nature in the Jewish state. The organization marked the 115th anniversary of its establishment Jan. 17, and also launched a monthlong nationwide campaign of planting events to commemorate the upcoming holiday of Tu B’Shvat.

Through Feb. 17, more than half a million people are expected to participate in more than 130 Tu B’Shvat-themed KKL-JNF planting events across Israel.

“What KKL-JNF is doing is something extraordinary. In essence, we make planting accessible to the wider public,” Hagay Yavlovich, the director of the organization’s Seeds and Nurseries Division, told JNS.org.

Yavlovich explained that the organization is using Tu B’Shvat to invite people to participate in planting to strengthen their connection to the forest, help them relate to the delicate ecosystem of the Jewish state, and teach them about the importance of preserving the environment. Those who plant a tree “will then treat the forest differently,” said Yavlovich.

The traditional roots of Tu B’Shvat

In Jewish tradition, Tu B’Shvat, also known as the New Year for trees, appears in the Rosh Hashanah section of the Mishnah relating to the fruit tithes that ancient Israelites needed to bring to the Temple in Jerusalem. It was a necessary step to determine the beginning and end of the crop year; any fruit that blossomed after Tu B’Shvat was considered produce from a new year.

Thus, Tu B’Shvat (marked Feb. 11 this year) was not originally related to planting new trees. In 1890, Rabbi Ze’ev Yavetz, a school teacher in Zichron Yaakov, took his students to plant trees on Tu B’Shvat. The Fifth Zionist Congress in Basel, Switzerland, later established KKL-JNF in 1901, to purchase plots of land as a foundation for a future Jewish state. The organization purchased its first acres in the land of Israel in 1904, and later began a decade-long process of forestation across a landscape that had been largely stripped bare by its inhabitants at that time.

Over time, “Israeli culture adopted tree planting as a tradition” and later as part of the celebration of Tu B’Shvat, and “KKL-JNF followed suit,” Yavlovich said.

The first forest the organization planted in Israel was the Hulda forest in the central part of the country, with 18 olive trees planted there in 1907. The largest forest it planted in the Jewish state is southern Israel’s Yatir Forest, which spans 9,400 acres.

Today, the group continues to argue that forestation is an important way to offset pollution and the effects of climate change. Its statistics also say that its forests offset half a million tons of greenhouse gases each year. Israel currently has 247,000 acres of man-planted forest—equivalent to approximately one-third of the size of Rhode Island. By contrast, when the organization was established in 1901, less than 2 percent of that area was woodland. As a result, Israel is one of the world’s few countries where there are more trees today than a century ago.

The aftermath of November’s wave of fires

Tu B’Shvat planting events are taking place in areas that have been specifically approved for that purpose. Meanwhile, other areas are still suffering from last fall’s devastating wave of brush fires.

Dr. David Brand, chief forester and head of the Forest Department for KKL-JNF, told JNS.org the fires destroyed or damaged about 16,000 dunams (about 4,000 acres) of woodlands managed by the organization.

In the fires’ aftermath, the immediate goal of the agency and others, such as the Israel Nature and Parks Authority (INPA), has been to remove safety hazards like fallen trees. Beyond this, it’s common practice to wait one or two years before engaging in further activity in the affected areas to see where natural regeneration occurs and assess other conditions before deciding whether to replant.

“If natural vegetation provides the necessary [plant] output, we will not interfere,” Brand said.

In state-run nature preserves, the INPA has been building gaps in vegetation—known as fuel breaks—along roads, villages and inside territories. This method aims to stop fire damage from spreading, said Dr. Yehoshua Shkedy, chief scientist at the INPA.

“We [also] bring sheep and goat grazing to nature preserves to reduce the vegetation,”  Shkedy said. “Then we are able to do good maintenance of the fuel breaks.”

To plant or not to plant

Over the years, the KKL-JNF organization—not just the Tu B’Shvat holiday—has become synonymous with the planting of pine trees in Israel. The pine tree is a coniferous species not native to Israel, but was chosen in the group’s early days for the tree’s ability to thrive in harsh terrains. Today, man-planted pine trees grow all across Israel, along with the country’s natural vegetation.

“[In many of] the places where we planted pine trees, slowly the natural vegetation has been able to rejuvenate,” Brand said.

“It’s a fact. Look how many fires there are,” he said, adding that Israel does not “need to plant so many trees.”

While it is acceptable to plant for purposes such as sun protection in urban areas, Shkedy recommended not planting in such an “expansive” way.

KKL-JNF’s Brand takes issue with Shkedy’s viewpoint. Since pine trees are a coniferous species, he pointed out that among the roughly 4,000 acres of the agency’s territory destroyed or damaged by November’s fires, only 50 percent was man-planted coniferous or mixed coniferous forest, and the other 50 percent was natural woodlands, bushes, shrubs, various broad leaf tress and open areas. He also said other factors can affect the spread of fire, such as the harsh conditions of dry weather and strong winds that existed in November.

Acknowledging the possibility of more fires and the need to be prepared for them, Brand said, “You won’t stop driving a car just because there is a risk of car accidents.”

Currently the organization has three nurseries for forest and woodland trees, bushes and spices, which grow about 1 million tree seedlings a year. Its tree policy has evolved over the years as a result of changes in the local terrain. Eighty percent of the growth in the organization’s tree nurseries today comprises broad leaf trees such as oak, almond or olive trees, and only 20 percent are pine seedlings. Thirty years ago, those figures were reversed.

Along with this reduction in pine tree planting, KKL-JNF still believes it is important to continue broader tree planting, because its leaders view the ecological contribution of trees and forests to the environment as substantially greater than the risk of fires. And they plan to plant more than half a million seedlings this year.