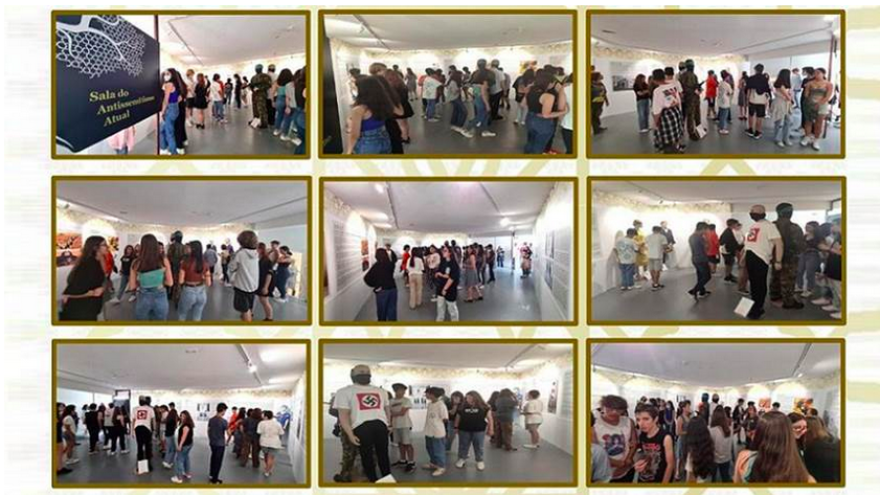 The new hall at the Jewish Museum of Oporto which presents the chronology of anti-Semitism in Portugal from 2015-2022.
Spread the word.
Help JNS grow!
Share now:

A new hall at the Jewish Museum of Oporto presents the chronology of anti-Semitism in Portugal from 2015-2022. It also displays statues representing modern anti-Semites, incorporating their ideas, publications and other forms of expression.

The exhibition begins with a study by the Anti-Defamation League in 2014, which concluded that there were at least 1.8 million people in Portuguese with anti-Semitic feelings.

However, at that time there were no anti-Semitic offenses in the country because nothing justified them: The national Jewish community, then numbering some 600 people, was pratically invisible.

Yet as a result of the 2015 Portuguese legislation promoting the return of Sephardic Jews, the Jewish community grew significantly. This was immediately followed by exponential growth in anti-Semitism.

To begin with, there were a number of negative posts online and malicious shares which were highly aggressive against “the Jews” as a religious and social group—such as, “It’s the worst race on Earth,” “they are foreigners,” “they wish to divide the Portuguese,” “go to Israel!”

The Oporto Jewish community created an Anti-Semitism Observatory to observe and monitor anti-Semitism on Portuguese territory in real-time, choose ways to reduce or eliminate the prejudice against Jews and Jewish communities, draw up scientific opinions and reports for information and action, if necessary, by the relevant supervisory authorities, and raise political parties’ awareness of the need to improve the existing legislation and promote suitable school curricula.

The community inaugurated the Jewish Museum of Oporto to create the image of an open religious community. However, the Public Security Police (PSP) was opposed to placing any police officer at the museum, for in their opinion there were no security risks. For security reasons, the Jewish community of Oporto decided not to open the Jewish museum to the general public. It serves exclusively the Portuguese and international Jewish community, schools and teachers.

A group belonging to the German antifascist “Anti Faschistishche Aktion” pasted their organization’s stickers on the Oporto synagogue, linking it to fascism. The group is also suspected of preparing to vandalize the Holocaust museum in this city. Indeed, some of its members were identified inside the museum the day before the action against the synagogue.

The construction of the Chabad Centre in Cascais and of the Jewish Museum of Alfama in Lisbon were opposed by some outspoken residents. It was claimed that the new buildings would break with the tradition of the neighborhoods. In the meantime, in Oporto there were many individual cases of antisemitism, fortunately without physical violence. The façade of a Jewish family’s home was vandalised in red paint, including the mezuzah. The head of that family had complained at his daughter’s school that a young boy had complained because “the Jews are killing children in Palestine.”

The state neither prevents nor punishes the spread of such stereotypes which in the past led to the genocide of the world Jewish population and in the present jeopardizes the respectability and security of Jews in general and Jewish communities, that in addition have to provide and pay for the protection of members, properties, synagogues, museums and cemeteries.

In 2020, a group of influential people in Portugal tried to put an end to the provisions of the Nationality Law for Portuguese Sephardic Jews by means of a defamation campaign against the Jewish communities involved in the certification process. Without being able to single out one wrongly decided case and ignoring all the positive effects of the law, these people spread hate on social media, using their journalist friends, media agents, columnists and professional slanderers to launch the worst stereotypes against the Jewish communities.

In 2022, people within the Portuguese state apparatus used journalists, influencers, anonymous accusers, anonymous sources and police to end the Sephardic law and bring down the leaders of the Jewish community of Oporto, the strongest in Portugal.

No one has escaped this kind of inquisition-style “purification.” From religious to secular leaders—presidents, ex-presidents, vice-presidents, treasurers, members and secretaries, not forgetting the museologist and the doorkeeper—and many more the victims, books of minutes were seized, as were confidential documents and communications between the Jewish community of Oporto and hundreds of Jewish organizations.

The new room presents an explanation of the genesis of the present criminal proceedings and soon there will also be a brightly lit display case containing all the accusations that led to these proceedings and photographs of all the characters who made, spread and took advantage of these charges for malign purposes.

The Jewish Museum of Oporto was inaugurated in 2019. In his address at the museum’s opening ceremony, the President of B’nai B’rith International said: “This Jewish Museum will punctuate the awakening of Jewish life in Portugal and should serve as a beacon of light for the rest of Europe, a land now obscured by resurgent antisemitism.”

Republish this article
About The Publishers
Portuguese Jewish News
The Portuguese Jewish News is a newspaper of the Jewish community for the Jewish community, sharing news, reportage, opinions and reviews regarding the Jewish community in Portugal, Europe and the world. Given Jewish history in Europe and the rise of antisemitism in its many forms, Jewish institutions, persons and communities must not be unnecessarily, dangerously or discourteously exposed on the internet. The project is operated on a voluntary basis, with no effective beneficiaries, independent of political and economic power, fully respecting the legislation applicable.
Publish your organization's press release on JNS Wire
Releases published on the JNS Wire are communicated and paid for by third parties. Jewish News Syndicate, and any of its distribution partners, take zero responsibility for the accuracy of any content published in any press release. All the statements, opinions, figures in text or multimedia including photos or videos included in each release are presented solely by the sponsoring organization, and in no way reflect the views or recommendation of Jewish News Syndicate or any of its partners. If you believe any of the content in a release published on JNS Wire is offensive or abusive, please report a release.
Never miss a thing
Get the best stories faster with JNS breaking news updates