(May 5, 2021, Khirbet Khurkosh – near Ariel, JNS Wire) Over the past several months Regavim has documented a persistent stream of incursion and annexation, as residents of Burkin, a village located in the area under Palestinian Authority jurisdiction, have taken over a significant parcel of land in the Ariel Commercial Zone – located in Area C, under full Israeli jurisdiction.

The area that is being quietly annexed is adjacent to an archaeological site known as Khirbet Khurkosh, where a magnificent Hellenistic Era mausoleum was discovered, along with other remains dating from the Iron Age through the Middle Ages. 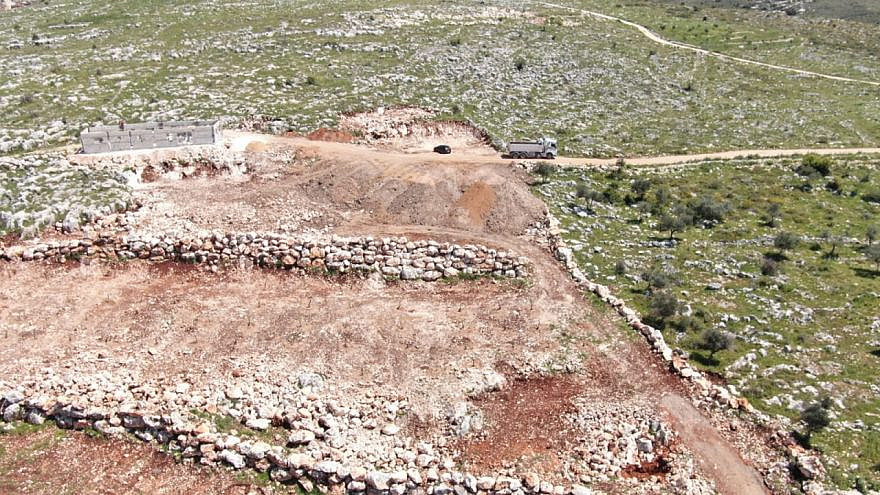 The PA is erasing Khirbet Khurkosh

This gradual annexation began with road work, which was soon followed by land clearing and preparation for agricultural work. Mature olive trees were quickly planted, in an attempt to make the newly-cleared area look “old” – and now, a large structure, already connected to electricity infrastructure despite its considerable distance from the village, is nearing completion. This entire project is unfolding on “survey land,” Israeli state land for which full registration has not been completed. 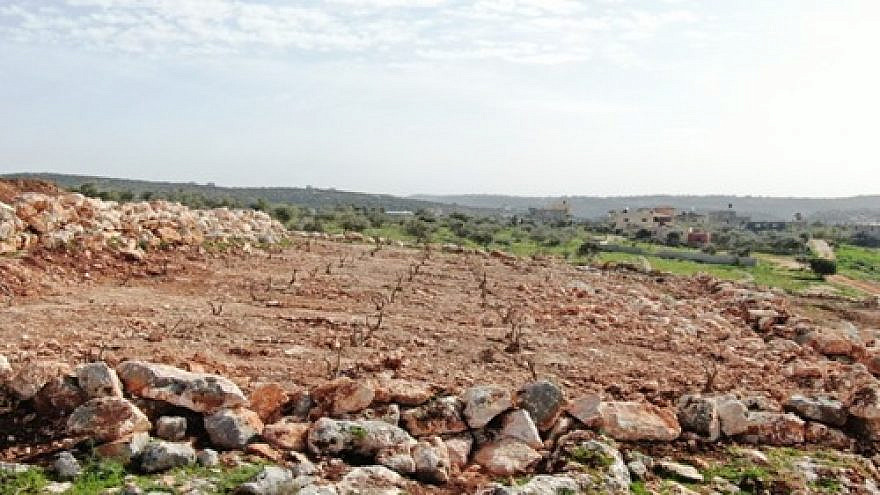 The recently-filed High Court petition emphasizes that six different requests for enforcement were submitted to the relevant authorities at each of the stages of the annexation process, but the work continued, unhindered, and no discernable enforcement has been carried out. 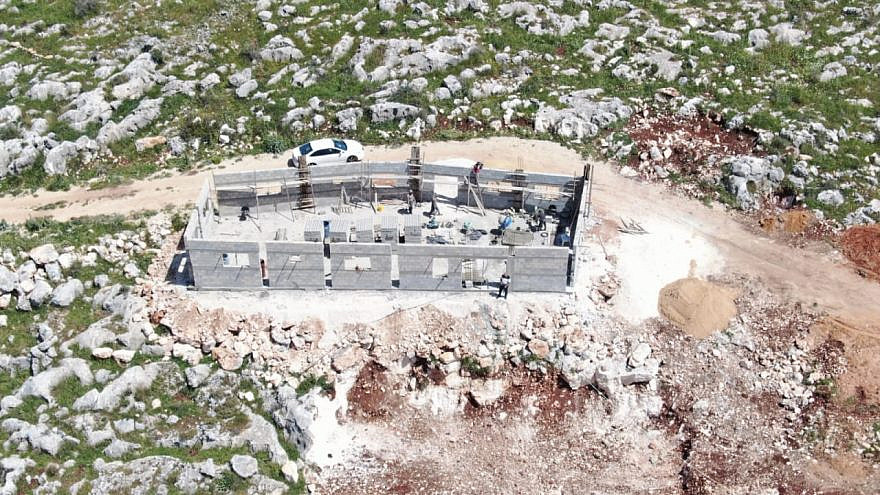 Illegal structure, built on an archaeological site, in the early stages of construction

For years, the Palestinian Authority and its partners in the European Union have exploited the Israeli bureaucratic and legal systems, successfully preventing law enforcement against illegal Palestinian annexation.

In 2018, the “Order for the Removal of New Illegal Structures” was enacted by the defense establishment and the State Attorney’s Office as part of the “Battle for Area C.” This legislation allows the demolition of new structures built without a permit within six months of construction. The order may be implemented within 96 hours of issuance of an eviction order.

The “Removal of New Structures” order is an effective enforcement tool that makes it possible to streamline the law enforcement process and make it more difficult for offenders to establish facts on the ground by abusing the judicial process.

After the “Removal of New Structures” order was enacted, left-wing organizations petitioned the High Court of Justice to strike it down, but their petition was rejected and the High Court approved the order’s use. Nonetheless, to this day the state has made minimal use of this order, despite the fact that it has proven to be the most efficient and effective tool in the fight against illegal construction.

In the petition filed by Regavim Movement and the Samaria Regional Council, attorneys Avi Segal and Yael Cinnamon requested that the High Court order the authorities to apply the “Order for Removal of New Structures” against the ongoing invasion of Khirbet Khurkosh.

Samaria Council Chairman Yossi Dagan said: “The Security Cabinet announced its intention to battle the PA’s annexation of Area C, and the time has come for the enforcement authorities to act accordingly – to approach the problem in a systematic fashion and to act systematically. We must stop the Palestinian Authority’s rampage, and tell them, loudly and clearly, who’s the boss.”

The joint petition stresses that “this case illustrates the PA’s systematic, well-financed and carefully-planned takeover of Area C, which seeks to shift the focal point of Palestinian  development from Area B to Area C. The Palestinian Authority is establishing facts on the ground in order to tie Israel’s hands – both in terms of current security considerations and in terms of political leverage in strategic points in Area C. These one-sided facts on the ground will impact the opening positions for future negotiations, and the State of Israel must address them right now.”

Regavim
Regavim is an Israeli non-profit movement dedicated to the preservation of Israel's national resources.
Publish your organization's press release on JNS Wire
Releases published on the JNS Wire are communicated and paid for by third parties. Jewish News Syndicate, and any of its distribution partners, take zero responsibility for the accuracy of any content published in any press release. All the statements, opinions, figures in text or multimedia including photos or videos included in each release are presented solely by the sponsoring organization, and in no way reflect the views or recommendation of Jewish News Syndicate or any of its partners. If you believe any of the content in a release published on JNS Wire is offensive or abusive, please report a release.