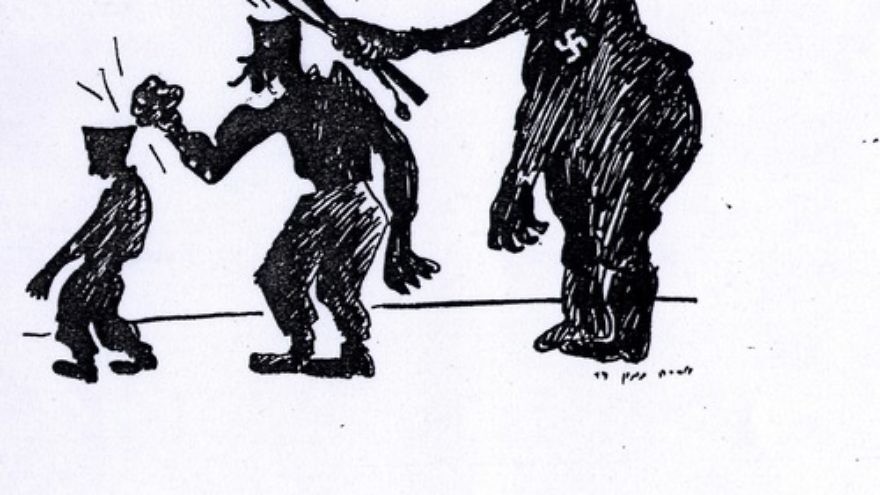 Jewish Palestine's most famous editorial cartoonist, Arie Navon of the newspaper Davar, drew this cartoon linking the Polish army situation to the Passover song "Had Gadya." The lyrics feature a cumulative series of larger animals chasing or eating smaller ones. In the cartoon, a Nazi beats a Polish officer, who then beats a Jewish soldier. Credit: Courtesy of The David S. Wyman Institute for Holocaust Studies.
Republish this article
929 WORDS
Spread the word.
Help JNS grow!
Share now:

(February 13, 2014 / JNS) A faded black-and-white photograph from 1943 shows Private Max Wald enjoying the Passover seder together with hundreds of his Polish army comrades.

But a tattered diary entry from the following year describes the “dampness and cold” of the prison cell where Wald spent Seder night in 1944, after he and hundreds of other Polish Jewish soldiers deserted en masse because of rampant anti-Semitism in the Polish army.

The photo and the diary provide bookends to a troubling and little-known chapter in Polish-Jewish relations during the Holocaust.

After the Germans overran Poland, many units of the Polish armed forces, known as the Polish Home Army, were based in Great Britain. Later, a second Polish force, under the command of General Wladyslaw Anders, was created in the Soviet Union, consisting of Polish ex-prisoners of war.

Jewish soldiers in the Polish forces often encountered anti-Semitic prejudice. Dan Adler of New York City, whose father, Kazimierz (Ron) Adler, served under Anders, told JNS.org that “the Polish soldiers in my father’s unit often made remarks accusing Jews of being cowards or weaklings.” They even had a saying in which a soldier confirmed he was holding something tightly by comparing it to strangling a Jew. The elder Adler recalled at least one instance in which he got into a fistfight with a fellow soldier who had made an anti-Jewish remark.

Adler emphasized, however, that these were the attitudes among ordinary soldiers, not among the army’s top brass, and official policy was non-discriminatory. Thus, when the army transferred to the Middle East, it arranged for Ron Adler’s parents and brother to be transported to Palestine. There, as the family of a Polish soldier, they received ongoing assistance from the Polish Consulate in Tel Aviv.

There were also frequent reports of anti-Semitic incidents among Polish forces in Scotland. (They were stationed there because of fears of a German invasion of Britain via nearby Norway.) In January 1943, an investigation by the Polish Ministry of Information confirmed that anti-Semitic leaflets had been distributed among Polish officers and soldiers stationed there. A local organization, the Glasgow Jewish Council, carried out an inquiry of its own and concluded that anti-Semitism was “rife” in the Polish army.

According to Private Max Wald, the problem of anti-Semitism in the Polish forces increased significantly in 1943 with the induction of ethnic Poles who had served in the German army and then were captured by the Allies. “They would say things to us like ‘Hitler will solve our Jewish problem for us,’ and ‘Every Pole has two bullets—the first for a Jew and the second for a German,’” Wald told his son, Professor James Wald of Massachusetts-based Hampshire College.

According to some accounts, these former German soldiers openly sang Nazi songs in the Polish army barracks and circulated copies of the notorious Nazi newspaper Der Sturmer.

“As the Passover holiday approached in 1944, the Jewish soldiers were asking themselves if they escaped from the slavery of Egypt only to perish in the wilderness,” Prof. Wald told JNS.org. “They couldn’t stand the constant anti-Semitic taunts, threats, and harassment any longer—so they staged a mass exodus from the Polish army.”

The first two groups of Jewish deserters, numbering about 200 in total, were granted their request to be transferred to the British army.

But when Private Wald organized a third group to leave, the British Foreign Office and Polish government-in-exile decided to make an example of them, in order to deter further desertions. Wald and 20 comrades were imprisoned, which is where they found themselves on Passover. Their lonely prison cells were a far cry from the previous year’s seder, where the celebrants had been joined by representatives of the Polish High Command, and had concluded the meal with hearty renditions of both the Israeli national anthem “Hatikvah” and the Polish national anthem.

As the date of the court-martial neared, sympathizers in the British Parliament and the press spoke out. MP Tom Driberg announced that he had “a whole drawerful of personal testimonies to the kind of [anti-Semitism] they are experiencing, written out laboriously in Polish, or, pathetically, in broken English.” MP William Gallacher asked, “Supposing the [U.S.] Government gave a bunch of Englishmen power over a mixed bunch of Englishmen and Scotsmen, and the Englishmen started ill-treating the Scotsmen, would not the Scotsmen be entitled to go to Washington and say, ‘You have given the power to the wrong people?’”

An editorial in the Birmingham Gazette declared, “It is clear that not only Germany will have to be re-educated after the war, but we may be faced with an anti-Semitic Poland almost as urgently in need of re-education as Germany itself.”

After a trial behind closed doors, the 21 Jewish soldiers were convicted of desertion. But under the pressure of public protests, the Polish authorities meted out suspended sentences to some of them and pardoned the others.

By the time Passover came the following year, Max Wald was serving in the British army. So was Ron Adler, who volunteered for training in England with the Polish navy-in-formation, and then was granted a transfer to the British army. As they sat down at their seder tables in April 1945, World War II was finally drawing to a close—as was the tragic story of Jewish soldiers who put their lives on the line for the Polish army, only to find themselves victimized by their fellow soldiers.

Dr. Rafael Medoff is director of The David S. Wyman Institute for Holocaust Studies, in Washington, DC. His latest book is “FDR and the Holocaust: A Breach of Faith.”