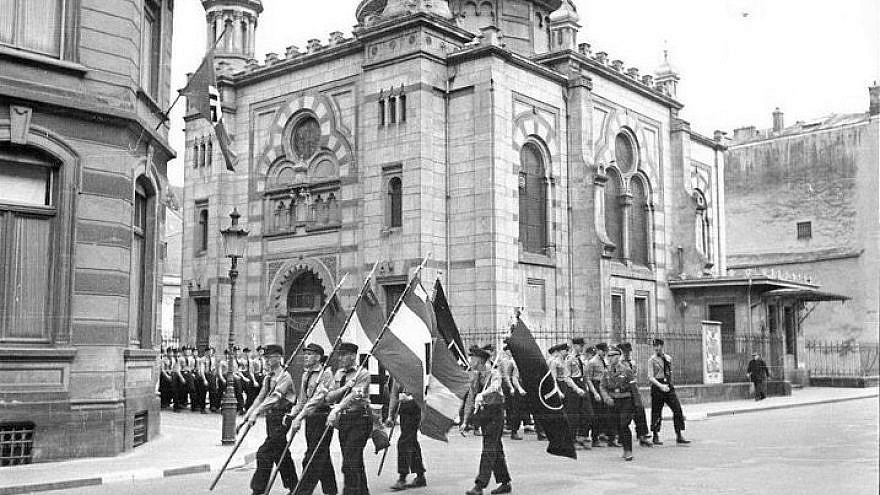 A Nazi parade by the synagogue in Luxembourg in 1941, which was destroyed in 1943. Credit: Wikipedia.
Spread the word.
Help JNS grow!
Share now:

(January 27, 2021 / Israel Hayom) The Luxembourg government is set to sign a historic agreement on Wednesday to pay reparations to Holocaust survivors, return Jewish property to its rightful owners and preserve the history of the local Jews who were persecuted during the German occupation.

The agreement had been formulated over the last year during the expeditious negotiations between the World Jewish Restitution Organization and the governments of Luxembourg, the United States and Israel. Details of the agreement will be made known at the signing ceremony.

The agreement is one of the latest achievements of former U.S. President Donald Trump who worked, among other things, to advance the issue of returning Jewish property looted during World War II to its rightful owners.

The signing ceremony was initially scheduled to take place two weeks ago, but in the aftermath of the U.S. Capitol violence, the Luxembourg government decided to postpone it until after the new administration took office.

Luxembourg was a neutral country occupied by Germany on May 10, 1940. At the beginning of World War II, some 4,000 Jews lived in the country—a third of whom had fled from Germany. The Nazi regime appointed a governor of its own, a member of the Luxembourg Nazi Party.

Despite trying to persuade the local population to join the Reich voluntarily, the locals vehemently opposed the Nazi regime. This resistance did not include active assistance to Jews, but most Luzembourgians did refrain from participating in the persecution of Jews. For example, an Italian architect had to be brought in to destroy the main synagogue in the capital, as the locals refused to demolish the building.

Four months after the beginning of the occupation, in September 1940, the anti-Semitic Nuremberg Laws were enacted. A year later, the occupation authorities banned the Jews from leaving the country. Until then, 2,500 Jews managed to escape, although some were arrested and sent to concentration camps.

Starting in October 1941, the Germans began deporting the remaining Luxembourg Jews to concentration camps in Auschwitz, Terezin and Lodz. Jews were first gathered in a monastery in the north of the country, then transported to their deaths.

Although the Luxembourg government enacted a law to return Jewish property stolen by Nazis, many matters remain unresolved, such as the dormant bank accounts of those persecuted by the Nazis and other victims, and reparations for Jews who did not own property in Luxembourg or weren’t its citizens.

Luxembourg Prime Minister Xavier Bettel, who is of Jewish descent, has worked for several years to recognize the role of the Luxembourg government in the persecution of Jews.

Five years ago, the Chamber of Deputies adopted a resolution seeking the pardon of the local Jewish community for the suffering that had been caused to it, while recognizing the role of government officials in the crimes committed.