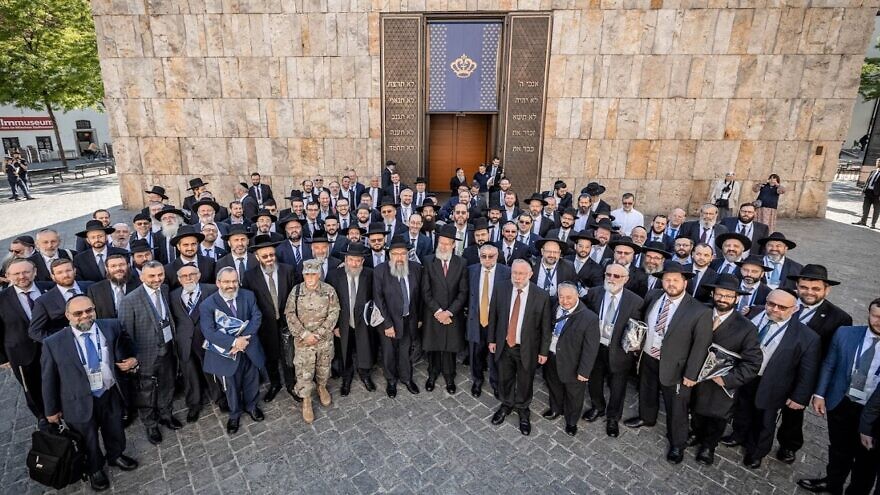 A group photo outside of the Ohel Jakob Synagogue and Jewish Community Centre in Munich, Germany, in June 2022. Credit: The Conference of European Rabbis.
Spread the word.
Help JNS grow!
Share now:

(June 14, 2022 / JNS) The Conference of European Rabbis (CER) is launching a ground-breaking initiative through the creation of a new international division.

Over the last few years, rabbis from outside Europe—notably from Latin America and Muslim-majority countries in the Middle East—have asked whether they, too, might benefit from some of the services that the CER already provides to European rabbis.

In 2019, rabbis from Latin America made the request at the CER Convention in Antwerp. Now, rabbis from Muslim-majority countries have done so with some, like the UAE, seeing significant growth with new synagogues, kosher restaurants and Jewish community centers now opening.

During the 32nd Convention of the CER, held last month in Munich, Germany, rabbis met to discuss how to proceed. The conversation included chief rabbis and other leading rabbis from (in alphabetical order) Argentina, Azerbaijan, Chile, Colombia, Georgia, Guatemala, Iran, Mexico, Morocco, Panama, Tunisia, Turkey, the United Arab Emirates and Uruguay. They were even joined by a representative of Agudath Israel of America.

This body is to be overseen by Chief Rabbi Pinchas Goldschmidt, president of the Conference of European Rabbis, who recently left his position in Moscow; Chief Rabbi Haim Korsia of France; and Rabbi David Yosef of Israel.

Nearly 20 rabbis from 17 countries in the Middle East Region and South America will be supported in matters relating to beth din procedures, religious training and general community engagement, such as learning and outreach opportunities.

Gady Gronich, CEO and chief of staff to the president of the CER, and Rabbi Aharon Baskin of the CER will lead the practical running of the division. Rabbi Aharon Kotler, president emeritus at Beth Medrash Govoha in Lakewood, N.J., has also been involved in the formation of the International Division, expressing his desire to establish more kollels in both South America and Europe.

Goldschmidt said “this is a truly historic moment for the CER. We are expanding our support to South America and the Gulf States. Wherever rabbis request our help, we will aid them.”

“We are proud to play our part in strengthening and celebrating Jewish life in Europe and in other communities around the world who have sought our help and expertise,” he continued. “It stands as a testament not just to the organizational strength of the CER that has supported and advocated for European Jewry for more than half a century, but also, thank G-d, to the flourishing of Jewish communities worldwide.”