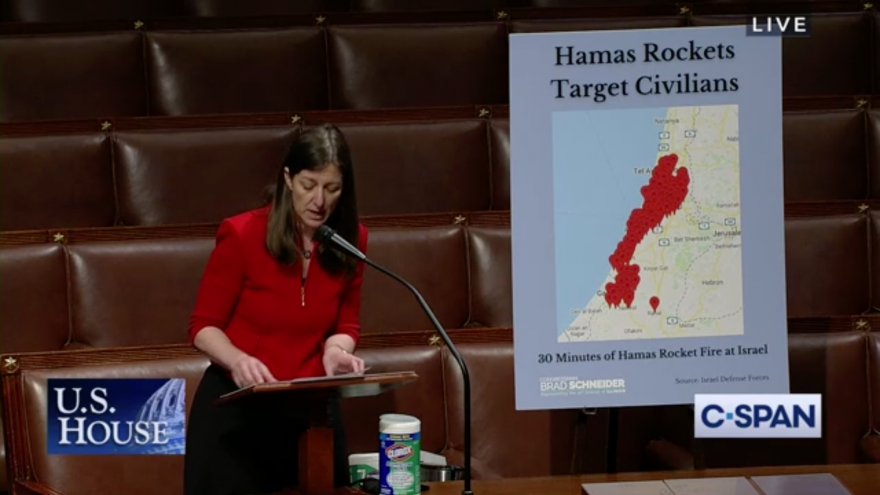 Rep. Eliane Luria (D-Va.) speaks on the floor of the U.S. House of Representatives on the conflict between Israelis and Palestinians, May 13, 2021. Source: Screenshot/C-SPAN.
Spread the word.
Help JNS grow!
Share now:

DMFI PAC president Mark Mellman said in a news release that the candidates on the list all demonstrate a willingness to fight for a strong U.S.-Israel relationship, and that the group is well-qualified and diverse.

He added that the candidates understand that “being pro-Israel is both good policy and good politics.”

According to the release, several of the Senate candidates endorsed—Kelly, Hassan and Masto—are running in critical battleground states. Their re-election has a direct effect on the control of the Senate.

DMFI PAC also announced the release of its first TV advertisement of the 2022 midterm election cycle, supporting incumbent Rep. Shontel Brown (D-Ohio) in Ohio’s 11th Congressional District. Brown is again being challenged by former State Sen. Nina Turner after Brown defeated Turner in a special election primary last fall, with most Jewish pro-Israel organizations, including DMFI, strongly backing Brown for her pro-Israel positions compared to Turner, who has been critical of Israel.

More endorsements from DMFI are expected during the campaign cycle.