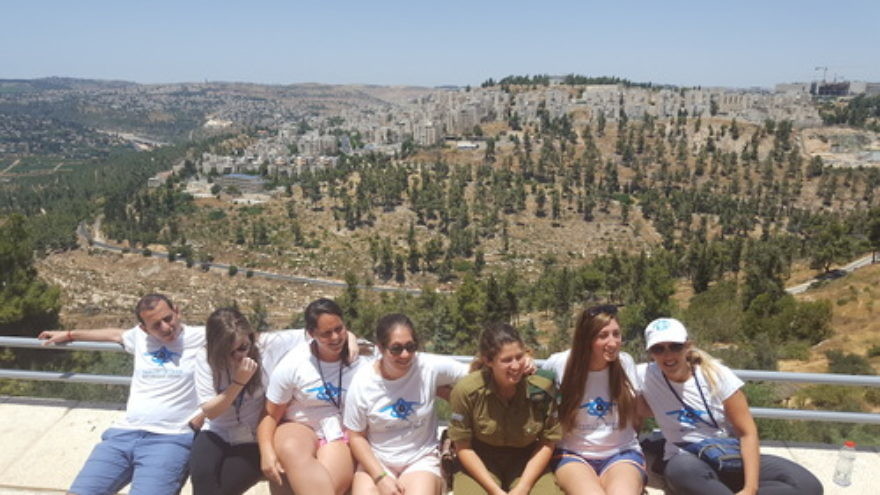 That’s the whole idea behind the American Physicians Fellowship for Medicine (APF), a specialized track within the Taglit-Birthright Israel program offering free trips to Israel for Jews ages 18-26. For the last 11 years, APF has been showing tomorrow’s medical professionals from across North America the Israel most of them have only seen in news reports—while creating memories, loyalties, and friendships designed to last a lifetime.

Brittany Bunkis returned from her APF experience on June 9. Among this year’s 39 program participants, roughly half of them were—like Bunkis—students in medical school or other healthcare programs. The other travelers were certified healthcare professionals, including nurses, doctors, and occupational and physical therapists.

“Being in Israel was eye-opening, but at the same time I felt completely comfortable,” the 22-year-old Bunkis told JNS.org.

“I’ve been to Russia and England, but when I met Israelis, especially the soldiers, the conversations were somehow personal as soon as we met. We were so different and yet so similar, and we had so much in common. And I was aware the whole time that the only reason I could be there is that some philanthropists made it possible,” she said.

Along with must-see Israeli sites including the Kotel (Western Wall) in Jerusalem, Masada, and the Dead Sea, this year’s 10-day APF journey was packed with tours designed to expose the group to the strengths and challenges of Israel’s healthcare field.

Accompanying the 39 participants was Dr. Jeffrey Devries, president-elect of APF. It was the second year that Devries—associate dean and director of graduate medical education at Oakland University William Beaumont School of Medicine in Royal Oak, Mich.—helped lead the tour.

“The trip enables them to begin a lifelong process of trying to integrate their emerging identities as medical professionals, members of the Jewish community, and supporters of Israel,” Devries told JNS.org. “They have ‘skin in the game’ in each of these domains, and they should understand that not only are they not contradictory, but they can strengthen one another.”

The trip participants also formed a tight-knit community in a short amount of time. Being with others in the field was a big plus for Jonathan Gabriel, 25, who is heading to the Philadelphia College of Osteopathic Medicine this fall. “It was cool being with a lot of smart people—the Americans and the Israelis,” he told JNS.org. “We got into good discussions over the things we’re all going through.”

One focus of the tour was the values that make Israel and its medical community stand out. Dr. Ofer Merin—who heads up the trauma unit at Jerusalem’s Shaare Zedek Medical Center and is commander of the Israel Defense Forces (IDF) Field Hospital Unit, which is responsible for the Israeli military’s mobile medical teams that are dispatched to crisis zones around the world—told the group that the IDF Field Hospital Unit has become known for its ability to establish working field hospitals within six hours of arriving at a crisis location.

“It just happens to be that Israel, which is on the forefront of biomedical engineering and treatment of trauma and stroke, is a sterling example of altruism in responding to crisis all over the world—exemplary both in medical innovation and in moral vision and caring. It treats its enemies with the same dedicated care that it provides its citizens,” said Rabbi Yitzhak Breitowitz, a former law professor who was already a noted expert in medical matters while he was working as a rabbi in Silver Spring, Md., before making aliyah.

Jewish values were also spotlighted when the group visited the Save a Child’s Heart (SACH) facility outside of Tel Aviv, where participants witnessed children with heart conditions from around the world being brought in for the latest cutting-edge treatments.

As part of its visit to SACH, the team met Dr. Asael Lubotzky, a man Devries describes as “a true hero.” Lubotzky risked his life to rescue fallen comrades during the Second Lebanon War of 2006, when an explosive was fired into his tank. He now walks with the aid of crutches and braces, but his injuries did not stop him from living his dream. Lubotzky is in the pediatric residency program at Shaare Zedek in Jerusalem.

At an IDF base where physicians and medics are trained, the APF participants experienced a simulated attack scene complete with sounds of whizzing bullets, sirens, explosions, and flashing lights. Through this exercise, the medical professionals and students learned to keep calm and function under emergency conditions.

“It’s amazing to see what a small country can do, to train their doctors and EMTs to be ready for anything on a daily basis,” said Kathryn Shapero of Boise, Idaho, a veterinarian who just finished school and has started her first job. “These are challenges that American medical schools don’t have to think much about.”

Indeed, the pressures and threats Israel faces immediately resonated when the APF participants were waiting for their flight back to the U.S. and heard of the news of June’s shooting attack at Tel Aviv’s Sarona market, in which four Israelis were killed.

“It shook us,” Jonathan Gabriel said. “But then we got home and heard about the mass killing in Orlando, and I started thinking maybe we’re safer in Israel after all.”

For many of the students, the trip was a way to combat the negative anti-Israel messaging they often hear on their campuses. “The best argument against that is to be exposed to the real Israel,” said Devries. “Once they see the way things really are, that is the most powerful argument.”

Each trip participant interviewed by JNS.org said they left Israel wanting more of the Jewish state in their lives. Gabriel is thinking about completing an elective rotation in Israel.

“I have a friend who did part of his training in Uganda. Why not Israel?” he said.

“My dad is Catholic and my mom is Jewish, and I didn’t really know how I felt. But on this trip, I was able to connect the dots when I saw that my values are more Jewish than I ever realized,” said Brittany Bunkis. “I came back and said, ‘I think I really am a Jew, that being Jewish really is part of my life.’ Now I am thinking all kinds of new things, like coming back [to Israel] and doing some clinical rotations. I think I could really have an impact there.”