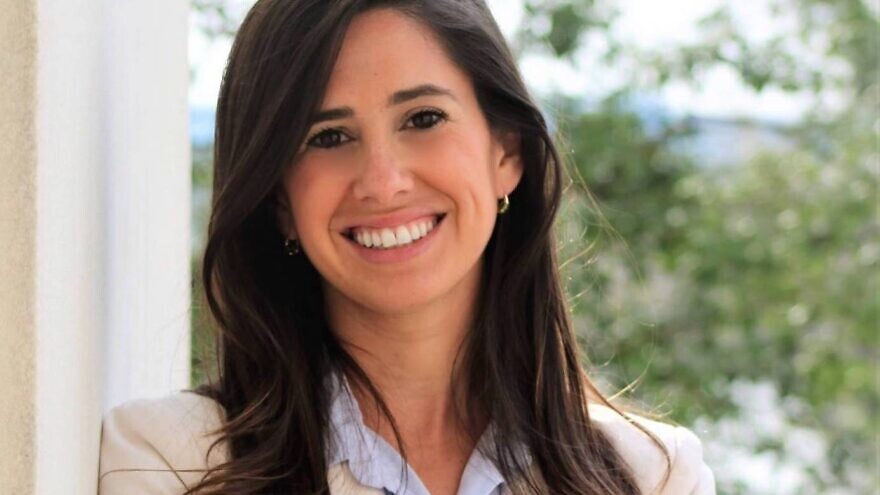 (August 19, 2022 / JNS) Shelley Greenspan’s résumé runs the gamut—from Capitol Hill to the private sector, presidential races and nonprofits. She has worked for AIPAC and Amazon, and campaigned for Hillary Clinton and Joe Biden.

Late last month, the Jewish advocacy and outreach veteran was named as the White House liaison to the Jewish community, replacing Chanan Weissman.

“It’s rare to find a position that sits squarely at the center of the Venn diagram of who you are. I am Jewish. I am an American. I am a public servant,” Greenspan told JNS in her first comments to the media since assuming her new role.

Greenspan, a native of Miami Beach, Fla., joined the White House this summer as a policy advisor for partnerships and global engagement at the National Security Council. She manages public-private partnerships for the Academy for Women Entrepreneurs, a new program supporting women entrepreneurs around the world. Prior to that, she worked at the State Department as a civil servant.

Greenspan told JNS that strengthening the U.S.-Israel relationship is her priority.

“Last month, [U.S.] President [Joe] Biden arrived in Israel for the tenth visit of his career. Addressing Israel’s president and prime minister, he declared, ‘You need not be a Jew to be a Zionist.’ Truer words have rarely been spoken,” said Greenspan, who insists the directive comes straight from the top.

“President Biden has a lifelong connection to [Israel], and his charge to all of us is to make sure we’re doing all we can to strengthen Israel’s security, prosperity and integration into the larger region. That continues to be a priority for this administration, and I am committed to advancing this priority in my new role,” she said.

Along with reinforcing U.S.-Israel ties, Greenspan said she will concentrate on rooting out Jew-hatred.

“The president and vice president [Kamala Harris] know in their neshama, in their souls, that attacks against the Jewish community are a strike against the soul of our nation and the values we stand for. No matter its source or stated rationale, as the president has said, we must and we will condemn this prejudice at every turn, alongside other forms of hate,” said Greenspan.

Greenspan has extensive experience on Capitol Hill, managing legislative projects in the Senate Foreign Relations and House Foreign Affairs Committees for three years with AIPAC. She has also been a board member of the Anti-Defamation League and Jewish Women International. In February, she helped launch Jewish Democratic Women for Action, which seeks to expand Jewish outreach ahead of the November midterm elections.

“As President Biden said, we need to ‘focus on the ties that bind us together, not tear each other apart.’ We each have a role to play in building bridges in our communities across the country and throughout the world. Focusing on shared values and common interests is essential for effective policymaking.”

“I grew up in South Florida. I went to an Orthodox day school, a Conservative summer camp and a Reform synagogue. I consider myself a Jewish mutt. I love and embrace the diversity and passion of this community,” she said.

The Jewish liaison position often requires engaging parts of American Jewry opposed to administration policy on a host of issues, and a deep understanding of the subtleties that distinguish a number of Jewish denominations and groups. Greenspan told JNS she will continue with the regular online forums, pre-Shabbat briefings and open events that Weissman organized for the Jewish community. Guest speakers at these events have included Second Gentleman Doug Emhoff, Principal Deputy Assistant Secretary for the Bureau of Near Eastern Affairs Yael Lempert and Deputy National Security Advisor Jon Finer.

“This administration is committed to maintaining a two-way dialogue between the White House and communities across the nation, ensuring that diverse voices are heard and that concerns are translated into action. We’re in place to support the president’s goal of building a government that is inclusive, transparent, accountable and responsible to its citizens,” she said.

Greenspan noted Biden’s visit to Yad Vashem last month and a widely circulated video of him approaching two Holocaust survivors, who began to stand in respect. Biden insisted they remain seated and crouched down on one knee to speak with them. She said it struck a potent chord with her.

“It’s even more meaningful for me to serve in this role as the granddaughter of a Holocaust survivor. My Zaydie [Yiddish for ‘grandfather’] was the only survivor in his family,” she said. “Their granddaughter not only has the honor of working in the White House but for a president whose record of support for Holocaust survivors is second to none.”