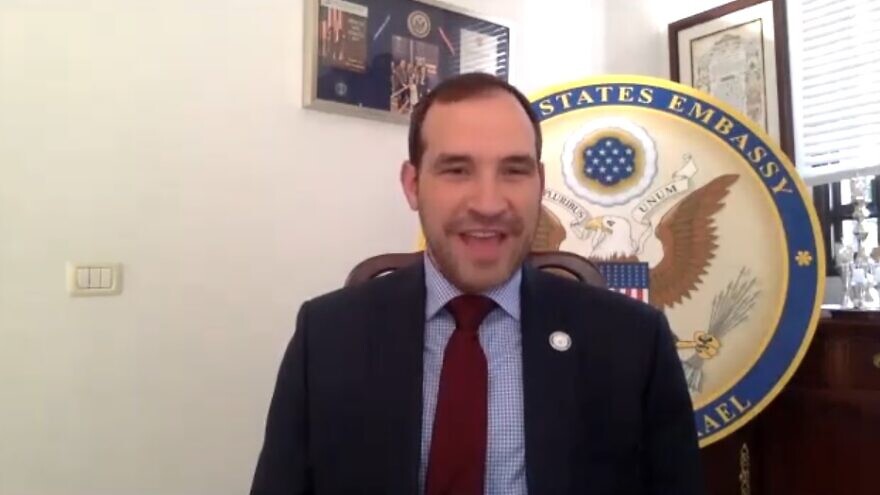 (November 23, 2021 / JNS) Aryeh Lightstone, former special envoy for economic normalization for the Abraham Accords and chief of staff to former U.S. Ambassador to Israel David Friedman, believes that the Biden administration needs to focus on bolstering Israel’s efforts for regional peace and not rewarding the Palestinian Authority by re-opening the U.S. consulate in Jerusalem.

“Biden made the promise to open the consulate, which seems to be against U.S. law under the [1995] Jerusalem Embassy Act and also against Israeli and international law. I will let the lawyers and politicians fight this out. I’m a civilian. But I think the narrative matters,” he told JNS as part of a special briefing Nov. 18 hosted by American Friends of Likud.

He explained, “Israel has now extended its hand in peace to five different countries in the past 12 months. Every one of those countries from Sudan to Kosovo to Morocco to the UAE to Bahrain have only changed their relationship with one country: Israel.”

“To me,” he said, “if I was asking my Republican or Democratic senator or congressman, mayor or dogcatcher to speak to the Biden administration, I would ask, ‘Why aren’t we rewarding the absolutely fantastic efforts by the Israeli people and government in pursuing peace? What are we pushing [opening a consulate] for? You have people [in Israel] who are pursuing peace and you have people [in the P.A.] who are still paying people to kill Jews.’ I think everyone would agree that we should reward the peacemakers and we should not reward those people who are anti-peace at this moment, with the various nefarious laws that the P.A. has.”

During the event — “Embassy (and a Consulate?) in Jerusalem, Israel’s Undivided Capital” —Lightstone argued that the most significant accomplishment for Israel under former U.S. President Donald Trump was “not the recognition of Jerusalem, but rather sovereignty.”

Sovereignty, he explained, means telling Israel, “You are an adult country, our number one ally in the region if not the world. Don’t rely on us to tell you what to do. You tell us what you want to do and ask our opinion, but make the decisions in the best interests of the State of Israel.”

However, Lightstone said that “it did not take very long for the current administration to try and put Israel back into a box.”

‘It is difficult to understand where the win is’

Regarding the Biden administration’s desire to rejoin the Iranian nuclear deal, Lightstone said, “The administration has not learned the lesson of Afghanistan. It is difficult to understand where the win is with any type of deal with Iran. I don’t understand why there is this pursuit other than to try and prove a failed policy of the past correct today. I can’t intellectualize something totally irrational.”

The U.S. along with other world powers and Iran will convene on Nov. 29 in Vienna to renew negotiations over Tehran’s nuclear program. The latest round of negotiations is the first under Iran’s new president, Ebrahim Raisi.

On the subject of Israel’s normalization deals with Arab states, Lightstone noted that the Biden administration initially refused to utter the phrase “Abraham Accords.”

“This was not only childish and foolish, it was a cause of tremendous disappointment and embarrassment for millions of intelligent, well-meaning people — thoughtful voters, who voted for President Biden,” he said.

He went on to tell the group that “from a U.S. perspective, I want to see a transformed Middle East. The best way to slow down the progress of the Abraham Accords is to put Israel in a corner on the consulate issue, which does nothing other than appease a very small portion of President Biden’s support group of the progressive left.”

Lightstone added, “The Abraham Accords countries are not asking for this. Egypt and Jordan are not. The P.A. leadership — who still pays people to kill Jews — why their opinion matters at all is beyond common sense.”

He described the forces for or against the advancement of the Abraham Accords as “the great competition for what Islam is going to look like over the next 50 years.”

Now that he is no longer Friedman’s chief of staff, Lightstone said that he is working in the business sector, but also recently helped put together a documentary series on the Abraham Accords through the former ambassador’s new organization, “The Friedman Center for Peace through Strength.” He said that the U.S. “should be supporting and promoting the UAE, Bahrain and Moroccan view of leadership as opposed to some of the nefarious characters in the area.”

“We need to fight against the Iran deal, consulate and BDS with everything we have,” he said, “but at the same time, we have to be fully excited and supportive of the Abraham Accords.”