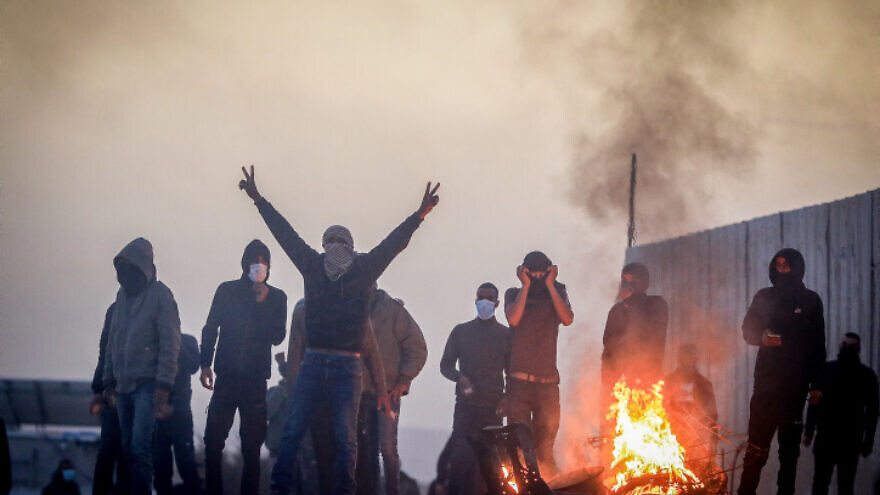 Bedouin riot over tree-planting by the Jewish National Fund, outside the village of al-Atrash in the Negev desert, Jan. 13, 2022. Photo by Jamal Awad/Flash90.
Spread the word.
Help JNS grow!
Share now:

(February 10, 2022 / JNS) Four Arab citizens of Israel suspected of assaulting a Jewish-Israeli journalist in the Negev were detained last month, the Israeli Security Agency (ISA) and the Israel Police revealed on Thursday.

Maharan Abu Adra, Balil Abu Adra, Kerem al-Kadi and Ismail al-Kadi, all aged 18-19, were held on suspicion of involvement in assaulting Haaretz reporter Nati Yefet and torching his car, in addition to throwing stones at police.

Yefet was attacked after he arrived at the Segev Shalom intersection to cover the violent Bedouin protests against Keren Kayemeth LeIsrael-the Jewish National Fund tree-planting ahead of the Tu B’Shevat holiday. Although Yefet presented his press pass, about 20 Bedouin protesters attacked him, stole his car, then set it on fire. He emerged uninjured after being extricated by police.

According to the ISA, the investigation revealed that the young men had been involved in disturbances in Segev Shalom in the day leading up to the assault and their arrest. Their actions included throwing firebombs at police, burning tires and blocking the access road to the area.

“The ISA and the Israel Police view with utmost gravity any involvement by Israeli citizens in terrorist activity, and will continue to deal with those who harm the security of the citizens and security forces of the state to the fullest extent of the law,” the ISA said in a statement.

The suspects’ files have been turned over to the Southern District of the State Attorney’s office, which is expected to issue serious indictments against them in the Beersheva District Court.

The ISA noted that three of the four were born in Israel, with a parent of one of them having received status in Israel in the framework of “family reunification.”

The first reading of an updated Family Reunification Law passed in the Knesset earlier this week.