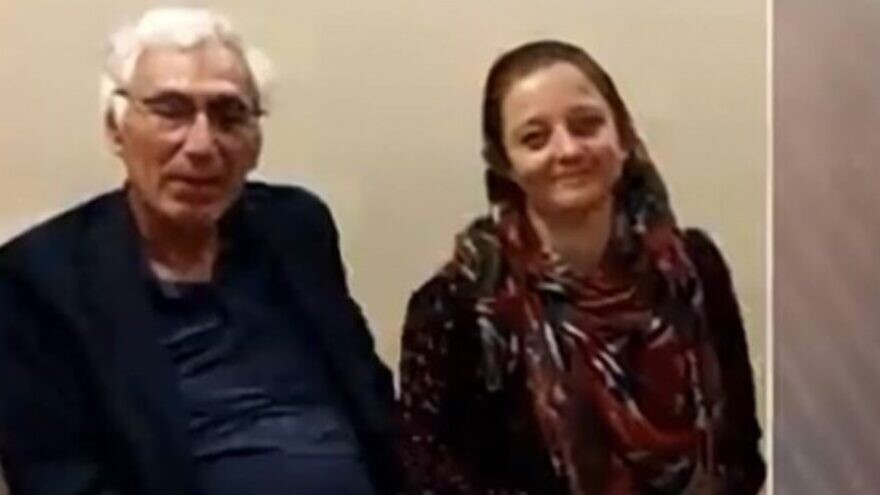 Jacques Paris and Cécile Kohler were arrested as they prepared to board a flight at Imam Khomeini International Airport on May 7. Source: Twitter.
Spread the word.
Help JNS grow!
Share now:

(October 6, 2022 / JNS) Following the release of a video on Thursday in which two French nationals appear to confess to espionage amid weeks of unrest that Tehran has blamed on foreign adversaries, Paris blasted Iran for its “dictatorial practices” and for holding two of its citizens prisoner.

“I am Cécile Kohler, I am an intelligence and operations agent at the DGSE [the Directorate General for External Security, France’s equivalent of the CIA and MI6]…We were in Iran to prepare the ground for the revolution and the overthrow of the regime of Islamic Iran,” Kohler, a high school teacher and educational trade union official, said in the video.

In May, Iran’s Intelligence Ministry announced the arrest of the two Europeans for allegedly fomenting “insecurity” in the country. France has criticized their detention and demanded that Kohler and her partner Jacques Paris be released immediately.

Separately, Iran has indicted former soccer player Ali Karimi in absentia for his support of demonstrations over the death of Mahsa Amini in morality police custody.

Meanwhile, as part of increased efforts to end protests that have lasted more than two weeks and were triggered by the death of  Amini, 22, Iranian security personnel deployed in force at several universities on Wednesday.

“There are lots of security forces around Tehran University. I am even scared to leave the campus. Lots of police vans are waiting outside to arrest students,” a student in Tehran told Reuters.