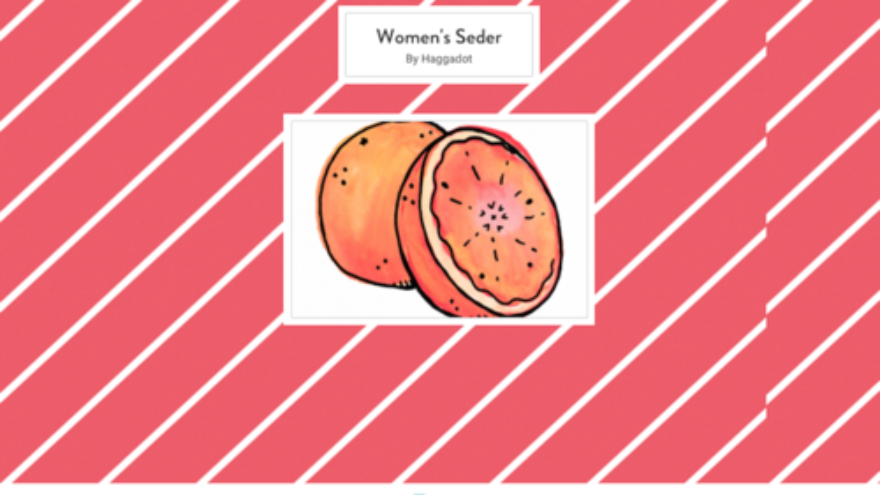 The cover of a Passover Haggadah that was customized for a women's seder and created through the Haggadot.com platform. Credit: Haggadot.com.
Republish this article
1017 WORDS
Spread the word.
Help JNS grow!
Share now:

The Hebrew word “haggadah” means “narration” or “telling.” As the Passover seder’s instruction manual, the haggadah is perhaps the most important tool for fulfilling the Passover mitzvah of telling the story of the Jewish exodus from Egypt (a mitzvah that is mentioned six times in the Torah).

The Rambam (Maimonides) in his Mishneh Torah explains that relating the miracles and wonders that were done for our fathers in Egypt on Passover night is a positive commandment, and that it is a mitzvah to inform our children about it. Many interpret this to mean that telling the Passover story is actually two mitzvahs: a mitzvah to tell the story among adults and a mitzvah to teach children about the story.

ArtScroll and Maxwell House have done their parts to make a simple seder manual accessible and inexpensive. But sometimes just reciting the words of the seder isn’t enough to engage seder participants—or even to help them to understand the Passover story.

“What I learned is that my family had never really understood the service they had been using for many, many years,” says Barbara Bayer of Overland Park, Kan., who about 30 years ago decided to write a haggadah, which she continues to revise each year. “I went to simple sources that told the story simply and succinctly and the family loved it and still does.”

Making your own haggadah is not as complicated as one might think. For starters, there are many Web platforms that allow you to create a customized seder manual by providing curated sources from across the Jewish community. Haggadot.com, for instance, offers readings, artwork, and video clips to enliven the seder. The clips can be assembled in one of the website’s templates.

Other sites, such as livelyseders.com, allow users to download an English translation of the complete traditional Ashkenazi haggadah text, which can be cut and pasted to create your own piece. Jewishfreeware.org carries a range of editions of haggadot, each one directed to specific interests and needs, in terms of the haggadah’s length and rituals of choice. All the files are downloadable and some are editable.

Once you’ve found your base, personalizing the haggadah for your seder experience can be loads of fun and really creative, according to those who do it.

Renee Goldfarb of Solon, Ohio, says one year she set up a laptop, projector, and screen at the Passover table and showed a relevant video for each of the 15 steps of the seder. Suzanne Levin-Lapides, on the other hand, compiled her family haggadah from the texts of various seders for women she had attended in her Baltimore community, adding an orange to her seder plate as a symbol of feminism as well as the inclusion of LGBT individuals and other marginalized groups within the Jewish community.

At the Katz family home in Kemp Mill, Md., the Passover seder has been turned into a play by their 12-year-old daughter, Abigail.

“My daughter likes to do fun things around the holidays,” says Jill Katz with a chuckle of pride.

In this case, Abigail, who was 7 when she wrote the first version of her family seder, realized that among her family’s many guests, not everyone came from the same background. She says she wanted to create something that would make seder participation fun for everyone.

“Basically, it is like a script and everyone has a part,” says Abigail. “People take turns explaining what we do at each part of the seder and act out stuff also, like the splitting of the sea and the 10 plagues.”

The play’s actors—each assigned a seat at the table and a number based on what part they’ll be reading that evening—serve as narrators. Those who don’t know Hebrew are given English parts. Sometimes, everyone works together.

“We have two cloths for the splitting of the sea story. Everyone goes in a line and then people take turns being Moshe and they take a fake staff and put it into the cloths and then they split them. It’s really fun,” Abigail says.

Rachel Shekhtman of Kochav HaShachar, Israel, has an idea she adapted from one of her children’s school projects: dress up your children and their friends before the seder, and take pictures of them as different characters or acting out various scenes. Then, print the photos and create a haggadah in which the youths become the Passover story’s stars.

“Let’s say [you’re dealing with] the four sons or the 10 plagues—make cheap costumes, get some toy frogs or red food coloring to dye some water, and take pictures as you go,” Shekhtman explains. “Talk to them about what they are acting out as you take the pictures. Then when they get to that part of the haggadah, they will remember what they learned and make the connection between the lesson and the text.”

She adds, “They’ll see themselves in the haggadah.”

If you’re aiming for something more traditional—and less about the little ones—Yosef Silver of Overland Park has an idea. He keeps a do-it-yourself seder file on his computer, which he updates with new insights every year. Part of the experience is finding passages and interpretations from across Jewish perspectives that still jibe with his Orthodox traditions.

Each year, when his new haggadah file is ready, Silver sends a copy via Dropbox to his guests so they can review it and add their own thoughts in advance of the big day. One of the highlights of Silver’s expanded seder is a fifth cup of wine, added as an expression of redemption.

“I think people need to think more out of the box,” says Jill Katz. “People are often set on, ‘You have to say this and that.’ Even if you are rigid with the law…it is important to understand what you are saying. The halacha (Jewish law) is that you are supposed relate to the story you are telling, and that is what people should keep in mind.”