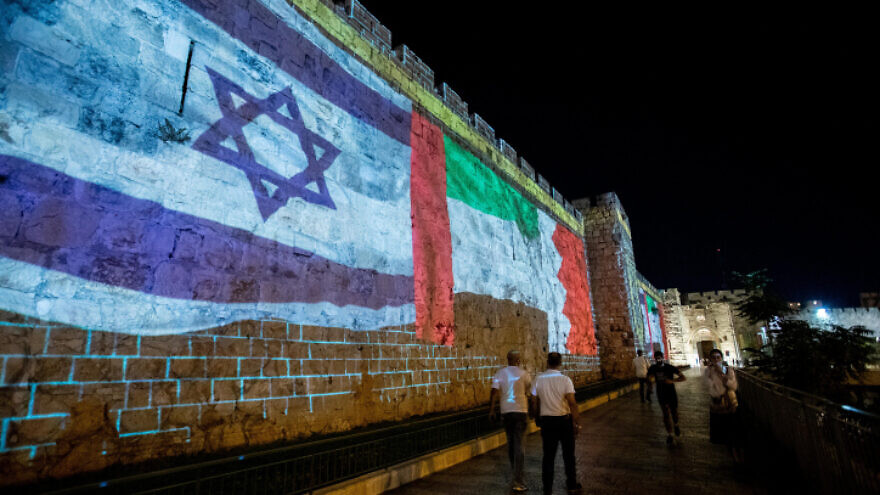 The flags of the U.S., United Arab Emirates, Israel and Bahrain are screened on the walls of Jerusalem's Old City, on September 15, 2020. Photo by Yonatan Sindel/Flash90
Republish this article
702 WORDS
Spread the word.
Help JNS grow!
Share now:

(October 22, 2020 / JNS) The Joint Arab List was alone in voting against the normalization deal with the United Arab Emirates in the Knesset, upsetting many Israeli Arabs that welcomed a move that is likely to become a key economic, education and tourism opportunity for the community.

The vote last week in the Knesset was 80 in favor and 13 against the agreement.

Shaheen Sarsur, who has been involved in Arab politics for more than 12 years and served as a parliamentary consultant for three previous Knesset members—the most recent being Talab Abu Arar of the United Arab List (Ra’am)—said the move by the Joint List was “not wise since it always presents itself as supporting peace so this seems like a double standard.”

“Peace is good, even if it does not deal directly with the Palestinians,” he said, adding that he doubts the Arab public supports the decisions by the Joint List to vote against the normalization agreement.

“Many Israeli Arabs will travel to the UAE and Bahrain, just like they travel to Turkey, and so if the Joint List members are against peace, then they shouldn’t later take advantage of it and travel to these countries like we know will occur,” said Sarsur.

Ghada Zoabi, founder and CEO of the Israeli-Arab news portal Bokra.net and a board member in the UAE-Israel Business Council, told JNS that the council started a few months ago, and that many Israeli Arabs support the normalization agreement and see opportunities for travel, business, education and more.

“The peace deal will positively affect the entire region, and Israeli Arabs that have family members there will more easily connect with them and study there just as some study now in Jordan,” said Zoabi.

The agreement acts “as a bridge for Israeli Arabs,” she added.

An estimated 1.9 million (20 percent) of Israel’s population is Arab, and prior to the latest deals, the only Arab countries open to them were Egypt, a popular tourist destination, and Jordan, where many attend college. Arab Israelis also travel to Saudi Arabia for the Haj pilgrimage, commuting through Jordan or another country since there are no direct flights from Israel.

Regarding opposition by Israeli-Arab parties in the Joint List, Zoabi said political leaders have their own personal interests and desire to make headlines.

“Most Israeli Arabs want a peace agreement between Israel and the Palestinians,” she said. “Forming other peace agreements with Arab states can’t hurt, and Arabs see the new opportunities created by this agreement.”

“The Joint List is acting like the Palestinian Authority in rejecting the deal, when, in fact, it will help Arabs in Israel and the Palestinian territories,” she continued, adding that in the case of the Joint List, they should not have come out publicly against the deal.

“Many Israeli-Arab businessmen were upset with the position because it only hurts their desire for business ties with Gulf states,” asserted Zoabi.

In fact, Zoabi claimed that many Israeli Arabs supported them in the last elections because they wanted to oust the right-wing government led by Prime Minister Benjamin Netanyahu, not because they necessarily support the entire Joint List agenda.

Zoabi revealed that some Arab Knesset members quietly support the UAE and Bahrain agreements, but were forced to vote against them and follow the Joint List leadership.

‘People-to-people relations is key to peace’

The UAE-Israel Business Council states on its website that it aims “to build mutually beneficial relationships between Emiratis and Israelis that advance business ties, investment and understanding.”

Zoabi said the council seeks to facilitate and connect between business entities in both countries, as well as in Israel based on cooperation between Jews and Israeli Arabs.

She pointed out other key figures on the council, such as Jerusalem Deputy Mayor Fleur Hassan-Nahoum and founding member Asher Fredman.

A founding member of the UAE-Israel Business Council and the Israeli-Emirati Forum, Fredman was on his way to the UAE on Tuesday evening and told JNS that “building people-to-people relations is the key to peace.”

Fredman, who also is a research fellow at the Kohelet Policy Forum, added that “the reception from the other side has been so warm and with such interest, respect and desire to build relations in various fields.”