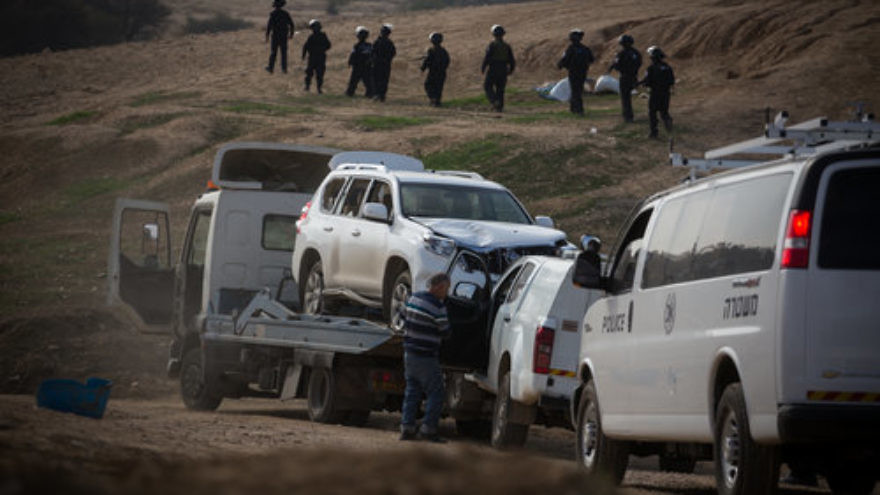 During the Jan. 18 Umm al-Hiran riots, Israel Police Advanced Staff Sgt. Maj. Erez Levi, 34, was killed in what Israeli officials are describing as a car-ramming terrorist attack, while the Arab driver’s supporters claim the incident was not terrorism. Most of the Joint Arab List party’s Members of Knesset (MKs) were present at the scene of the attack, taking advantage of their parliamentary immunity to agitate the already volatile situation and clash with police. Israeli Public Security Minister Gilad Erdan, therefore, is calling for an investigation into Arab MKs Ayman Odeh, Jamal Zahalka and Hanin Zoabi on suspicion of incitement to violence and murder.

“The vile attack was preceded by long and ongoing malicious and methodical incitement, with the participation of publicly elected officials from Israel’s Knesset,” Erdan wrote Jan. 19 to Israeli Attorney General Avichai Mandelblit.

The Israeli Supreme Court approved the demolition of Umm al-Hiran. According to a report published last year by the State Comptroller of Israel, one-third of the estimated 200,000 Israeli Bedouins live in unrecognized villages, some of which comprise no more than a few structures in the middle of the desert.

Bedouins have rejected the Israeli government’s efforts to regulate illegal construction and to promote economic development and resettlement. Israeli-Arab politicians, the Islamic Movement in Israel, and left-wing NGOs have encouraged Bedouins to reject the state’s proposed initiatives.

“There is no doubt that the Islamic Movement—the Northern Branch—has targeted the Bedouins in the Negev for the last two decades,” Dr. Mordechai Zaken, head of minority affairs in the Israeli Public Security Ministry, told JNS.org. The Islamist group, whose Northern Branch was outlawed by Israel in 2015, is trying to insert the Islamic religious dimension into Bedouins’ thought process and to exploit the issue of land disputes between Bedouins and the state, said Zaken.

“Slowly but surely, the more ‘moderate’ Southern Branch of the Islamic Movement has also planted a base in the Negev,” added Zaken, a former Arab affairs adviser in the Israeli Prime Minister’s Office.

The Israel Police released helicopter video footage of the Jan. 18 car-ramming attack on Twitter. The slain police officer, Levi, is survived by his wife and two young children. Musa Abu al-Qiyan, a Bedouin teacher, rammed Levi with his car and was reported to be a member of the Southern Branch of the Islamic Movement, with possible ties to Islamic State.

The police said in the tweet that the car waited on the side of the road with its lights off, and then sped up in pursuit of a group of officers. Israel Police Commissioner Roni Alsheikh said at Levi’s funeral, “Everyone knows that the terrorist was a teacher at a school where six teachers have already been arrested,” Yedioth Ahronoth reported. In July 2015, six Israeli Bedouins were arrested for spreading Islamic State ideology.

Al-Qiyan’s family members and Arab MKs claim that he was shot at before the ramming occurred and lost control of the vehicle. As a result of al-Qiyan’s death and the Umm al-Hiran demolition, Israeli Arabs are holding ongoing protests throughout Israel and are calling for an end to all demolitions of Arab homes.

Yet Amichai Yogev, southern director of the NGO Regavim—which describes itself as seeking to ensure a responsible, legal and accountable use of Israel’s land—said he “saw one of the Arab MKs confronting the police, and one tried to enter the area against police efforts to stop him, leading to a violent clash with his supporters.”

“The Arab politicians and NGOs set up a show for the cameras,” Yogev told JNS.org.

Regarding the question of whether al-Qiyan committed a terrorist car-ramming attack or was responding to being shot, Yogev asserted, “Nobody should have been driving there at 5 a.m. without headlights on. He had no reason to be there since he lives in the nearby city of Hura, only having built a few empty structures in Umm al-Hiran.”

“The police yelled at him and fired warning shots. Ramming the police was his clear goal,” said Yogev, noting that besides the Arab MKs, left-wing activists and other Beduins from surrounding villages such as Hura took part in the riots.

Al-Qiyan’s family was known to be radicalized, continued Yogev, explaining that many of the family’s members married Palestinians in the West Bank and have connections to Islamist groups such as the Islamic Movement in Israel and Islamic State. “Most Bedouins are not like this,” said Yogev. Indeed—despite the issue of the unrecognized villages—Israel’s Beduoin population has historically been supportive of the state, including serving voluntarily in the Israel Defense Forces and holding government positions.

Yet the Islamic Movement is increasingly swaying the Beduoin public against the government and in the direction of prioritizing Islam, according to the Public Security Ministry’s Zaken.

“If you count the number of mosques among the Bedouin today, you would notice a dramatic increase during the last two to three decades,” Zaken said, adding that prior to this period, there were very few mosques in Bedouin communities.

Gerald Steinberg, president of NGO Monitor, a Jerusalem-based research institute that tracks and documents international funding of pro-Palestinian groups in Israel, said that NGOs funded with European money are influencing media coverage of the Arab-Israeli conflict in general, with the Umm al-Hiran episode serving as the latest example.

“Many journalists and European diplomats treat political NGOs like Adalah, B’tselem, Rabbis for Human Rights and the rest as ‘neutral experts’ when it is clear that they are neither,” Steinberg told JNS.org.

“Claims and propaganda are taken at face value and repeated with no effort at independent examination,” he said. “While NGO Monitor and other researchers have slowly exposed this unprofessional relationship, there is still a long way to go.”