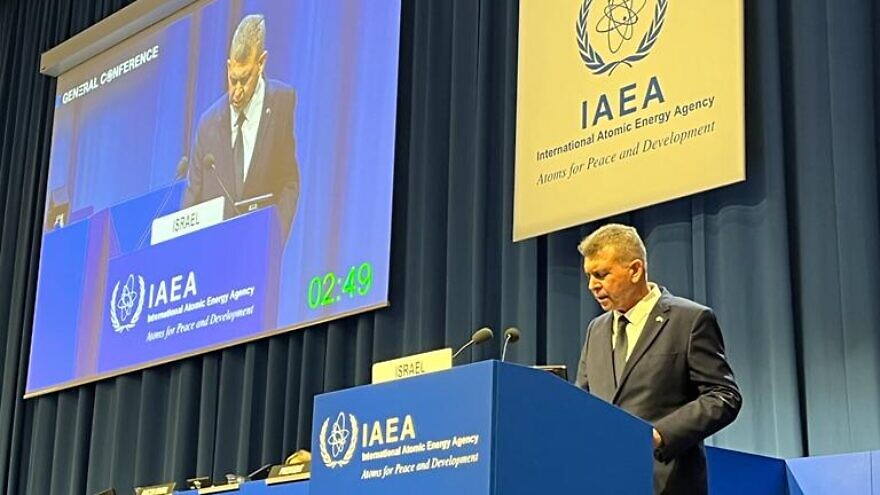 Speaking at the sixty-sixth General Conference of the International Atomic Energy Agency (IAEA) in Vienna, Edri said that it was now clear that Iran’s nuclear program was military in nature.

“Iran obtaining nuclear weapons is not an option that Israel nor the world can tolerate,” he said.

The IAEA Board of Governors’ resolution in June condemning Iran’s lack of cooperation with the agency reflected “growing international concerns regarding Iran’s ill conduct,” he noted.

Syria’s ongoing non-compliance with its IAEA safeguards obligations for more than a decade, he continued, was also a source of concern.

“Syria built an undeclared, clandestine military nuclear reactor at Dair Alzour,” said Edri, adding: “Syria’s non-compliance and lack of cooperation is extremely dangerous. The international community should stand behind the IAEA with a goal towards receiving clear answers from Syria once and for all.”

The statements came on the backdrop of Iran’s decision to resume dialogue with the IAEA over traces of nuclear activity discovered at undeclared Iranian sites.

Talks between the IAEA and Iran had reached an impasse after Tehran insisted that the nuclear watchdog close its files about the evidence of activity at three undeclared sites, which came to light following a 2018 Mossad raid on Iran’s nuclear archives in Tehran.

The issue has become an obstacle to the negotiations between Iran and world powers aimed at reviving the 2015 nuclear deal.

Tehran’s decision comes amid ongoing protests across the country that erupted following the death of a woman arrested on September 13 by Iranian morality police. A government crackdown has killed dozens of civilians that took to the streets in the aftermath of the death of Mahsa Amini, 22, on Sept. 16.