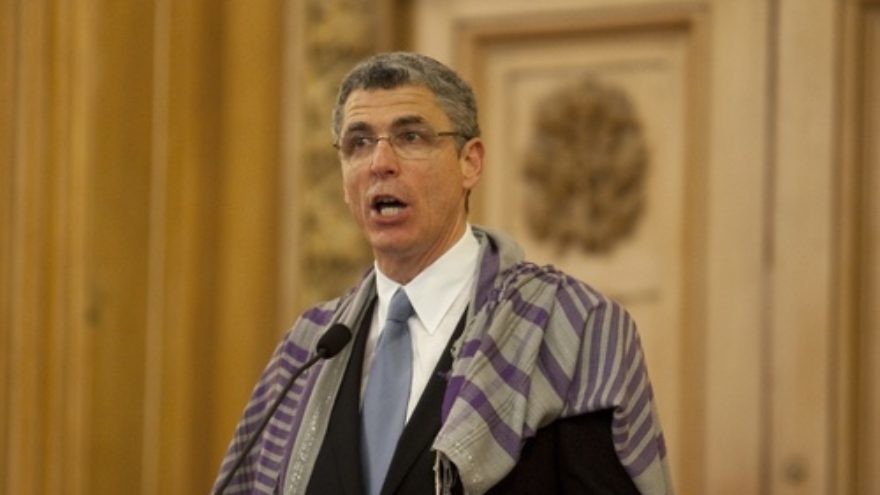 Union for Reform Judaism (URJ) President Rabbi Rick Jacobs, pictured, was accused of "divisive" leadership in a recent newspaper advertisement over his threat to pull the URJ out of the Conference of Presidents of Major American Jewish Organizations due to the Conference's rejection of the J Street lobby's membership application. Credit: Clark Jones.
Republish this article
1316 WORDS
Spread the word.
Help JNS grow!
Share now:

Members of Reform and Conservative synagogues have signed on to recent full-page advertisements in Jewish newspapers around the country, blasting their denomination’s leaders for supporting the (eventually failed) bid of the self-labeled “pro-Israel, pro-peace” lobby J Street to join the Conference of Presidents of Major American Jewish Organizations.

The 50-group umbrella organization in late April voted 22-17, with three abstentions and the rest of the members not showing up for the vote, to reject J Street’s membership application. J Street needed an affirmative vote from 34 Conference of Presidents members to gain admission.

Among the Conference members voting in favor of J Street were the Union for Reform Judaism (URJ) and the United Synagogue of Conservative Judaism (USCJ), umbrella organizations for their respective denominations. Both organizations came under scrutiny in an advertising campaign sponsored by a group called Jews Against Divisive Leadership, raising the question of whether or not the Reform and Conservative umbrellas’ decisions on the J Street vote accurately reflect the attitudes of America’s estimated 1.5 million congregants from those denominations.

“Voting to include J Street in the Conference of Presidents of Major Jewish Organizations was not advocating for diversity. It was falling for duplicity,” said the Conservative ad, which noted that J Street has accused Israel of war crimes when it defends itself from missile attacks from Gaza, gives a platform to advocates of the movement to boycott Israel, and has called on the U.S. not to veto U.N. resolutions that criticize Israel. The ad—signed by 60 people, along with the congregations they belong to—ran May 22 in the New York Jewish Week, The Jewish Press, The Jewish Advocate of Boston, the Washington Jewish Week, and the Baltimore Jewish Times.

By voting for J Street, the USCJ “acted contrary to the support for Israel we find so important in the Conservative movement,” the ad said.

The Reform ad, signed by 41 people and printed May 15 in the Jewish Journal of Greater Los Angeles as well as May 22 in the Florida Jewish Journal, accused URJ President Rabbi Rick Jacobs of “divisive” leadership due to his threat to pull the Reform umbrella out of the Conference of Presidents over the J Street vote.

“We told you that [Jacobs] would use his position to bolster the anti-Israel J Street. We told you that he would try to diminish American Jewry’s support for Israel,” the ad said, alluding to opposition to Jacobs’s URJ appointment over his former roles as a board member of the New Israel Fund and Rabbinic Cabinet member of J Street. “But we did not know quite how divisive Rabbi Jacobs would be. We did not expect that when he failed to persuade the Conference of Presidents to accept J Street as a major Jewish organization—which it is not—he would threaten to take the URJ out of the Conference and ask others to leave, too, over differences about Israeli foreign policy.”

In the vote, all four Conference member groups representing Reform Judaism and all but one (Mercaz USA) of four representing Conservative Judaism, voted in favor of J Street. Rabbi Stuart Weinblatt, leader of the Conservative-affiliated Congregation B’nai Tzedek in Potomac, Md., said the denomination’s leaders made their decisions on J Street without necessarily taking the entire movement’s pulse on the issue.

“I think part of what upset people really was the fact that certain leaders in the Conservative movement were so out front, advocating so strongly, which seemed not to take into consideration the feelings of various members of Conservative synagogues and rabbis who felt differently,” he told JNS.org.

Weinblatt said he was not surprised by the sentiments expressed by the ad.

“These are people who care deeply about Israel, who feel a sense of having been disenfranchised,” he said. “Usually most Jewish organizations are driven by consensus and trying to reflect the overall position of its members, and in this particular case it’s hard to gauge really how accurate a reflection it was to take the position that they took.”

Rabbi Jessica Kirschner, leader of the Reform-affiliated Temple Sinai in Washington, DC, said the ads did not reflect the beliefs of most Reform Jews, and defended the stance Jacobs took.

“The thing that I have heard most as a response to Rabbi Jacobs’s actions is an appreciation that the Reform movement was demonstrating leadership on the issue,” Kirschner said, adding that those she spoke to said they were glad that their movement “was speaking up and saying” that there “needs to be a rich and complicated conversation.”

Kirschner said she reads most of her Jewish news online, and that Jews Against Divisive Leadership’s method of placing ads in Jewish print newspapers is therefore probably ineffective if the group wanted to reach young Jews, the demographic J Street claims to represent most.

Jews Against Divisive Leadership also placed an ad that focused on Jacobs in Jewish newspapers in 2011, contesting his appointment as URJ president.

“We call on the Union for Reform Judaism to reconsider this divisive appointment,” that ad stated. “Do not drive mainstream Zionist Jews out of the Reform movement.”

Rabbi Joshua Segal—the rabbi emeritus of Amherst, N.H.-based Congregation Betenu, a Reform synagogue—signed both the 2011 and 2014 ads on Jacobs, and told JNS.org he believes that “J Street is to Zionism what Jews for Jesus is to Judaism.”

“To the extent that the URJ claims (through its affiliate ARZA, the Association of Reform Zionists of America) to be a pro-Israel entity, Jacobs’s positions certainly undermine that assertion,” Segal wrote in an email. “And the ad is just calling him to the carpet—perhaps an ‘I told you so’ to his election to his current job.”

Los Angeles resident Paul Jeser—who considers himself a member of both the Reform and Conservative communities, but prefers to identify as just Jewish—called Jacobs’s approach after the J Street vote “absurd.”

“The organizations [in the Conference of Presidents] have the right to vote the way they did, but then when you lose a vote and you threaten to pull out, it just show how immature and inappropriate your actions are,” Jeser told JNS.org.

Jeser did not sign the ads, but said he agrees with their message.

“It’s very obvious in my mind that the people who support J Street don’t understand how bad J Street is,” he said. “If they really delved into it and stopped drinking Kool-Aid, they would understand J Street is dangerous. [Members of the Conference of Presidents] make their decisions based on not right or left, but on right and wrong, and J Street, in my mind, is obnoxious and just has no right to be under any tent.”

Jessica Rosenblum—director of media and communications for J Street—dismissed the new ads, saying it does not surprise her “that there are 40 people in the Reform movement and 60 people in the Conservative movement who are strongly opposed to their respective leaders’ decisions to support J Street’s admission to the Conference of Presidents.”

“The Reform and Conservative movements voted to admit J Street to the Conference of Presidents, not because they agree with everything J Street says,” Rosenblum wrote in an email. “They did no more than faithfully represent the diversity of opinion within their movements—but such diversity is apparently unacceptable to the signers of these advertisements.”