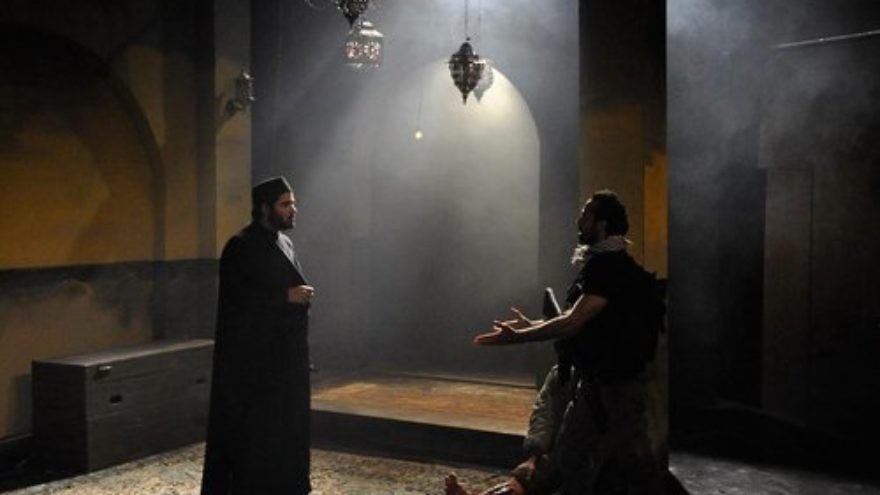 A scene from “The Siege,” a play that will be hosted at the NYU Skirball Center for the Performing Arts from Oct. 12-22. Credit: Sahar Rouhana.
Republish this article
913 WORDS
Spread the word.
Help JNS grow!
Share now:

American Jewish leaders are denouncing plans by a New York University (NYU)-affiliated theater to host a play that portrays Palestinian terrorists as heroes.

The NYU Skirball Center for the Performing Arts will host performances of “The Siege” from Oct. 12-22. The play focuses on the Palestinian terrorists who, in order to avoid capture by the Israeli army, seized Bethlehem’s Church of the Nativity in the spring of 2002 and occupied it for 39 days.

“The Siege” was created by the Freedom Theater of Palestine, which is based in the Palestinian Authority-controlled city of Jenin. Among those promoting the play on YouTube is Ibrahim Abayat, one of the leaders of the church occupation. The Israeli government has identified him as the killer of New York City native Avi Boaz, in Bethlehem in early 2002.

The play was first performed overseas in England in 2015. The Board of Deputies of British Jews charged that it “promoted terrorism as positive and legitimate,” and the Zionist Federation of Great Britain and Ireland staged a protest rally outside the premiere.

“Having witnessed firsthand the ‘siege,’ a blatant terrorist outrage, I am especially outraged at this presentation,” Malcolm Hoenlein, executive vice chairman and CEO of the Conference of Presidents of Major American Jewish Organizations, told JNS.org. “Diminishing the true nature of this brutal attack serves to whitewash terrorism at a time when this scourge is taking so many lives and threatening so many more.”

Hoenlein visited the scene of the siege at the time, together with WABC radio show host John Batchelor. “We were taken there in an [Israeli] armored vehicle,” Hoenlein recalled. “We saw the terrorists in the church wearing nuns’ habits, marching back and forth with rifles. They terrorized the people in the church.”

In a statement to JNS.org, the Anti-Defamation League said that “based on past reviews, we believe it presents a one-sided Palestinian view of the events of 2002, [when] Palestinian terrorists targeted Israeli civilians city buses, in cafes, and even during a Passover seder, killing hundreds. We would hope those going to see ‘The Siege’ educate themselves as to the full events of this period and do not accept this representation as the full picture.”

B’nai B’rith International charged that the play “glorifies terrorism and is not appropriate on any stage…At a time when terrorism has struck in so many places, it is highly irresponsible and reckless for such a public staging to take place.”

Betty Ehrenberg, executive director of the World Jewish Congress for North America, said, “Plays that glorify, whitewash, or garner sympathy for terrorists do a disservice to history and also present a danger, by romanticizing terror and providing the rationale for it.”

“The Talmud teaches, ‘He who is merciful to the cruel is destined to be cruel to the merciful,’” noted Farley Weiss, president of the National Council of Young Israel, which represents more than 100 synagogues nationwide. “This play is merciful to the cruel terrorists and cruel to their Jewish victims. Nobody should be putting on plays that portray terrorists positively.”

Neither the hosts of the play at NYU, nor their financial backers, are anxious to be seen as endorsing “The Siege.” In a statement to JNS.org, Jay Wegman, senior director of the NYU Skirball Center, said the play “does not reflect NYU’s ‘position’ on a political controversy; rather, its staging reflects…the University’s commitment to the freedom of artistic expression.” He noted that an Israeli official involved in the Church of the Nativity negotiations will speak at NYU’s Taub Center for Israel Studies later this month.

The National Endowment for the Arts, which gave Skirball $25,000 last year; the Mid Atlantic Arts Foundation, which contributed $2,900 to two upcoming projects; and the New England Foundation for the Arts, which donated $2,000 this year, emphasized in statements to JNS.org that their contributions were for programs unrelated to “The Siege.”

“In America, you have the right to glorify terrorism, but that doesn’t mean the right should be exercised in every instance, let alone elevated as an art form,” said Amanda Berman, director of legal affairs at The Lawfare Project, a nonprofit legal-focused think tank. “The Skirball Center is magnifying the terrorists’ message, when we should be burying it.”

Another major theater in Manhattan, The Public Theater, last year considered hosting “The Siege” but decided against it. Yet Oskar Eustis, artistic director of The Public Theater, is currently quoted in NYU Skirball’s publicity, calling the play “thoughtful” and “brilliant,” and praising it for showing the terrorists’ “despair and passion, their anger and vulnerability, their arguments and struggle.”

In addition, Eustis will take part in a discussion at NYU Skirball Oct. 16, together with the cast and playwright Tony Kushner, who has characterized Israel’s creation as “a mistake.” Neither Eustis nor The Public Theater’s spokesperson responded when asked by JNS.org if Eustis’s current involvement with “The Siege” conflicts with the theater’s rejection of the play last year.

Several Jewish and Israeli institutions are among the Skirball Center’s past financial supporters, including El Al Airlines, the Consulate General of Israel, and the Judy and Michael Steinhardt Foundation. “I hope they will speak out against Skirball’s decision to host ‘The Siege,’” said the National Council of Young Israel’s Weiss. “They are uniquely positioned to let the Skirball Center know how they feel about this anti-Israel play.”