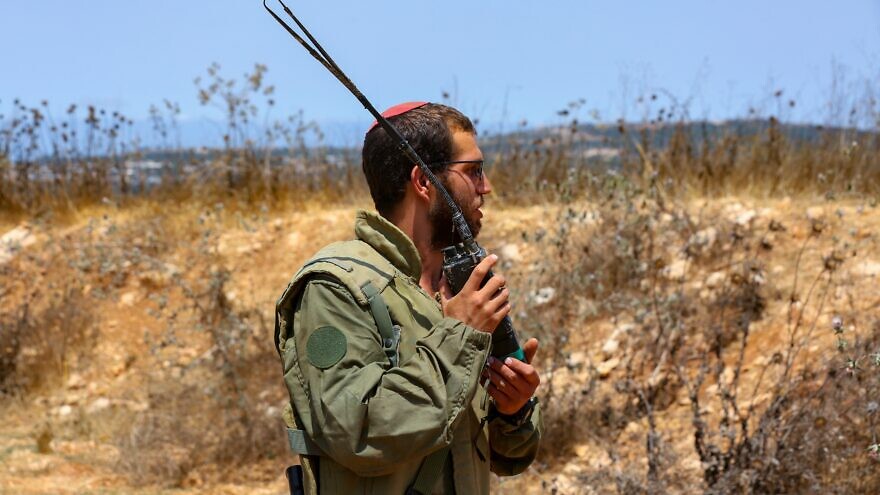 An Israeli soldier at the border between Israel and Lebanon, July 20, 2021. Photo by David Cohen/Flash90.
Spread the word.
Help JNS grow!
Share now:

(July 20, 2021 / JNS) Israel Defense Forces Chief of Staff Lt. Gen. Aviv Kochavi publicly addressed the rocket attacks carried out on northern Israel from Southern Lebanon on Tuesday, stating, “We will respond and attack, in an overt or covert manner, to every violation of sovereignty from Lebanon,” said a report by Maariv.

He noted that Lebanon is in the “process of collapse” while at the same time stressing “Hezbollah has a role to play in this collapse. But we do not intend, as a result of this collapse, to allow this fire that occurred in the early hours.”

Kochavi said Israel would respond to whoever was behind the attack.

The IDF fired artillery shells at southern Lebanon after two Grad rockets were launched at northern Israel early on Tuesday, triggering sirens in the Galilee region.

Iron Dome intercepted one of the rockets. There were no reported injuries or damage in Israel or in Lebanon.

Earlier, Israeli Defense Minister Benny Gantz said that the Jewish state is interested in seeing an economically prosperous and stable Lebanon, adding that the situation in Israel’s northern border is deteriorating and that Hezbollah is operating against the interests of the Lebanese people.