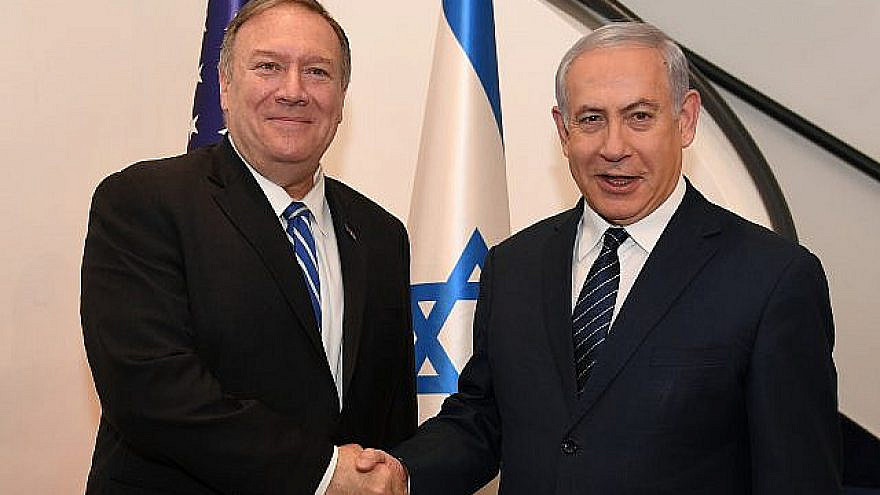 (December 4, 2019 / JNS) Israeli Prime Minister Benjamin Netanyahu on Wednesday called on U.S. Secretary of State Mike Pompeo to make Iran “totter even further” amid the latest protests by the Iranian people against the regime.

Meeting in the Portuguese capital of Lisbon, the Israeli leader praised the U.S. maximum pressure campaign on Tehran and said that it could even be stronger.

“Iran’s aggression is growing, but its empire is tottering. And I say: Let’s make it totter even further,” said Netanyahu said at the start of the meeting with Pompeo.

Regarding the protests, Pompeo said, “Some of these are people that are seeking freedom and a reasonable way to live, and they recognize the threat that is posed by the kleptocrats that are running the Islamic Republic of Iran.”

Additionally, Netanyahu thanked Pompeo for the U.S. State Department’s announcement last month that the United States is softening its stance on Jewish settlements in Judea and Samaria.

It was a reversal of the 1978 State Department legal opinion, known as the Hansell Memorandum, that such neighborhoods are “inconsistent with international law.”

“I think contrary to every common spin this actually advances the cause of peace because peace has to be based on truth and not on lies,” said Netanyahu. “And we are committed to advancing security, prosperity and peace in our region, and I believe this conversation on these and many other subjects will do exactly that. So thank you.”