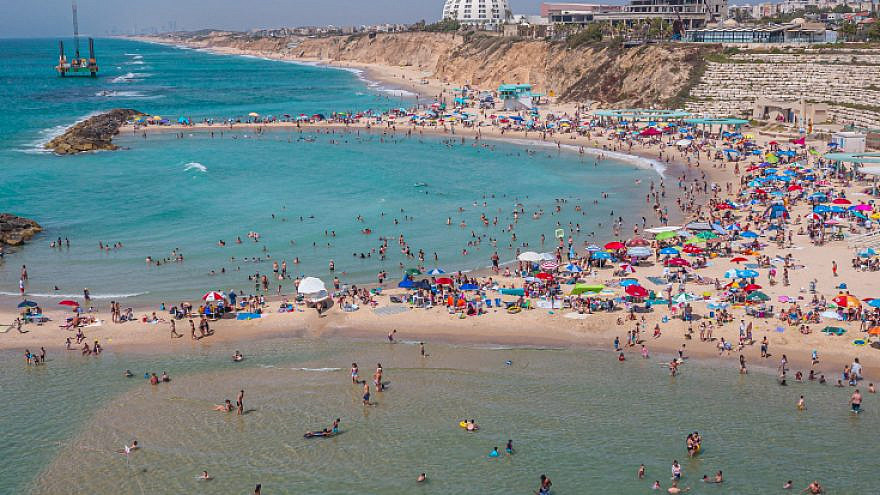 An aerial view of the beach in the southern Israeli coastal city of Ashkelon, on June 1, 2019. Photo by Edi Israel/Flash90.
Republish this article
882 WORDS
Spread the word.
Help JNS grow!
Share now:

(April 21, 2021 / JNS) Much of the public attention surrounding Israel, both within the country and internationally, focuses on the land. Yet the sea plays a significant and unsung role in the development of the state, according to Professor Ilana Berman-Frank, director of the University of Haifa’s Leon H. Charney School of Marine Sciences.

“For many years, Israelis at all levels of society have overlooked the sea as an ecosystem, viewing it as a shipping route, a source for marine resources, a beachside resort or a possible garbage dump,” she says. “Israel’s deep-sea resources were neglected until the discovery of offshore energy sources.”

For this year’s observance of Earth Day on April 22, Berman-Frank expands on the sea’s importance to Israel.

Q: How would you describe the significance of the sea to the development of the State of Israel?

A: The sea has always been important to Israel, yet with different focuses. Historically, the sea has been a gateway to other cultures—and invaders—and the route for mass immigrations at different times.

Due to Israel’s political situation, the sea has often been the only open border and has great geostrategic importance. Moreover, it has always been a source of traditional marine-based foods and fish. In the past and at present, the sea is the predominant route for imports and exports to and from Israel. The country’s very small coastline is under a variety of human-based pressures from industrial, agricultural and other discharges from toxic metals, nutrients, plastics and other pollutants; infrastructure for communications, gas and oil; shipping; tourism; land erosion; and the possibility of building new structures beyond the natural coastline.

The focus on the sea as both a source of essential resources and an environment that should be maintained and conserved as a vital ecosystem is gaining awareness in Israel, although not as much as it should. The Mediterranean is currently becoming the largest source of energy for the country with the move to offshore gas reserves. However, with this comes increasing concern about the possible impact of hydrocarbon-based pollution, especially in view of the recent tar spill off the Israeli coastline.

Most importantly, today the Mediterranean Sea is our primary source of drinking water and an increasingly important food source, not only for fish but also for cheap protein alternatives to terrestrial sources.

Q: Do maritime issues receive the attention they deserve on policy and government levels in Israel?

A: Not enough. The problem is that the maritime domain has only recently been added to national planning and regulatory strategies. The increasing dependence on the Mediterranean as a source for water, energy and food sounded the “alarm” that cutting-edge scientific knowledge and expanded investment in marine sciences is required to guide the responsible development and conservation of marine resources and the eastern Mediterranean Sea. But this has not necessarily been translated fully to policy and regulatory measures.

Another facet that is lacking is that of implementing and funding conservation and protection of marine systems and sensitive areas, or an understanding of how essential it is to maintain a viable marine ecosystem. The lack of governmental involvement at all levels in promoting and sustaining the natural resources and ecosystems in Israel, including aquatic environments, is critically damaging to the ecosystems and their biodiversity.

Q: What do you see as Israel’s greatest environmental challenge?

A: They stem from the demographic forecast of an increasingly large population on a very small piece of land enclosed by political borders that contain the population, but do not contain all the emerging environmental issues that result from a growing population. Some ecosystems may be more resilient, but other sensitive environments may reach a non-viable status and consequently further limit the availability of clean water, air and soil to the inhabitants of this country.

Q: How does the Charney School view its role in terms of helping the entire country thrive?

A: It has aimed from its inception to become a leading academic center of excellence on the eastern Mediterranean Sea based on a multidisciplinary and interdisciplinary approach that is essential to address the challenges of this dynamic marine ecosystem. Our mission is to provide science-based insights facilitating proactive policies and regulation that will enable a sustainable future for the Mediterranean Sea.

We aim to carry out professional scientific research on an international level; to train the next generation of marine scientists, educators and policymakers in Israel; and to lead national, regional and international discourse on topics related to the Mediterranean Sea, and especially, the eastern Mediterranean Sea. For instance, in 2014 and 2015, we held the first two regional symposia in the field of marine sciences, bringing together scientists from Israel, Cyprus, Greece and Egypt.

Q: Why did you choose to pursue a career in marine sciences?

A: The oceans are considered the primary environment where life on Earth developed. They buffer the climate and the impact of global changes. Yet despite its innate importance, the sea is one of the most understudied ecosystems, with more people going into outer space than reaching the deep oceans. I chose to study the ocean because I believe it is essential to understand this environment and its varying ecosystems, and to provide science-based data to be able to forecast and mitigate the impact of the growing human footprint.