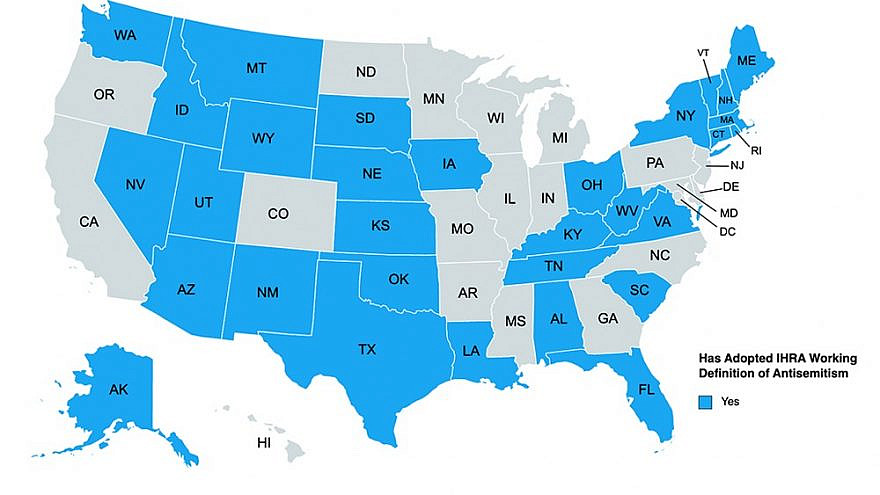 (January 17, 2023 / JNS) As of the new year, a total of 1,116 global entities have adopted the International Holocaust Remembrance Alliance’s Working Definition of Antisemitism. According to the Combat Antisemitism Movement (CAM), this includes 18 U.S. states that adopted the IHRA definition via legislative or executive actions in the course of 2022, bringing the total number to 30.

American cities such as Los Angeles, Washington, D.C., El Paso and Wichita have all adopted the definition, as have seven out of the 10 Canadian provinces (including British Columbia, Manitoba, New Brunswick and Saskatchewan).

The IHRA Working Definition of Antisemitism was adopted in 2016 and has since become the most widely-recognized barometer in the collective effort against Jew-hatred, serving as an essential tool to identify and delineate contemporary manifestations of this age-old bigotry. A diverse array of international organizations, national and local governments and corporations are now using it.

“Support for the IHRA Working Definition of Antisemitism transcends the political and ideological spectrum and unites entities and individuals of a broad swath of religious, national and cultural backgrounds,” said CEO of CAM Sacha Roytman-Dratwa. “The surpassing of the 1,000 milestone since a previous report compiled by the Combat Antisemitism Movement is a telling indicator of the far-reaching impact and influence of the definition and its accompanying 11 explanatory examples of prejudiced and discriminatory behavior against Jews.

“While the rise in antisemitic incidents has been alarming, the tidal wave of global support for the Jewish people is undeniable and greatly encouraging,” Roytman-Dratwa said.

The growing list of entities adopting the Working Definition of Antisemitism includes: 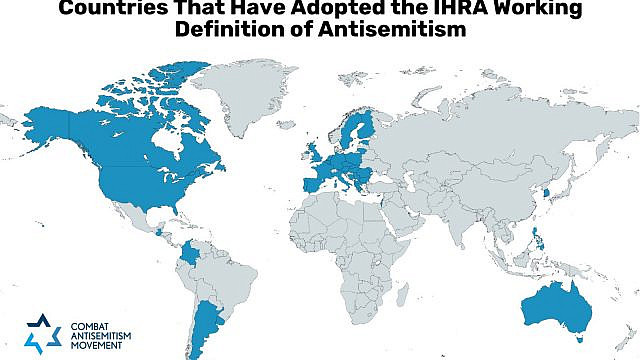 “This significant phenomenon, which has gained momentum in recent years, pinpoints the Working Definition of Antisemitism as a major tool in the contemporary struggle against antisemitism,” said Prof. Dina Porat, a CAM Advisory board member and the Alfred P. Slaner Chair for the Study of Contemporary Antisemitism and Racism at Tel Aviv University. “Its adoption by a host of varied entities reflects a wish to stand up against an old evil and newer ones, as part of a global effort to improve the international arena.”

In December, CAM held a Mayors Summit Against Antisemitism in Athens, Greece, to foster a conversation among more than 50 municipal leaders from around the world, including New York City Mayor Eric Adams, on the most effective ways to deal with antisemitic bigotry and violence.

In a year that began with the hostage situation at a synagogue in Colleyville, Texas, and concluded with the Ye (formerly Kanye West) controversy, major North American cities are following in the footsteps of European capitals such as London, Paris, Berlin and Vienna in adopting the IHRA Working Definition.

The largest category for adoptions and endorsements in 2022 consisted of non-federal government entities, including municipalities, counties, and state and provincial governments, with 58 in total, including 32 in the U.S.

“Local authorities and law enforcement agencies under their jurisdiction have a crucial role to play in confronting antisemitism where it is most directly felt—on the streets of the communities where Jews live their day-to-day lives,” Roytman-Dratwa noted.

The CEO of CAM went on to say that the business sector is an important area with “room for growth” in utilizing the IHRA Working Definition of Antisemitism.

“The fallout from scandals involving celebrities such as Kanye West and Kyrie Irving underscored why companies must have the means to properly identify and react to expressions of antisemitism,” she said. “Both West and Irving lost lucrative endorsement deals with the likes of Adidas and Nike over their antisemitic rhetoric and behavior.

“Meanwhile, the ongoing explosion of online antisemitism, particularly on social media, highlights the need for major platforms to enact stricter policies for the detection, monitoring and removal of hateful content, as well as the banning of purveyors of bigotry like West.”

The Biden administration—which has said it “embraces” the IHRA Working Definition of Antisemitism—announced in December the creation of an inter-agency task force to develop a “national strategy to counter antisemitism.”

CAM is a global coalition engaging more than 600 partner organizations and nearly two million people from a diverse array of religious, political and cultural backgrounds in the common mission of fighting antisemitism. CAM acts collaboratively to build a better future, free of bigotry, for Jews and all humanity.