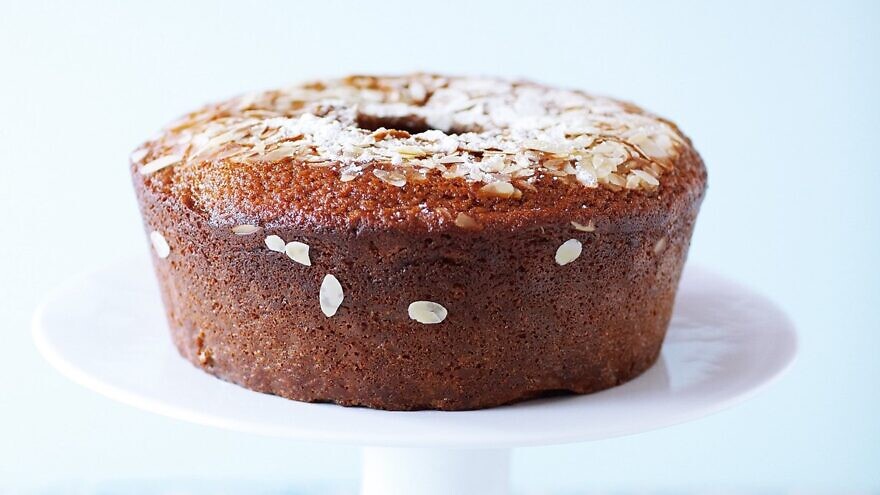 In fact, the dessert is one of the oldest in the world, made by every major civilization since the Ancient Egyptians. It has assumed a multitude of forms, from syrup-soaked nut cakes to multilayered cream confections. It has been loved and hated, endlessly revised and reworked. And yes, it is still worth making.

The first reference to honey cake in history appears in the tomb of Ramesses II: A drawing of a folded cake that historians speculate was made with dates and nuts. Because honey’s high sugar content and acidity make it a natural preservative—honey cake is known to have a long shelf-life—the Egyptians revered it as a symbol of immortality. They carried honey cakes with them into battle and used them as provisions for the next life. The pharaoh didn’t take a recipe with him, however. For that, we have to wait more than 1,000 years.

“Pound pepper, pine nuts, honey, wine, passum and rue.” Thus begins one of the oldest surviving recipes for honey cake, recorded in the Roman cookbook Apicius written in the third or fourth century CE. The cake, which was offered to the gods and consumed at patrician feasts, might not fit a modern definition of dessert, says Crystal King, author of Feast of Sorrow, a historical novel about Marcus Gavius Apicius, the Roman gourmand for whom the cookbook is named. “Honey cakes in history tend to not be that sweet. The name kind of belies what you’re getting.”

King adapted the Apicius cake for her home kitchen. It was a challenge since the original recipe contains no proportions and scant instructions. Her recipe includes the modern addition of baking powder, but everything else is authentic to the time period. “It’s really about the spices and the nuts. Coriander and pepper were spices that the wealthy would use,” she says. If the cake is not sweet enough, King notes, you can follow the common Roman practice of adding additional honey when it’s served.

Spice is a common theme in this type of baking. What we think of today as honey cakes were often called spice cakes, since honey was the default sweetener before the advent of cane sugar, says Marcy Goldman, author of A Treasury of Jewish Holiday Baking. “Honey cakes are unique because different cultures have slight differences—spices, shape, techniques. Honey-centric baking is definitely in its own category.”

In the Middle East, hard cakes made of semolina and nuts are cut into diamond shapes and soaked with a syrup containing honey and flavored with orange water. Sephardic Jews call these cakes tishpishti (derived from the Turkish word for “quick”) and make them with blanched almonds on Rosh Hashanah to usher in a “sweet and bright” year.

But perhaps the most elaborate and popular iteration of honey cake comes from the countries of the former Soviet Union. Medovik, a Russian layer cake made with honey and sweetened sour cream, was purportedly invented by a cook in the household of Tsar Alexander I who was seeking to win over Tsarina Elizabeth Alexeievna, who famously hated honey.

Jewish food writer and cookbook author Joan Nathan doesn’t believe the story. “From the research I’ve done, it developed during Soviet times,” she says, “maybe in Armenia.” While medovik has become popular with restaurants and caterers, Nathan prefers a “homier” Hungarian version that layers gingerbread with jam and a custard-based on cream of wheat.

‘Our tastes winnowed down’

The rise of cane sugar in the early 17th century made honey into an “old-fashioned” sweetener, and spices—which had once signaled wealth and prestige—became more widely available and less precious. “It seems these days we’re still fond of vanilla and cinnamon but a little less enamored with cloves, allspice, cardamon and nutmeg. Our tastes winnowed down,” Goldman says. As European bakers turned increasingly toward sponge and butter cakes, honey cake fell out of favor.

It never disappeared, however. Lekach, the dark, spiced honey cake of medieval Germany and France, earned a permanent place in Jewish tradition as the food that celebrates a child’s initiation into Jewish schooling. It was once served at circumcisions, bar mitzvahs and weddings, and though today its role has narrowed to a once-a-year appearance on Rosh Hashanah, Goldman says preserving this particular tradition need not be a punishment. Her recipe, which is considered a classic, includes orange juice, coffee and liquor, producing a rich, moist cake. To give the traditional flavor extra umph, she recommends stocking up on fresh spices before the holidays.

In the two decades since its publication, Goldman has continued to tweak the recipe and try new things (she currently favors light honeys like orange blossom and clover, and uses ginger ale in place of orange juice). It’s a time-honored practice of bringing the past into the present, making the foods of our ancestors delicious for us as well. “It was a honey cake for honey-cake haters,” she says, “but in the end, even I fell in love with it myself.” 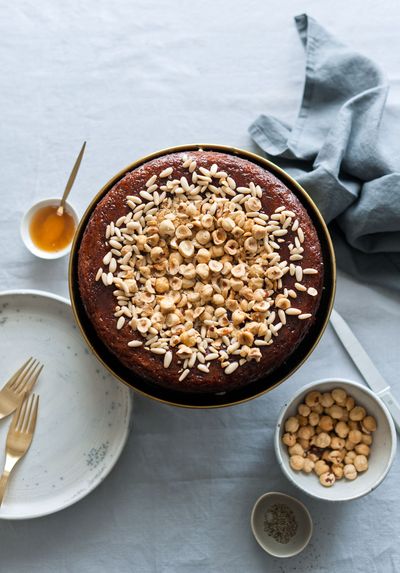 Place a rack in the middle of the oven; heat to 177 degrees Celsius/350 degrees Fahrenheit. Grease and flour a 9” cake pan. For ease of removal, you can also add parchment paper to the bottom of the pan, but make sure to grease and flour the sides.

In another large bowl, whisk 2 eggs and 1 egg yolk well. Whisk in oil, 1 cup of honey, and the wine until well combined.

Whisk in dry ingredients until smooth. Mix in the pine nuts and almonds.

Pour batter into pan and bake until springy to the touch and a cake tester comes out clean, 45 to 50 minutes. Transfer pan to a wire rack to cool. Let rest for 20 minutes. Unmold the cake. Heat 5 tbsp of honey, mix with roasted hazelnuts and drizzle it over the cake. Let cool completely before serving.

This cake is best eaten the same day but will keep, if covered, at room temperature for up to two days. If more sweetness is desired, drizzle a little more honey on each slice before eating.

From A Treasury of Jewish Holiday Baking by Marcy Goldman

Line the bottom and sides of a 10-inch angel food cake pan with lightly greased parchment paper, cut to fit. Stack two baking sheets together and line the top one with parchment paper. Place cake pan on it (this prevents the bottom from browning too quickly).

In a large bowl or large food processor, blend together the flour, baking powder, baking soda, salt, cinnamon, cloves and allspice. Make a well in the center, and add oil, honey, white sugar, brown sugars, eggs, vanilla, coffee, orange juice and rye or whisky. Blend well, making sure that no ingredients are stuck to the bottom. This is a thin batter.

Bake until cake tests done—that is, it springs back when you gently touch the cake center, about 55 to 65 minutes. If the cake seems done but still seems a bit wobbly in the center, lower the oven temperature and give it 10–20 more minutes. This is very important: give the cake the amount of baking it needs.

Let the cake stand for 15 minutes before removing it from the pan.

*If you prefer not to use whisky, replace it with orange juice or coffee.