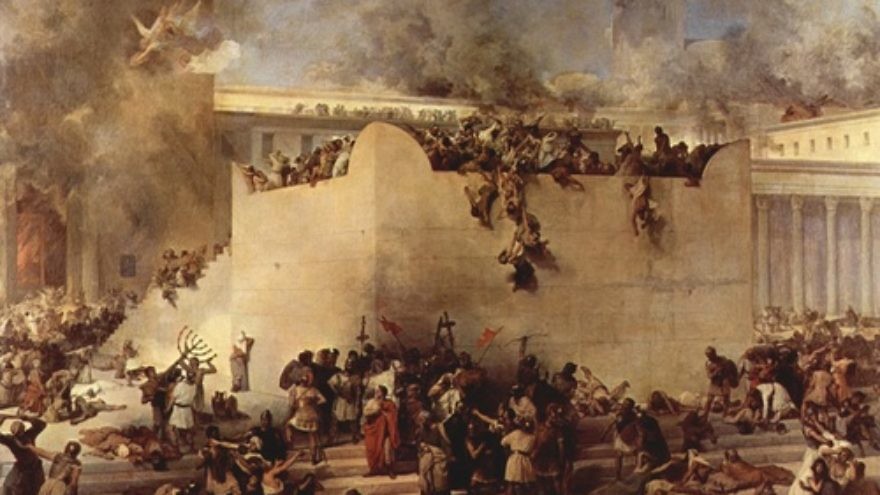 The destruction of the Temple of Jerusalem, oil on canvas, by Francesco Hayez. Both the first and second iterations of the “Beit HaMikdash” were razed on Tisha B’Av, hundreds of years apart. Credit: Francesco Hayez.
Republish this article
786 WORDS
Spread the word.
Help JNS grow!
Share now:

(June 17, 2013 / JNS) It is a testament to the amazing variability of Jewish synagogue life in America that the summertime fast of Tisha B’Av is for some a time of momentous communal mourning, and for others a normal and unremarkable day. In contrast to Yom Kippur, which sees widespread observance in one fashion or another across the denominational spectrum, Tisha B’Av and its ritual restrictions (which are nearly identical to those of Yom Kippur) are unfamiliar to a sizable contingent of American Jews.

A bit of anecdotal evidence: This author recently worked as the Judaics director for a summer camp affiliated with the JCC movement and was asked to put together a brief Tisha B’Av ceremony, something this particular camp had never before included in its Jewish programming. The campers were so incredulous about the existence of this holy day that many were whispering to each other that it had been invented by the camp staff as a color war breakout prank.

How could Tisha B’av, traditionally one of the most intense and salient religious experiences of the year, be wholly foreign to a large portion of American Jewry? Surely it cannot simply come down to the fact that most people are averse to fasting—if that were the case, how could we explain the ongoing popularity of Yom Kippur?

The actual answer revolves around the traditional thematic elements of the fast. The narrative of Tisha B’Av centers on the destruction of the holy temple in Jerusalem, a national calamity that marked the end of Jewish sovereignty in ancient Israel and the official onset of the long Jewish diaspora. The day’s liturgy mourns the disappearance of high priests and animal sacrifices, and woven into its eulogizing is the wish for a return to these original forms or worship.

It is in reaction to these sentiments that the modern Jewish thinkers have diverged on how Tisha B’Av ought to be approached in the present. Unlike Yom Kippur, whose themes of repentance and forgiveness are timelessly compelling, Tisha B’Av as traditionally observed openly longs for a way of religious life that has irrevocably passed and that even the most fervently Orthodox today would find alien. Understandably, those movements and individuals in recent history that have championed Judaism’s ability to evolve and adapt would not be interested in the message of Tisha B’v—that what is old is best.

This was the feeling that guided early leaders of the Reform movement in the 18th century to do away with the observance of Tisha B’Av. Since they were interested in making Judaism appealing to a modern, scientific milieu, the reformers emphasized the ethical elements of Jewish teaching and minimized ritual law. The transition from sacrificial worship to verbal prayer brought on by the destruction of the temple was not seen not so much as a tragedy, but as an important step in the development of Judaism toward pure ethical monotheism.

American Jews’ lack of familiarity with Tisha B’Av can likely be traced back to that early decision. The Reform movement is the largest denomination among American Jewry today, and there are a significant number of Reform temples across the country that do not mark Tisha B’Av on their calendars.

But in the last several decades, more and more Reform rabbis and communities have begun reintroducing some kind of Tisha B’Av observance into their annual schedule. In an interview with the Jewish Chronicle in 2011, Rabbi Lawrence Hoffman, the Barbara and Stephen Friedman Professor of Liturgy, Worship and Ritual at Hebrew Union College-Jewish Institute of Religion in New York, attributed the shift to two causes. First, he attributed this to the Holocaust and the subsequent founding of the state of Israel, events that brought the experience of national tragedy and a strong sense of unified peoplehood into the modern Jewish experience.

Interestingly, the second development Hoffman identified was the growth of Jewish camps. As the anecdote above illustrates, Tisha B’Av’s placement during the summer months made it a natural choice for inclusion within the Jewish educational programming at Reform Jewish camps. Rather than focus on the destruction of the temple, Hoffman explains, educators taught their campers about the Holocaust and other tragic events from throughout Jewish history. Moved by the experience, young people brought the observance of Tisha B’Av back to their home communities.

Despite these changes, Hoffman aptly described the current attitude of the Reform movement toward Tisha B’Av as “ambivalent.” Like those skeptical campers, many American Jews are still just finding out about Tisha B’Av for the first time.