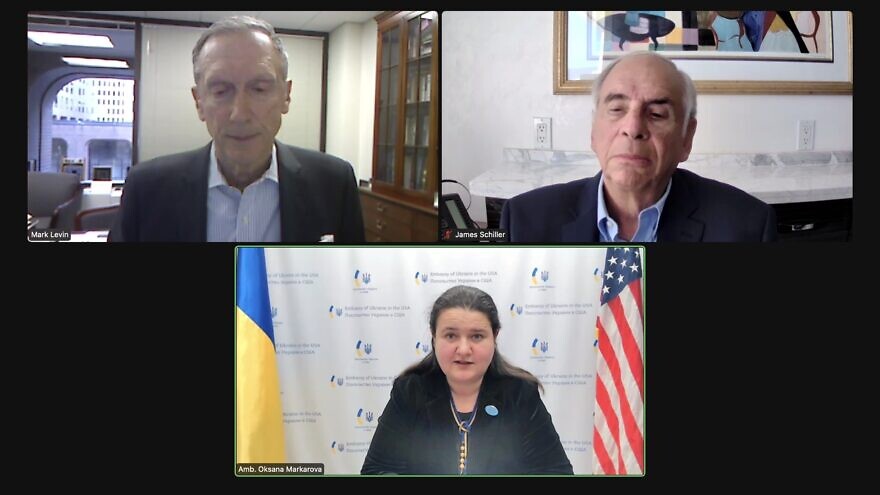 (February 25, 2022 / JNS) As Russian military forces bore down on Ukraine’s capital city of Kyiv on Friday, Ukrainian Ambassador to the United States Oksana Markarova spoke to over a hundred supporters and leadership of the National Coalition Supporting Eurasian Jewry (NCSEJ) on Friday, calling for stronger sanctions and military aid to help Ukrainians repel the invasion.

Markarova said that Ukraine has been defending every inch of Ukrainian territory and people for the past 30 hours and day-to-day life has been disrupted in Ukraine with many casualties.

But she said that she is proud to say that the Ukrainian people are resisting, including their armed forces, veterans, police, border guards, reserves and volunteers.

Ukrainian President Volodymyr Zelensky on Thursday announced overall mobilization, allowing everyone from ages of 18 to 60 to volunteer to defend the country.

While the Russians have not been able to quickly accomplish their goal of capturing Kyiv due to the resistance from Ukrainian forces, Markarova said many airports, roads and hospitals have been destroyed.

“The only scarce resources that we have right now are weapons and ammunition,” Markarova said, adding that there are lines of volunteers in every Ukranian city.

“Of course, we do realize that even though we are one of the largest countries in Europe, that we are not a match—in terms of weapons—for the country that is attacking us,” she said.

Markarova said that there is a reason for Ukrainians not to lose hope but that Ukraine has a reason to be very direct and open about what support it needs.

She said her country is in need of weapons—anything that could be provided—including Stinger and Javelin missiles.

“It would be very important to support our army and help our army to sustain their defense activities,” she said. “And it works, because the more damage at this point—and I’m sorry to say that as a peace-loving person—but the more damage we inflict on the enemy, the faster they will be able to talk to us.”

She also called for more sanctions on Russia and said that those applied by the Biden administration and European allies are not enough.

‘We will resist until the victory’

The last important component is aid. While she said Ukraine still has enough food, there is a shortage of medical supplies as there are no flights coming in and out of the country. The Ukrainian government is currently working through USAID and other governmental institutions to get those supplies through neighboring countries.

Markarova said that nobody will forget or forgive Russia for this.

Levin said that the NCSEJ is working with its partner agencies to address the humanitarian crisis, as well as issuing a statement condemning the attack on Thursday.

Levin asked Markarova to address the statements being made by Russian President Vladimir Putin’s justification for the invasion to de-Nazify the Ukrainian leadership.

Markarova said that the allegation that neo-Nazis control Ukraine is the most appalling thing that Putin has said.

Markarova spoke of Ukrainians fighting the Nazis during World War II and that the country is high on the list of countries with righteous gentiles during the Holocaust. She said that Ukraine is one of the few countries where anti-Semitism is a crime and has adopted the IHRA definition of anti-Semitism. It is also one of the few nations to have elected a Jew as a head of state.

“Whatever Mr. Putin wants to call us, is not only completely false and untrue, but it just tells us how cynical he is,” she said.