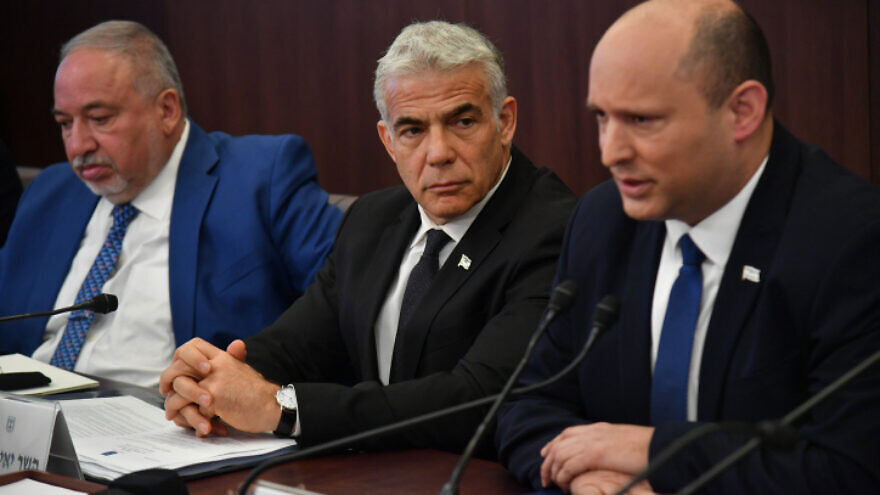 (June 27, 2022 / JNS) Events have been moving swiftly since Israeli Prime Minister Naftali Bennett and Foreign Minister Yair Lapid announced on June 20 their intention to dismantle the government. Two days later, the Knesset voted by a margin of 110 to zero to approve in preliminary reading a bill to disperse itself. By all accounts, the coalition government will likely come to an end this week.

What does this mean for Israel in the coming months?

The government’s dissolution bill went to the Knesset Committee on Monday morning. Most observers expect the Knesset to pass it on Tuesday or Wednesday, despite Likud Party leader Benjamin Netanyahu’s efforts to form a government before that happens. Given the tight time frame and no clear constellation of forces in his favor, the likelihood of his success has been described as “weak” to “infinitesimal.”

That means that a caretaker government, led by Lapid, will take over. While his freedom of action will be constrained as legislation is essentially frozen in place, his influence will nevertheless be considerable, Ilana Shpaizman of the department of political studies at Bar-Ilan University told JNS.

“Lapid is going to have a lot of power,” said Shpaizman. “He’s going to manage this country for at least six months, and perhaps even longer.”

It has been floated in the Hebrew media that there are concerns Lapid could reverse Israel’s policy on the Iran deal, and according to Shpaizman there will be much he can do on this front, despite his constraints.

“In terms of the Iran deal, there’s no limitation on Lapid, because Israel isn’t a formal party to the deal and [will not be] signing the agreement itself. He can travel abroad to convince the United States, the European Union, and so on. He’s limited only in procedural things, like legislation, budgets and nominations,” explained Shpaizman.

However, Jonathan Schanzer, senior vice president of research at the Washington, D.C.-based Foundation for Defense of Democracies, told JNS that he doesn’t believe Lapid will flip on Iran.

“Lapid is often maligned as a lefty by the Israeli right, but his position isn’t soft on Iran,” he said.

When Lapid was foreign minister and the No. 2 man in the coalition, his job was to maintain good ties with the United States, “full stop,” said Schanzer. “But I think as prime minister he will have to hold the line on Iran. So I wouldn’t be surprised to see him pivot toward a more hardline position relative to where he was before, when his job was to present Israel in the best light, primarily to the United States.”

The United States, too, now finds itself subject to limitations, he noted. “Most people are focused on the restrictions of the sitting government in Israel, but there are also the restrictions in the White House—self-imposed, but restrictions nonetheless,” he said.

“[President Joe] Biden was looking to visit Israel and then visit Saudi Arabia. It was going to be a very presidential visit, with foreign policy achievements, possibly even steps toward normalization between Saudi Arabia and Israel,” said Schanzer.

While American limitations are self-imposed, Israel’s are more concrete, imposed by its legal system. As a result, there will be a flurry of activity in the next few days. Bennett alluded to it at the start of the weekly Cabinet meeting on Sunday: “Soon, unfortunately, the State of Israel will head toward elections, during which certain government actions will not be possible. Therefore, I ask that all ministers, in the days and hours that are left, clear their desks in order to expedite carrying out what may be done before the dissolution of the Knesset.”

According to Shpaizman, the Knesset will indeed be working overtime in the coming days.

“If you look at the Cabinet meeting this week, you’ll see that it’s very busy, three times more than usual, because they’re trying to push through a lot of nominations and programs—things that they cannot do once they become a caretaker government,” Shpaizman said.