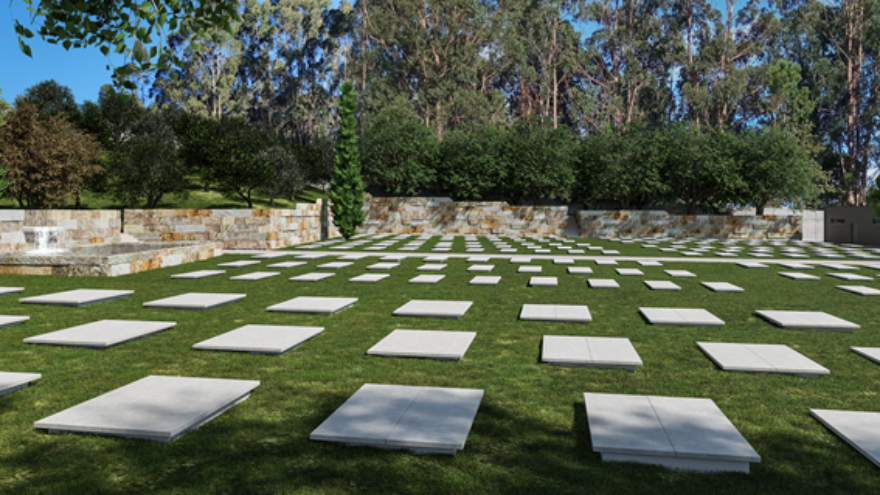 (February 2, 2022, Oporto, Portugal, JNS Wire) Its name is Campo da Igualdade Isaac Aboab, or the Isaac Aboab Field of Equality. It is set in a quiet location on the outskirts of the city of Oporto. There are no high-rise buildings, no streets, no traffic lights, no sound of cars passing or people’s loud and constant chatter. It is as peaceful as it can possibly be. There are trees, grass, a lake, the chirping of carefree birds. And silence.

Oporto’s Chief Rabbi Daniel Litvak says, “It would be impossible in Oporto to build a private cemetery in a quiet, discreet location. The few available spaces are inside municipal cemeteries and it would be unfeasible to purchase and fence off such areas. Having considered the limitations, the Jewish community of Oporto decided to buy land outside the city.”

To avoid acts of vandalism the Jewish community of Oporto does not publicly reveal the address of the cemetery. The space is surrounded by a very high wall, there is an armed guard and it is equipped with surveillance cameras. However, the community knows that the graffiti is done by people in hoodies who live on the margins of society and usually make a quick getaway after carrying out their crimes.

The new cemetery has about 300 individual graves as well as family vaults and the final details of the purification house are being completed. The Chevra Kadisha of the community is a professional London team headed by Rabbi Assaf Portal, who is also a member of the Jewish community of Oporto. Members of the team include volunteers from Golders Green, an Orthodox neighborhood of London, who will travel at once to Oporto when someone dies.

Rabbi Portal told the Portuguese Jewish News that the cemetery “is a sign of Jewish life. Before, the Jews of Oporto were robbed of all their assets, houses, even their cemetery was destroyed. The new cemetery of the Jewish community is proof that the Jews always regenerate, even in the most unexpected places.”

Five Sephardic Jews — Elad Dror, Nir Shalom, Eyal Sheni, Segev Danino and Eli Omer — are honorary members of the Jewish cemetery of Oporto. The families of these men fled Portugal a long time ago and today they have returned to develop and enrich this country with their wisdom, wealth and talent. Life.

Republish this article
About The Publishers
Portuguese Jewish News
The Portuguese Jewish News is a newspaper of the Jewish community for the Jewish community, sharing news, reportage, opinions and reviews regarding the Jewish community in Portugal, Europe and the world. Given Jewish history in Europe and the rise of antisemitism in its many forms, Jewish institutions, persons and communities must not be unnecessarily, dangerously or discourteously exposed on the internet. The project is operated on a voluntary basis, with no effective beneficiaries, independent of political and economic power, fully respecting the legislation applicable.
Publish your organization's press release on JNS Wire
Releases published on the JNS Wire are communicated and paid for by third parties. Jewish News Syndicate, and any of its distribution partners, take zero responsibility for the accuracy of any content published in any press release. All the statements, opinions, figures in text or multimedia including photos or videos included in each release are presented solely by the sponsoring organization, and in no way reflect the views or recommendation of Jewish News Syndicate or any of its partners. If you believe any of the content in a release published on JNS Wire is offensive or abusive, please report a release.