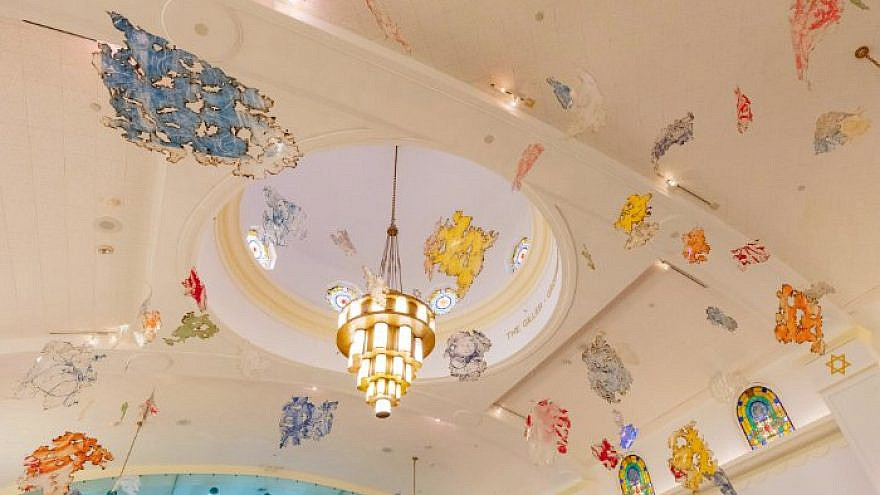 Aerial view of 'Sacred Dreams' by Mira Lehr (detail), 183 aerial sculptures descending from the ceiling of the museum. The large-scale installation was donated by Dr. Robert B. Feldman to the Jewish Museum of Florida-FIU. Photo by Michael E. Fryd (2020). Burned and dyed Japanese paper, acrylic, ink, and resin.
Spread the word.
Help JNS grow!
Share now:

(March 18, 2021, JNS Wire) Dr. Robert B. Feldman, the New York-based art collector, has promised this large-scale installation by Mira Lehr as a gift to the Jewish Museum of Florida-FIU.

The artwork, titled Sacred Dreams, is comprised of 183 aerial sculptures that descend from the ceiling of the museum, and is estimated at a value of $300,000.

The installation is currently on view at the museum as a temporary loan from Dr. Feldman, and will become part of the museum’s permanent collection in September.

The museum is centrally located in South Beach, in the heart of Miami Art Week and Art Basel Miami Beach. Dr. Feldman previously lived in Florida, and was known for having “one of the most important collections of contemporary art in Florida.”

The 183 aerial sculptures are made of burned and dyed Japanese paper, acrylic, ink, and resin.

“I am honored to donate this major work by Mira Lehr to the Jewish Museum of Florida-FIU,” said Dr. Robert B. Feldman.

“This large-scale work now has a permanent home in the community for all to enjoy, including the millions of tourists that visit Miami Beach, at this beloved gem of a museum that is of historic importance in the Southeast.”

The museum is on the National Register of Historic Places, and is the only museum dedicated to telling the story of more than 250 years of Florida Jewish history, art and culture with a growing collection of more than 100,000 items.

“We are very grateful to Dr. Robert B. Feldman for this donation to the museum,” said Susan Gladstone Pasternack, the Executive Director of the Jewish Museum of Florida-FIU. “Mira Lehr created this stunning installation, Sacred Dreams, specifically with the museum in mind as a result of a personal visit here.

After Lehr spent time at the museum, she reflected upon the emotions and inspiration she felt and created these 183 aerial sculptures to interact with the light they create together with our stained-glass windows. The result is truly magnificent.”

Nationally renowned as an eco-feminist artist, Lehr is celebrated for working with imagery from the natural world, creating layered abstract compositions with unconventional materials. The 60 Minutes television correspondent Morley Safer referred to her as “the mistress of light.”

Sacred Dreams by Mira Lehr showcases the artist’s six decades of art making on Miami Beach. The lush flora of her Miami Beach home (where Lehr grew up in the 1940s) has a profound influence on her aesthetic vocabulary. 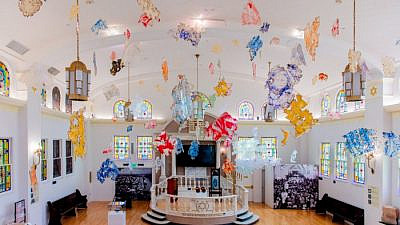 Aerial view of ‘Sacred Dreams’ by Mira Lehr (detail), 183 aerial sculptures descending from the ceiling of the museum. The large-scale installation was donated by Dr. Robert B. Feldman to the Jewish Museum of Florida-FIU. Photo by Michael E. Fryd (2020). Burned and dyed Japanese paper, acrylic, ink, and resin.

“I want viewers to feel like they are walking beneath an aerial garden of luminous, reflecting sculptures,” said Mira Lehr. “A holy garden of Light, that takes people out of the actual world and transports them onto a spiritual plane,” adds Lehr.

In 1960, Lehr co-founded in Miami Beach one of the country’s first co-ops for women artists. It was called Continuum and thrived for more than 30 years, blazing a pioneer trail that helped establish Miami’s evolution as an art destination.

She is known in the art world as “the Godmother of Miami’s art scene” and has mentored many artists through the years.

The Jewish Museum of Florida-FIU is housed in two restored historic buildings that were once synagogues for Miami Beach’s first Jewish congregation. The original synagogue was built in 1929, and the second, built in 1936, was designed by Art Deco architect Henry Hohauser and features 80 stained-glass windows, a copper dome, and a marble bimah.

While reflective of the Jewish experience in Florida, the museum creates understanding of the shared immigrant experience in our multicultural society.

Mira Lehr’s solo and group exhibitions number more than 300. She is a graduate of Vassar College (1956) with a degree in Art History, under the mentorship of Linda Nochlin, the renowned feminist art historian.

Her work is in the private collections of Elie and Marion Wiesel, Jane and Morley Safer, and the artist Judy Pfaff, among others. Lehr is included in the prestigious Leonard Lauder Corporate Collection in New York.

Thirty of her paintings were commissioned for the permanent collection of Mount Sinai Hospital. Her work can be seen in American Embassies around the world and is permanently on view in the lobby of the Evelyn Lauder Breast Center of the Sloan Kettering Memorial Center.

Republish this article
About The Publishers
Jewish Museum of Florida-FIU
Publish your organization's press release on JNS Wire
Releases published on the JNS Wire are communicated and paid for by third parties. Jewish News Syndicate, and any of its distribution partners, take zero responsibility for the accuracy of any content published in any press release. All the statements, opinions, figures in text or multimedia including photos or videos included in each release are presented solely by the sponsoring organization, and in no way reflect the views or recommendation of Jewish News Syndicate or any of its partners. If you believe any of the content in a release published on JNS Wire is offensive or abusive, please report a release.