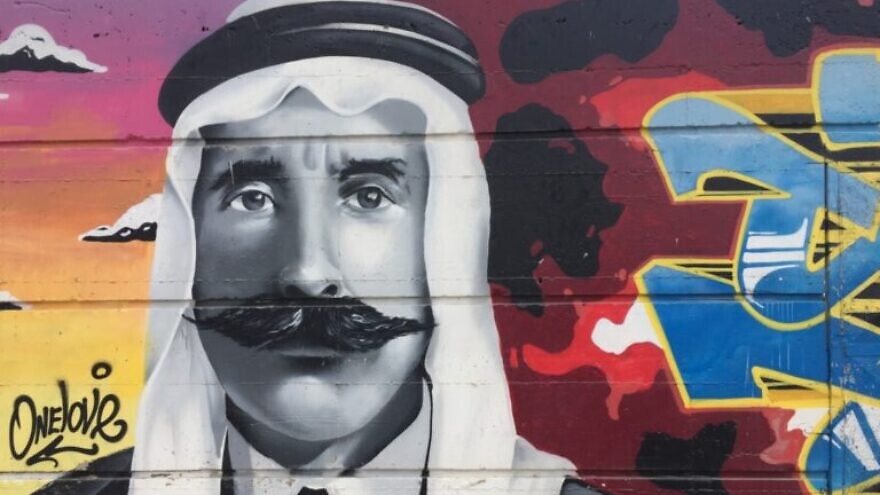 (July 24, 2022 / Israel21c) The aroma of cardamom coffee wafts out of a spice shop. Teenage girls are walking home from school, some in jeans and Blundstone boots, others wearing traditional veils and skirts. A cell phone store stands near a shop selling wooden molds for traditional pastries, and there’s hip graffiti on a nearby wall.

The Druze town of Daliat el-Carmel (also spelled Daliyat al-Carmel) is what its deputy mayor, Nisim Abu Hamad, calls “a mixture of modernity based on our Druze culture and tradition.”

On one end of the town is a large Druze flag with its star and five colors; the other end has a sign with the hashtag #Daliyatelcarmel.

Mixing the new with the old gives this Israeli Druze town its own brand. 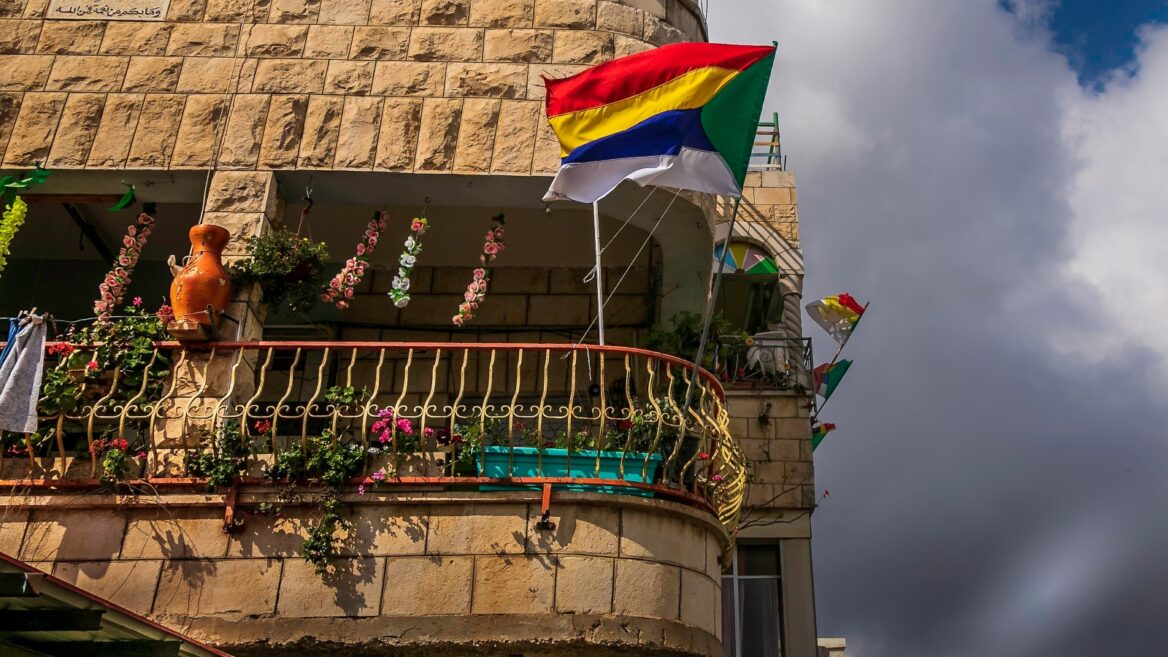 Daliat el-Carmel started as a small settlement on a hill in the Carmel Forest. In fact, riding up the winding road through the forest one encounters makeshift kiosks selling large, paper-thin Druze pita, olive oil and other Druze specialties.

That gives the town a pastoral feel but, said Abu Hamad, “it will soon be registered as a city, with our population of 18,000 people, mostly Druze.”

The soon-to-be city has also embarked on a renewal project, he said, to improve residents’ quality of life, education, culture and health, as well as the city’s infrastructure.

Every Saturday, Daliat el-Carmel is packed with visitors to its outdoor market, that stretches along the main street. During the week it isn’t as crowded, but is just as charming.

People come to visit art galleries and stores and sample the cuisine. El Balad, in the heart of downtown, is known for its knafeh, an angel-hair pastry made with akawi cheese (originally named after the city of Akko) topped with crushed pistachio nuts and sprinkled with rosewater. There are also excellent hummus and shawarma restaurants. 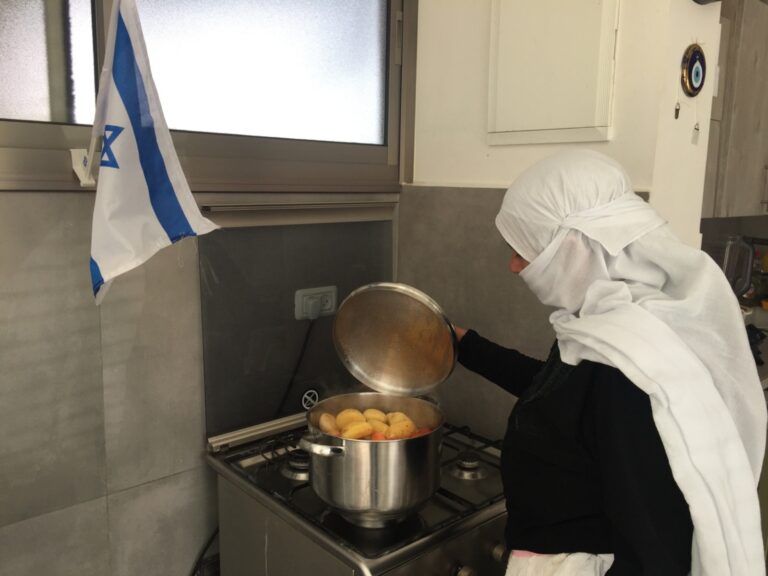 Miyseh Halabi cooking in her kitchen in Daliat el-Carmel. Photo by Diana Bletter.

Nasreen Halabi, director of business development in Daliat el-Carmel, accompanied me on a walking tour along with Rabie Husese, municipal director of strategic planning.

During our walk, Husese said, “We’re trying to be ‘glocal.’ That means we want to attract people globally while helping people locally.”

The most successful Druze community in the world

The Druze number about one million worldwide. Their religion is a monotheistic offshoot of Islam, but Druze do not consider themselves Muslim.

There are approximately 143,000 Druze in Israel. Majd Halabi, chief of staff at City Hall, said, “The Druze in Israel are the most successful Druze group in the world.” They are loyal Israeli citizens, usually choosing to do military service. 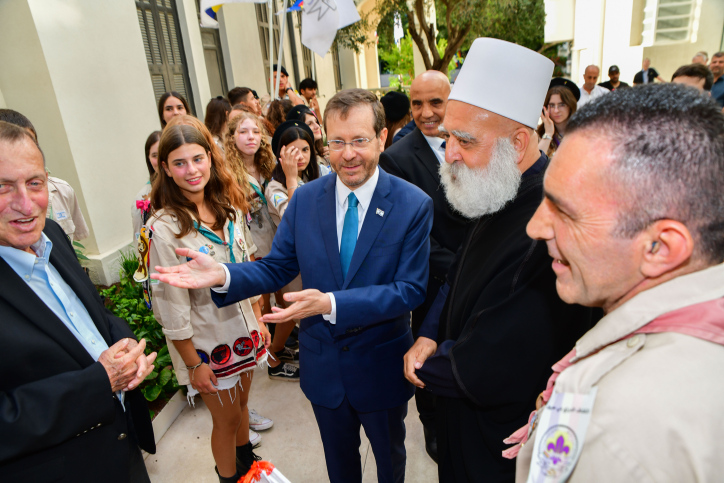 Israeli President Isaac Herzog at a salute ceremony for the Druze community in Israel, in Jaffa, June 12, 2022. Photo by Avshalom Sassoni/Flash90.

The municipality is working hard to attract as many visitors as possible to Daliat el-Carmel. Last March, 1,500 runners participated in an inaugural half-marathon through the city.

Beginning in January, then in the spring and fall, there are festivals that include performances, music and art exhibits.

Visitors don’t have to look hard to reach the studio of local artist Sam Halabi; they simply follow the sidewalk decorated with squares of different colors to reach the shop window, splashed with Halabi’s signature colors.

Halabi has a global reach. His art draws visitors. His story draws listeners. 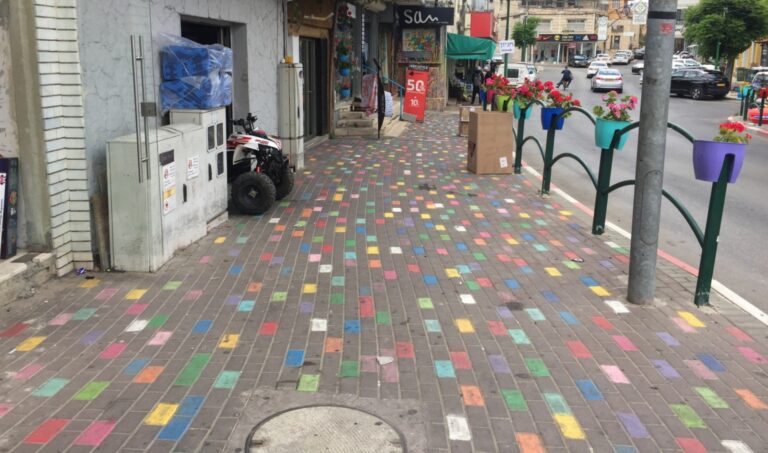 “I was born after nine girls,” he says. “My parents didn’t stop until they got a son.”

From the age of five, he loved art.

“My mother used to send me to the local market when I was very little and I’d look at the designs on women’s traditional white Druze head scarves,” he recounted. “I’d come home and draw the designs and then she would sew them on her Singer sewing machine.”

He has saved some of her embroidered scarves to use in one of his next art projects. 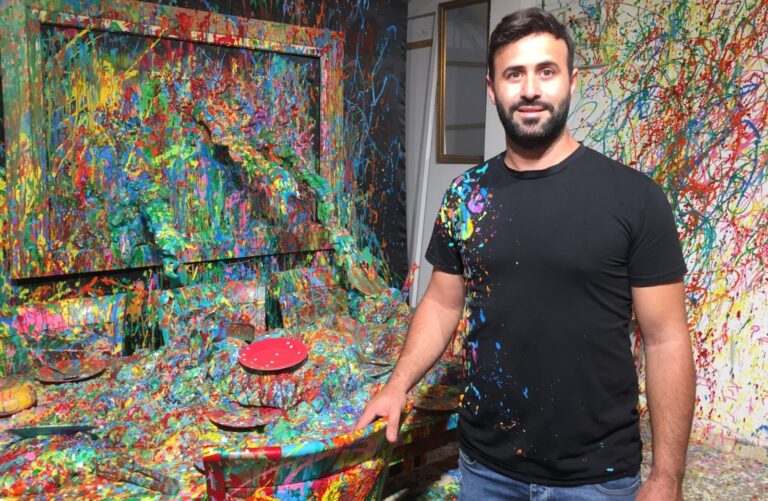 “When you’re a child, you see everything with vibrant colors,” he said, explaining why his art is so colorful.

In one part of the studio, Halabi has a display of the dining room table, set for four, from his childhood home. Everything is drenched in paint, giving one the impression of Mrs. Havisham’s house in the novel Great Expectations, but instead of cobwebs, there are brilliant splashes of color. 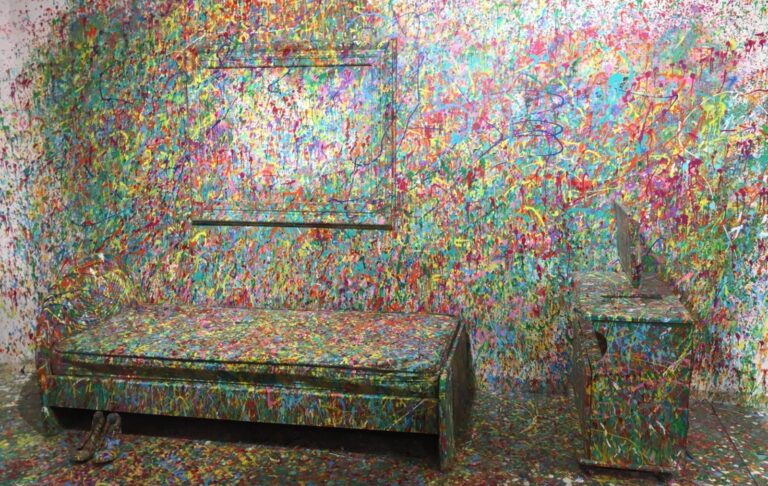 Proud of their heritage

On Sheikh Amin Triff Street, also in the heart of town, is Barawiz Gallery, where you’ll find paintings by Manar Khalifeh.

“I paint in acrylic and also in watercolors, and I paint sketches with my left hand even though I am not left-handed,” Khalifeh said.

She explained that she wants to “create a connection between me and the viewer without me being present,” adding that her artwork is a way to express “my identity as a Druze woman.” 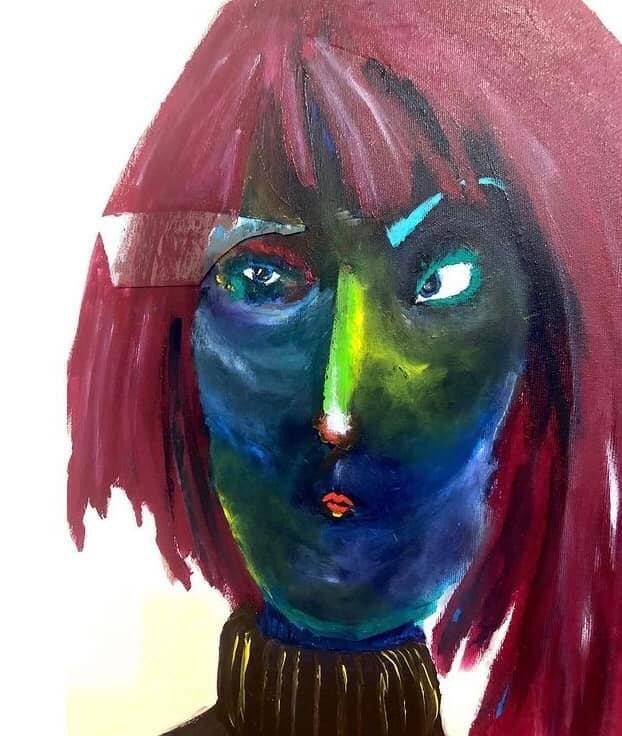 Other artists with studios along the streets include Fadi Hamoudi, who takes photos of galaxies, and Ghadeer Malak, who does black-and-white drawings. There are also stores selling traditional Druze crafts.

“We’re not looking to go back in time,” said Majd Halabi at City Hall. “We can’t go back. We want to move ahead.”

Everyone I met was proud of their heritage—and their city.

“I love it here and I support anything that will help advance it,” Nasreen Halabi said. “And we also need to help the next generation.”

I asked Miyseh Halabi, who caters weddings and events in Daliat el-Carmel, if she could cook for people in other places. “No, I’m too busy here. There’s always something going on,” she replied.

Further information on Daliyat al-Carmel can be found here.