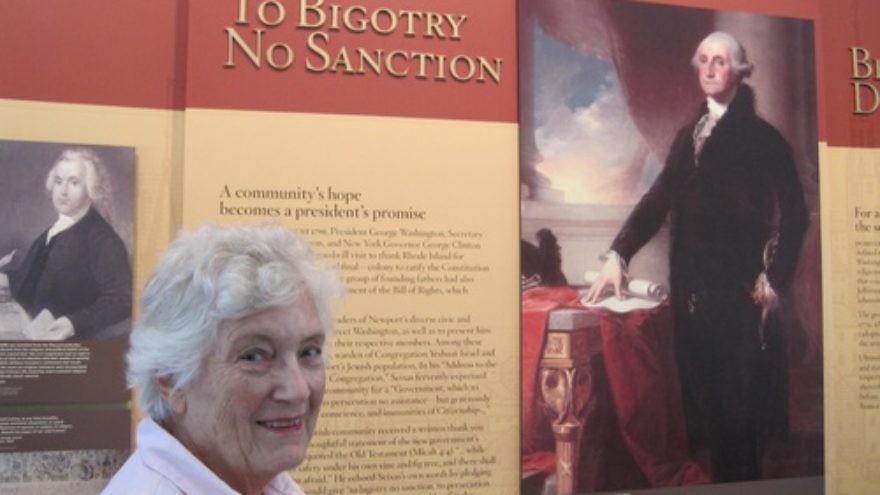 Rita Eisenberg Slom—a Newport, R.I., native who served as president of the historic Touro Synagogue from 1999-2001—is pictured in the Ambassador John L. Loeb Jr. Visitors Center next to a poster of the famous letter President George Washington addressed “To the Hebrew Congregation in Newport Rhode Island,” which is read annually at Touro Synagogue. Credit: Paul Foer.
Republish this article
1203 WORDS
Spread the word.
Help JNS grow!
Share now:

NEWPORT, R.I.—It is best known as one of America’s most celebrated and picturesque seaside towns, a summer playground for the rich, a major yachting destination, and home to famed eponymous jazz and folk festivals. But Newport, R.I., is also one of America’s most historically important places of Jewish interest and history.

Newport’s importance stems not just from the 1763 Touro Synagogue, the oldest-standing synagogue in the United States and a designated national historic site, but also from the Ambassador John L. Loeb Jr. Visitors Center next to the synagogue, which tells the story of Touro and of religious tolerance. In May 2013, a 132-page book “A Genesis of Religious Freedom: The Story of the Jews of Newport, RI and Touro Synagogue,” by Melvin Urofsky, was published by the George Washington Institute for Religious Freedom.

“Even those who do not belong to Touro Synagogue appreciate the history and the beauty of the synagogue and the community,” Rita Eisenberg Slom, a Newport native who served as president of the synagogue from 1999-2001, tells JNS.org. “We get many tourists who come just to pray at Touro. For them to get an aliyah [to the Torah] here is very special.”

Last August, Supreme Court Justice Elena Kagan was the keynote speaker at an event celebrating the synagogue’s 250th anniversary. That coincided with Touro Synagogue’s 66th annual reading of the letter President George Washington addressed “To the Hebrew Congregation in Newport Rhode Island,” when the state formally adopted the U.S. Constitution in 1790. The president eloquently proclaimed in the letter, drafted by Hazan Moses Seixas, that the new government of the United States “gives to bigotry no sanction, to persecution no assistance.”

Sephardic Jews first arrived in Newport in 1658 (though another account says 1677), when Jewish families came to America from Barbados in the Caribbean. Thanks to the colony’s founding by religious dissenters and its generally tolerant attitudes, Jews received official legal protection from the colony’s Assembly in 1684. Newport’s Jewish community eventually thrived as ship owners, traders and even spermacetti (whale oil) dealers, all attracted to this cosmopolitan, commercial seaport.

Newport’s trade with the West Indies, rather than with England, was responsible for the city’s growth and wealth, and its Jews had contacts with co-religionists in the Caribbean. Newport eventually rivaled New York as a shipping center, and virtually all the Jews in New England lived in Newport. Aaron Lopez, one of the most successful shipping magnates and maybe even the wealthiest Jew in America in his day, refused to allow any of his ships to set sail on the Sabbath. Some Jewish ship owners participated as privateers in the American Revolution.

The city was occupied by the British and went into decline, as did its Jewish community, which had disappeared by 1822. Providence, the Rhode Island state capital to the north, gradually replaced Newport as the state’s center of Jewish life, where Jews were particularly active in making it a major center of jewelry production.

Originally known as Yeshuat Israel, the congregation adopted the name of Touro Synagogue after the American Revolution in honor of Newport natives and benefactors Abraham and Judah Touro, sons of Isaac Touro, the Dutch-born hazzan of the congregation. The congregation was among America’s earliest historic preservationists, a role shared with Commodore Uriah Levy for preserving Thomas Jefferson’s Monticello estate later in the 19th century.

“My family and I went to Touro Synagogue,” Slom tells JNS.org. “I went to the United Hebrew [school], which included all the Jewish kids who lived on Aquidneck Island [which includes Newport]. Some of the girls in my group had a confirmation, but not a bat mitzvah. I don’t think that girls were bat mitzvahed in those days. Many years later a group of the ladies had a program similar to one.”

Stanley Jaffe, now 81 and retired in Florida, was born in Brooklyn and arrived in Newport when he was just eight days old. His father Ralph  moved to Newport in the early 1920s when Stanley’s grandfather came to work with a cousin in the painting and wallpapering business. Ralph and his wife,Betty owned and operated a paint and hardware store known simply as “Jaffes” on Newport’s famed waterfront for more than 50 years.

The Newport Jewish community was very small, recalls Stanley Jaffe, who enjoyed fishing and was a member of the Newport Rifle Club. He tells JNS.org that he studied at daily afternoon Hebrew school at the Jewish community center across the street from Touro Synagogue and became a bar mitzvah at Touro in August 1945 while his father was serving in the U.S. Army in the Philippines.

Two famous American poems hold a place in Newport’s Jewish history. In the summer of 1852, Henry Wadsworth Longfellow visited and was inspired to write the now-classic “The Jewish Cemetery at Newport,” which begins:

How strange it seems! These Hebrews in their graves,
Close by the street of this fair seaport town,
Silent beside the never-silent waves,
At rest in all this moving up and down!

New Yorker Emma Lazarus frequented Newport and in 1867, at the age of 18, she wrote “In the Jewish Synagogue of Newport.” But, of course, Lazarus is best known for “The New Colossus,” her ode to another landmark in another famed seaport where Jews have made their mark: New York’s Statue of Liberty.

Today, the congregation known as Jeshuat Israel that worships in Touro Synagogue comprises about 140 member families and is led by Rabbi Dr. Marc Mandel. The synagogue and Loeb Center are often visited by Jews, many of whom are observant and come as part of school groups. The traditionally dressed Orthodox men and women can often be seen walking the narrow streets of Newport. They are welcomed on Shabbat, as the synagogue’s grounds are enclosed within an eruv (which enables one to carry items on Shabbat) that also surrounds a kosher bed and breakfast called the Admiral Weaver Inn.

In addition to once hosting the America’s Cup yachts, its famed mansions of the Gilded Age, the stunning Cliff Walk, the Tennis Hall of Fame and other attractions, Newport was also the setting for the Sonny Von Bulow murder trial in which her widower, the wealthy heir Claus Von Bulow, was successfully defended by famed Jewish lawyer Alan Dershowitz.

The otherwise generally good news about Newport is marred by a lengthy and long-brewing legal dispute between Touro Synagogue and New York’s Congregation Shearith Israel, the nation’s oldest Jewish congregation, which is claiming ownership of the Newport synagogue and its religious artifacts.

This dispute recently came to a head when Shearith Israel objected to Touro’s plans to sell original bells to a museum for a seven-figure amount. Likewise, the building of the Loeb Center was not always a smooth process, and there was tension between the synagogue and the wealthy benefactor, who traced his family’s roots back to the Touros.