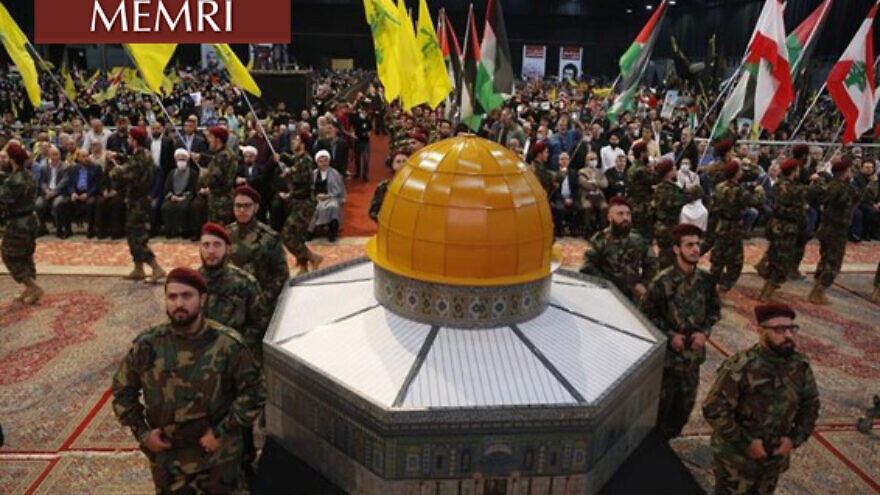 Hezbollah members with a model of the Dome of the Rock at a Quds Day (“Jerusalem Day”) rally in Beirut on April 29, 2022. Source: Alahednews.com.lb via MEMRI.
Spread the word.
Help JNS grow!
Share now:

(May 4, 2022 / JNS) Like every year at the annual Quds Day (“Jerusalem Day”) on the last Friday of the month-long Ramadan holiday, Iran and its proxies—Hezbollah, Hamas, Palestinian Islamic Jihad, the Houthi movement in Yemen and Iran-backed militias in Iraq—called for continued jihad against “the temporary entity” Israel.

According to the Middle East Media Research Institute (MEMRI) report, the events held this year on April 29 included conferences, rallies and processions in Tehran, Hezbollah’s stronghold in Beirut, and Gaza.

Furthermore, a Hamas delegation headed by a member of the movement’s political bureau, Khalil Al-Hayya, and Hamas official Osama Hamdan visited Iran and attended the main rally in Tehran.

The delegation, according to MEMRI, also met with Iranian officials, including the commander of the Islamic Revolutionary Guard Corps (IRGC), Gen. Hossein Salami.

Salami stated: “The latest developments in the Palestinian arena clearly reflect the fear of the Israeli entity and the might of the resistance. Thanks to the jihad fighters of the resistance, the [Islamic] nation is [now] a steadfast nation whose might causes the equations and the power balances in the region to shift. … The Palestinian people realized that its goals will be achieved only through jihad.”