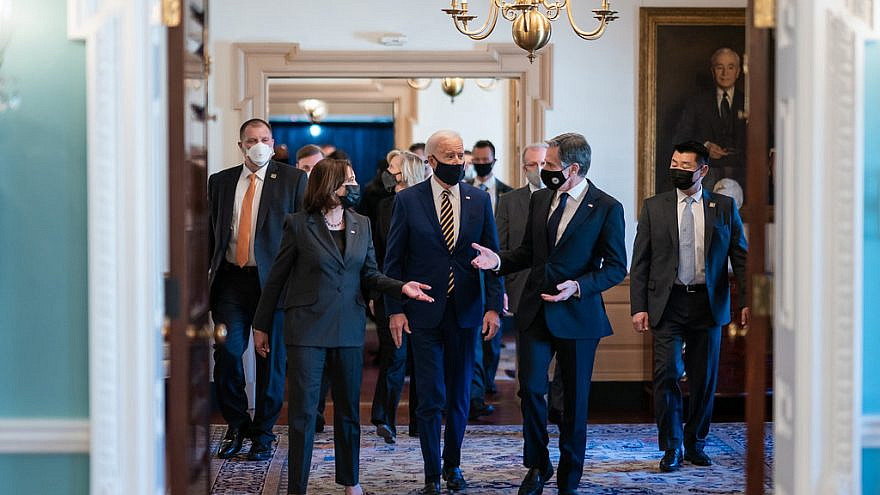 (February 19, 2021 / JNS) In the month he has taken office, U.S. President Joe Biden has been active in his moves to overturn policies enacted by his predecessor, Donald Trump. This week, Biden took a major step forward in seeking to return America to the 2015 Iranian nuclear deal, a signature accomplishment of the Obama administration that Trump sought to dismantle.

However, experts caution that Biden, who appears eager to “restore” U.S. engagement with allies and the international community, should not rush into negotiations with the Islamic regime, which has been hard-hit by sanctions imposed by the Trump administration after the United States withdrew from the deal in May 2018.

“While paving a path for diplomacy is imperative, the Biden team should not appear to be too eager for talks,” Behnam Ben Taleblu, a senior fellow at the Foundation for Defense of Democracies, told JNS. “This is something Iran could exploit at the negotiating table, just as it did from 2013-2015.”

He said, “Washington should be using this time to build bridges with allies abroad over Iran—not to signal support for talks that aim to claw-back a fast-expiring bad deal.”

The Biden administration made its first major step towards reviving the Iran nuclear deal on Thursday, announcing that it has agreed to meet with Iranian leaders and other world powers involved in the agreement.

“The United States would accept an invitation from the European Union High Representative to attend a meeting of the P5+1 and Iran to discuss a diplomatic way forward on Iran’s nuclear program,” U.S. State Department spokesman Ned Price said in a statement.

Biden has said he would be willing to lift new sanctions imposed by former Trump if Iran returned to compliance with the deal.

As a goodwill gesture, the administration also stated it would withdraw a demand last fall that the U.N. Security Council enforce “snapback sanctions” against Tehran, which the Trump administration had pushed for violating the deal. Additionally, Biden said it will lift travel restrictions on Iranians who seek to enter the United States to attend meetings at the United Nations.

“The decisions are an expected step towards fulfilling Biden’s commitment to reenter the JCPOA if Iran returns to compliance. Biden’s approach is much more aligned with America’s European partners, who remain committed to the JCPOA,” Ari Cicurel, a senior policy analyst at JINSA, told JNS.

“However, reentering the JCPOA would unnecessarily squander leverage from economic sanctions without getting any closer to the Biden Administration’s stated goal of negotiating a follow-on agreement over its regional aggression and ballistic missiles.”

The surprise announcement comes ahead of a Feb. 21 deadline by Iran’s parliament that it would block International Atomic Energy Agency inspectors’ access to its nuclear sites.

On Friday, Biden told world leaders gathered for a virtual Munich Security Conference that the United States was prepared to reopen talks with Tehran.

“The threat of nuclear proliferation continues to require careful diplomacy cooperation among us,” he said.

While Biden did not lay out a specific timetable for discussions, senior administration officials ahead of the Munich speech told reporters that “we are keen to sit down and hear what the Iranians have to say,” adding that with the invitation to talks, “I think we have a path forward to return to nuclear diplomacy in a way that could ultimately put us on a positive path.”

Reacting to the announcement, Israeli Prime Minister Benjamin Netanyahu said that going back to the original agreement would pave the way for Iran to acquire a nuclear bomb.

“Israel remains committed to preventing Iran from getting nuclear weapons, and its position on the nuclear agreement has not changed. Israel believes that going back to the old agreement will pave Iran’s path to a nuclear arsenal. Israel is in close contact with the United States on this matter,” said the Prime Minister’s Office.

Similarly, the Republican Jewish Coalition criticized the announcement, saying that “the Biden administration is reverting right back to the counterproductive policies of the Obama-Biden years.”

“Before taking a single step towards returning to negotiations with Iran, we should be insisting that Iran fulfill their existing international obligations,” Matt Brooks, RJC’s executive director, said in a statement. “Iran must be transparent about their nuclear-weapons program, cease their illegal ballistic-missile program, end their funding of terrorism, and stop holding hostage innocent citizens of the U.S. and our allies.”

‘A very different picture as to Iran’s malign agenda’

Jason Brodsky, policy director of United Against Nuclear Iran, told JNS that “Iran isn’t responding to these gestures, including the removal of the terrorism sanctions on the Houthis, with goodwill. Instead, Tehran, its proxies and its partners are taking more hostages, rocketing and droning.”

Earlier this week, rocket attacks on the Erbil Air Base in Iraq injured five Americans and killed one foreign contractor. While it is still unclear who launched the recent attack, signs point to Iran or one of its militias in Iraq. Iran has been behind several past rocket attacks in the country, which led to Trump ordering the strike last year that killed Iran’s top military commander, Maj. Gen. Qassem Soleimani.

“While Europe and the United States keep releasing statement after statement extolling the virtues of multilateralism and the need for diplomacy, the reality on the ground in the region paints a very different picture as to Iran’s malign agenda,” said Brodsky.

It remains unclear if the Islamic regime will back down from its threats and respond to the overture. Iranian Foreign Minister Javad Zarif said on Twitter that Tehran was waiting for American and European officials to “demand an end to Trump’s legacy of #EconomicTerrorism against Iran.”

On Friday, the International Atomic Energy Agency also said that it found uranium particles at two Iranian sites it inspected after months of Iranian stonewalling, reported Reuters. While the report said that the sites had been inactive for decades, the evidence of undeclared nuclear activities may signal that Iran has not been acting in good faith.

Ben Taleblu said that the focus by the Biden administration on the nuclear deal is threatening again to separate it from Iran’s other malign activities throughout the region.

“A major challenge for the Biden team moving ahead is linkage,” he said. “The Biden team is de-linking the Iran nuclear threat from other matters. Not only does this resurrect the mistakes of the past, but the Islamic Republic simply does not see the world that way.”