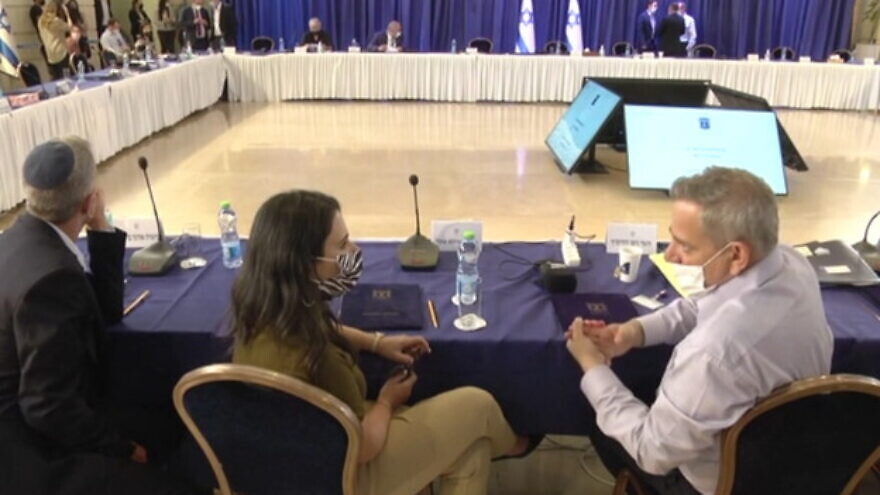 (September 13, 2021 / JNS) Imposing “green pass” rules on certain venues is needed only to pressure members of the public to get vaccinated, and not for medical reasons, Israeli Health Minister Nitzan Horowitz said on Sunday, ahead of the weekly Cabinet meeting.

Horowitz was caught on a hot mic telling this to Interior Minister Ayelet Shaked, who was also unaware that the conversation was being taped and would be broadcast on Channel 12 News.

In response to Shaked’s suggestion that the “green pass” could be removed as a requirement for outdoor seating at restaurants, Horowitz said: “For swimming pools, too, not just in restaurants.”

“Epidemiologically, it’s true,” said Horowitz, adding, “The thing is, I’m telling you, our problem is people who don’t get vaccinated. We need [to influence] them a bit; otherwise, we won’t get out of this [pandemic situation].”

Currently, he said, “there is a kind of universality to the ‘green pass’ system, other than at malls, where I think it should be imposed, [because] now it’s clear that it applies nowhere.”

Horowitz went on to explain that the only way for there to be no exceptions—since people wonder why if it’s ok not to have a pass for pools “then why for water parks, outdoor facilities and sports?”—is to have the regulations be uniformly enforced.

On the one hand, he added, “we don’t want to do things that have no medical justification. But I’m telling you that we have a problem. The ‘green pass’ isn’t even being enforced; certainly not in the Arab sector, where it doesn’t exist at all. And I’m seeing the effect on the hospitals.”

Horowitz and Shaked were joined by Intelligence Minister Elazar Stern, who, also unaware that the conversation was on tape, expressed disgust with the unvaccinated.

“It’s annoying that they’re taking up the [hospital] beds,” he said. To which Horowitz replied: “Those in intensive care, yes.”

Israeli Prime Minister Naftali Bennett subsequently told the Cabinet that tolerance towards those who choose not to get vaccinated has ended, according to Channel 12.